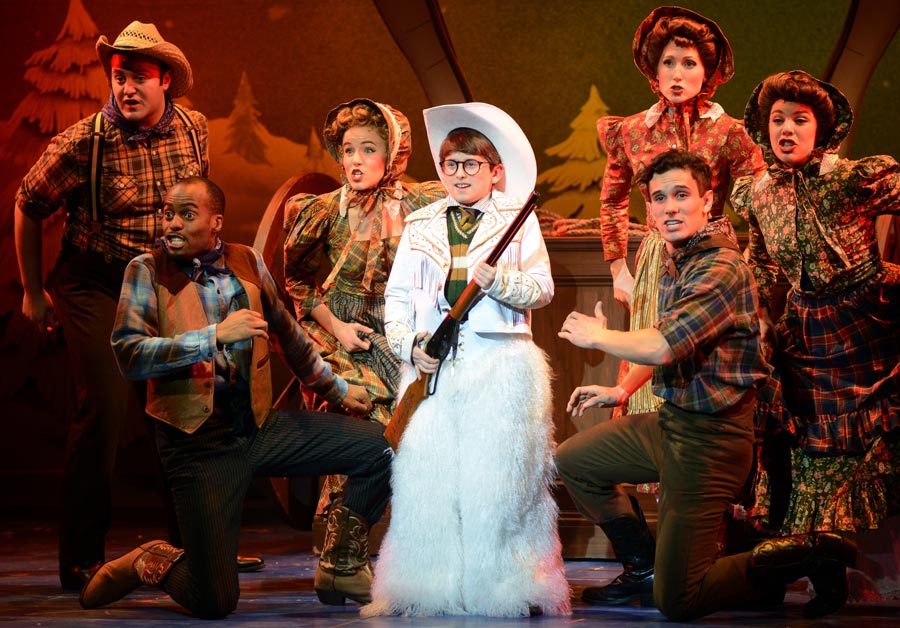 The days may be getting shorter…but that means more nighttime and more options for after dark. It may not be festival season yet, but the winter months may just be the best time of year to visit New Orleans. The city is certainly a busy place no matter what season, but the holidays offer a particularly sophisticated lineup of entertainment. Seasonal decorations and lighting accent the beauty of the city’s historical theaters and halls. The weather is milder than most locales, so no need to coat check those puffy winter coats. ‘Tis the season for visiting and reunions, and the following are a sampling of just that. Big national acts bring big shows, and equally impressive prodigal sons and daughters return to the city of their roots for performances at all the most beloved venues.

Dear Evan Hansen, New Orleans is glad to see you at The Saenger November 5-10. Premiering in New York just three years ago, the musical has already garnered nine Tony-award nominations and six wins. Originator Benj Pasek based the story of acceptance and identity on a real event from his high school.

Before we give thanks with turkey and yam and rock around the Christmas tree, the month of November offers a season of legendary rock shows that we can all give thanks for. Following a more than eight year semi-hiatus, the blues inspired, indie rock supergroup The Raconteurs visits The Fillmore on November 7, just a few months following the release of their new album, Help Us Stranger.

The individual Jonas brothers may have ventured out into separate acting and singing careers--and high-profile marriages--but the band is back together for the Happiness Begins Tour. Their appearance at The Smoothie King Center on November 12 marks their ninth headlining tour. Certainly these boys are more than suckers, but concert goers will likely sing along to the band’s latest hit “Sucker” during and after the show!

Just as bands have members, the month of November is one to remember; and on the day of 19, be the first on the scene to treat yourself to The Elf on the Shelf! The Saenger Theater hosts the brand new live musical based on the widely popular children’s book of the same name. The show follows Scout Elf as he and his friends from the North Pole try to save Christmas for his new human family.

Elves aren’t the only ethereal beings in town. The Civic hosts the heavenly sounds of Angel Olsen, who lends her vocals to Mark Ronson’s hit album Late Night Feelings. The November 5 all-ages show opens with New York based Vagabon. The venue changes up its offerings a few weeks later, on November 22, when 2.4 million-follower, millennial Instagram queen Claudia Oshry brings her “Girl with No Job” comedic stylings as part of the Dirty Jeans Tour.

Speaking of comedy…fast talking star of Rush Hour Chris Tucker stands up at The Saenger on November 30. After a series of feature film successes in the 1990s, anchored by hit Rush Hour, Tucker scaled back his professional life to focus on humanitarian work in the early 2000s before returning to the stage in 2011. Tucker previously appeared at The Saenger Theater alongside fellow comedian Dave Chapelle.

The kickoff of the holiday season isn’t all about mega popstars and social media stars invading The Big Easy. New Orleans local musicians get to show off their international appeal in the months leading up to Carnival and festival season.

November 15 marks the Fourth Annual “The Last Waltz,” a local edition of a tradition held in many cities across the country that celebrates Martin Scorsese’s documentary of the same name. The film marked the final performance of mega group The Band—an amalgam of legendary musicians that featured a more than representative sampling of New Orleans greats. This event, held at The Joy Theater, boasts a similarly impressive lineup of contemporary favorites including Bonerama Horns, Honey Island Swamp Band, The Iceman Special, Papa Mali, Johnny Sketch, and members of The Funky Meters, The Radiators, Galactic, The Revivalists, Anders Osborne Band, and many more.

Jazz artist PJ Morton, born and raised in New Orleans but known globally for his role as ensemble member in supergroup Maroon 5, brings his Paul Tour to The House of Blues on November 29. Morton continues to tour and record as he also works on a restoration project to restore jazz legend Buddy Bolden’s house.

Guess who else is “Home for the Holidays”? Irma Thomas, Trombone Shorty, and Kermit Ruffins headline this annual event at House of Blues. Benefitting the Daniel Price Memorial Fund for Aspiring Artists, the concert raises money for visual art and music students at NOCCA (New Orleans Center for Creative Arts). The December 20 concert follows a buffet and open bar event for silver and gold ticket holders.

Of course, it just wouldn’t be the holiday season without mention of Ebenezer Scrooge, dancing sugar plum fairies, and maybe a few surprises…

Le Petit Theater revives the theatrical version of A Christmas Carol for a second year, running December 6-23. Directed by Artistic Director Maxwell Williams, the show features twenty artists from the theater’s Young Conservatory Program along the adult ensemble. The show runs Friday through Sunday each weekend, including matinees on Saturday and Sunday, with additional Thursday and Monday performances for the closing weekend.

As the holidays approach, it’s time to treat all the good girls and boys to some magical fun as well! The Saenger Theater offers Kidz Bop World Tour on December 8 and Disney Jr. Holiday Party on December 10. Kidz Bop, started in 2001, offer G-rated versions of popular music that both kids and parents can sing along to! The Sunday afternoon performance offers an early start at 4 pm. The Disney Jr. show, with a 6 pm curtain, also lets children enjoy their favorite characters early enough for a weekday bedtime. A special visit from Santa Clause will surely inspire the little ones for weeks to come.

Mystery Science Theater 3000 Live! Visits The Mahalia Jackson Center for Performing Arts on December 10. Based on the cult hit television show that has run in multiple versions since 1988, the live stage version features episode “No Retreat, No Surrender” as part of The Great Cheesy Movie Circus Tour.

Here We Go Again…but for the first time in five years! Larger than life, never to be forgotten, and barely aging, the latest tour of legendary pop singer Cher brings the diva and her distinctive contralto to The Smoothie King Center on December 13. In addition to a catalogue of forty years of hits, fan can expect to enjoy highlights from the diva’s recent ABBA tribute album.

New Orleans Ballet Theater runs six performances of The Nutcracker on December 14 and 21 (2pm matinee and 7pm) and December 15 and 22 (2pm matinee only). A preview of the locally cast show can be found at www.neworleansballettheatre.com/nutcracker. The historic Orpheum Theater provides the perfect local for this classic two-act dance fantasy.

New Year’s Eve in The Crescent City surely provides a rich array of offerings, but local favorites The Revivalists offer a signature affair: they have made a tradition of returning to their hometown to ring in the new year with their most dedicated fans. The Fillmore hosts on December 31.

Just because the month of January is sandwiched between the holidays and Mardi Gras does not mean there’s nothing to do! In fact, French Quarter stages bring Broadway to New Orleans in the new year. Le Petit Theater resumes its regular season on January 17 for a run of Something Rotten that lasts through February 2. This comedy, set in 1595, tells the actually quite sweet tale of two brothers who create the world’s first musical.

The Saenger Theater presents Miss Saigon for a limited run January 21-26. One of the most enduring theatrical experiences of our time, the show contemporizes the opera Madame Butterfly, setting the love story during the final days of the Vietnam War. This show is recommended for ages 17 and up.