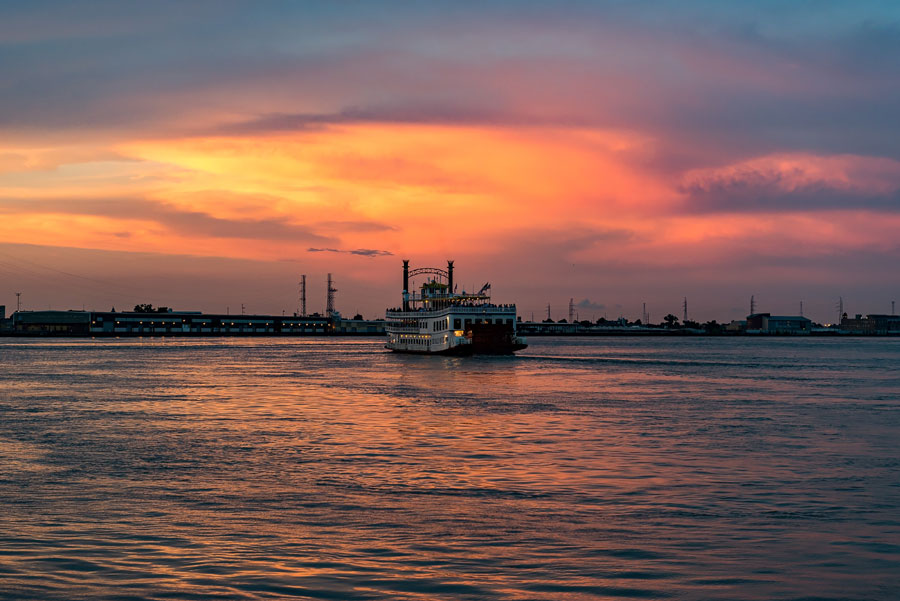 On September 22nd through 27th, the New Orleans Jazz Museum’s NOLA River Fest will virtually celebrate the cultural, economic, environmental & inspirational impacts and contributions of the Mississippi River to the Crescent City. For centuries, Old Man River has been an important route for trade and travel, has sustained livelihoods, offers opportunities for recreation, and has a significant role in the culture, health and livelihoods of people along its long route.

The Mississippi River, the longest river of North America, drains with its major tributaries an area of approximately 1.2 million square miles or about one-eighth of the entire continent. As rich as the literary tradition that grew up along the Mississippi is, the river’s musical legacy is arguably even more profound. The music that developed largely has been the product of the cultural cross-pollination of black and white folk music and popular styles, with roots in both West Africa and Europe. Growing from the creations of African American slaves who were prevented from maintaining their native musical traditions and felt the need to substitute some homegrown form of musical expression, jazz evolved in the complex cultural mix of New Orleans and traveled up the river, finding its way to cities north and beyond. Witness the journeys of jazz pioneers King Oliver and Louis Armstrong at the museum. Before the emergence of jazz, the predominant style of American popular music was ragtime. It evolved in the last decades of the 19th century in the playing of honky-tonk pianists along the Mississippi and Missouri rivers and reached its peak in the St. Louis-based career of Scott Joplin.

The Mississippi River may be the most musical river in the entire world! Drum songs, folk songs, blues and jazz were all created and recreated along its banks. Musicians have been truly prolific not only in the sheer volume of works about the river, but by the need to create entirely new musical styles just so they could describe their feelings about themselves and the river. NOLA River Fest will virtually celebrate the environmental, cultural, and economic impact of the Mississippi River and the land it built through live music, presentations, panels, and hopefully walking tours. It will include a six day series of panels and performances dedicated to the legacy of the Mississippi River, its culture, and its inhabitants. Livestreamed from the Jazz Museum’s Facebook page, NOLA River Fest will be a virtual space for connection and conversation, exploring why the Mississippi River should be conserved and celebrated while investigating and celebrating the connections that waterways enable between cultures.

Tune in to learn about the rich history of our Mississippi River community or to simply enjoy live local music from home! Free to all, NOLA River Fest’s livestream will be accessible online to audiences here and around the world.

Meanwhile, don your mask and come explore the Jazz Museum in the town where jazz was born! Visit the event calendar at nolajazzmuseum.org for their popular Jazz on the Balcony virtual concert series. If you are in town, grab a chair or blanket and a curbside picnic and join others on the lush lawn of the historic U.S. Mint for live local music! If not, tune in online and shake a tail feather wherever you are!