Down by the Riverfront in the French Quarter 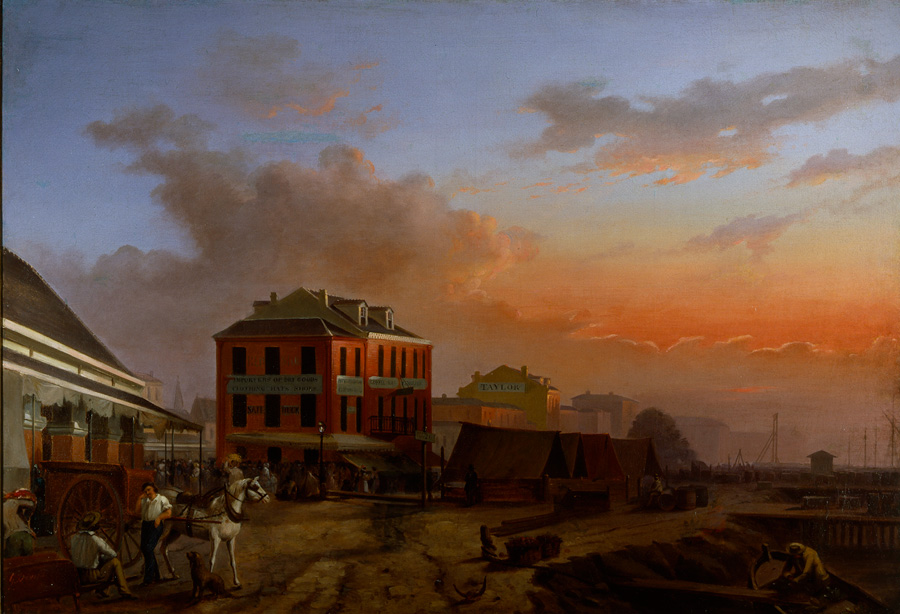 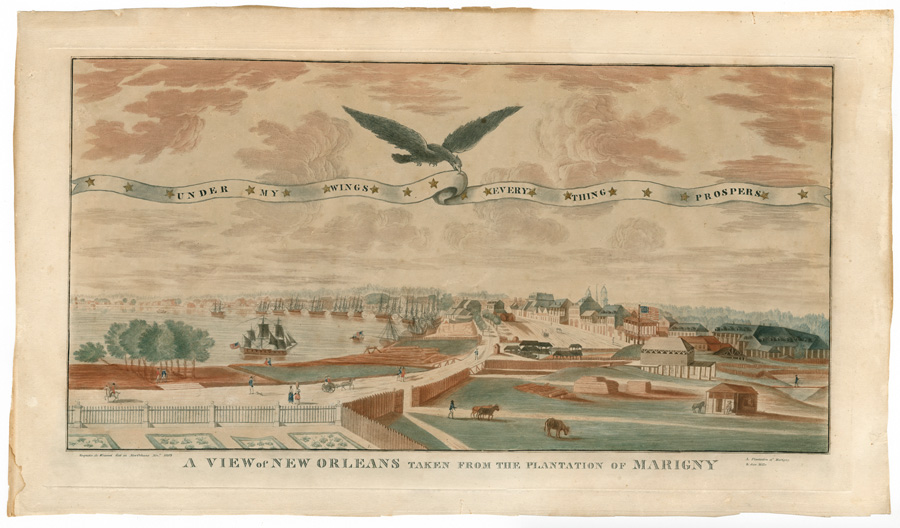 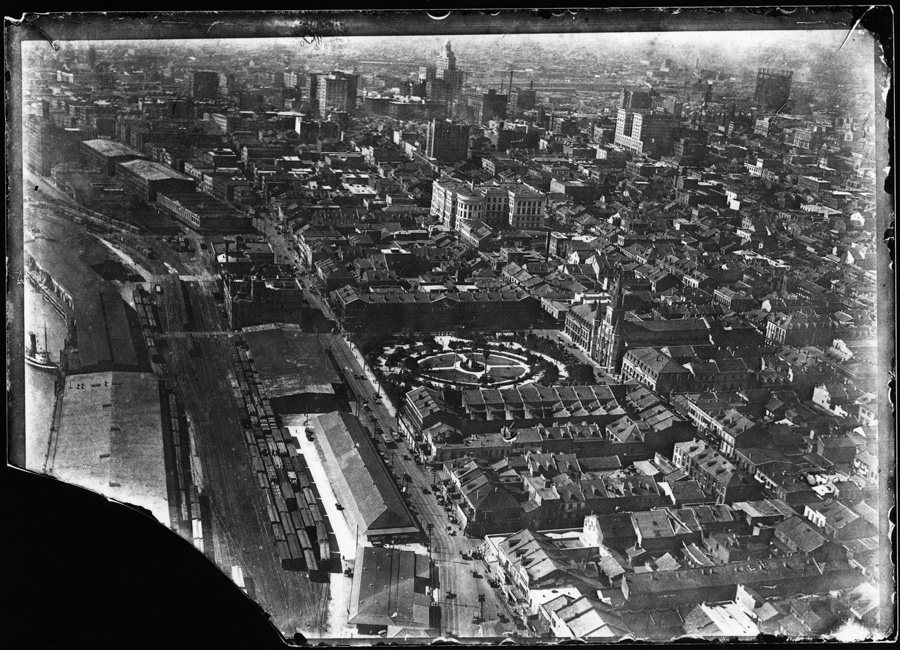 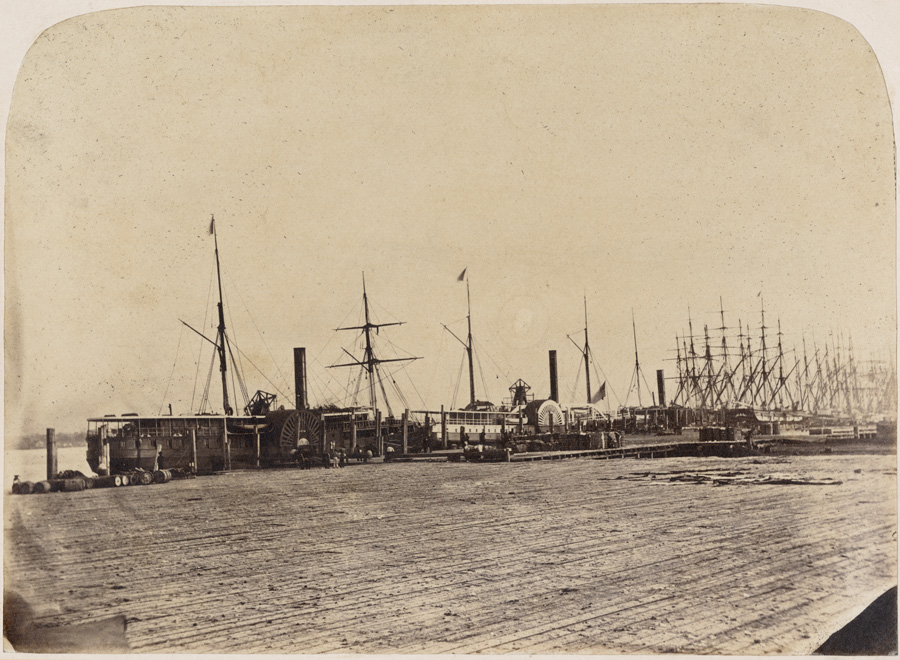 "The Crescent City" - the traditional nickname of New Orleans - refers to the Mississippi River's sweeping bend at the French Quarter, the site of the original city, founded in 1718. The Quarter is on the river's natural levee - ancient silt deposits from floods that created ground higher than found in nearby swamps - but its location was flood-prone, necessitating the construction in 1722 of a low levee that has since been considerably expanded.

In the early days, the river ran alongside Rue de la Levee, today North Peters and Decatur streets. By 1800 new land separated the street and water by several hundred feet at the Place d'Armes - now Jackson Square - and by as much as a thousand feet at Canal Street. Called the batture, this new land was the result of the natural build-up of silt, increased by ships docked at the levee and by poles deliberately driven into the riverbank. The question of who owned this land was a thorny one, but it was eventually settled by compromise granting unsold land to the city to be sold, while people who had already acquired properties were allowed to keep it. By the 1850s wharves and warehouses were being built on the batture.

Native Americans traditionally traded on the riverbank near today's French Market, and early European settlers followed suit. Complaints of poor sanitation and price gouging prompted Spanish officials (Spain owned Louisiana after 1762) to build an enclosed, regulated market at Chartres and Dumaine in 1779. After burning in the great citywide fire of 1788, the market was relocated to the batture between St. Ann and Dumaine, near today's market. It was on the edge of the river, and ladders were extended down to boats where game and fish were sold. Other vendors set up shop on the levee using tables, umbrellas and lean-tos, and some African American slaves were allowed to sell produce they had grown themselves.

By the late 18th century, a gravel walkway was laid atop the levee. Here ships could unload and people could promenade. There was a shady grove of orange trees near Toulouse Street, and farther downriver near the market was a double row of willows.

The first steamboat - aptly named New Orleans - to reach the Crescent City arrived in 1812, docking near the Place d'Armes. By the 1840s the gravel walk and trees were gone, replaced by wooden piers jutting into the river. Here sailing ships, flatboats, keelboats, barges and steamboats were so closely docked that it was said people could walk the decks for miles without getting their feet wet. Each type of vessel was required to dock at a designated location. Steamboats docked from Jackson Square to beyond Canal Street, while downstream were oceangoing ships. In between, Lugger's Landing at the French Market was reserved for small boats carrying oysters and other market goods.

By the 1860s the piers had been replaced by a wide wooden wharf that extended for miles. The uncovered wharf was a lively annex to the city: a crowded, animated world of carriages, carts, mules, dray horses, laborers, stevedores, traders, brokers and vendors stirring amid cotton bales, barrels of sugar, stacks of lumber, bags of coffee. There were also visitors coming off ships, steamboats and trains. The wharf continued as a popular promenade and, in 1882, became brighter when the city's first electric arc lights were installed along the Quarter's riverfront.

During the 1860s the first railroad tracks were built beside the Quarter's wharves, and in 1867 the city sold the right-of-way to lay tracks between Elysian Fields and Canal Street to the Pontchartrain Railroad. This became part of the Louisville and Nashville Railroad. The L&N terminal, built in 1904 near today's Canal Place (and no longer standing), is where Vivien Leigh appeared as Blanche DuBois in opening shots for the 1951 film of Tennessee Williams's A Streetcar Named Desire.

In 1879 the city leased the block of Decatur in front of Jackson Square to the Louisiana and Texas Railroad and Steamship Company for a huge warehouse. Nearby, the Jackson (JAX) Brewery, which still stands, was built in 1892. At the same time, sugar sheds, a sugar exchange and a massive 12-story sugar refinery stood between Customhouse (now Iberville) and Conti Streets near today's Canal Place.

Wharves were haphazardly leased until 1896, when a board of commissioners was created and replaced open wooden wharves with covered wharf sheds that paralleled the river and blocked its view from the Quarter. The Quarter became even more cut off from the river in 1908 when the Public Belt Railroad was created alongside the wharves to help transfer goods between the wharves and other trains. The sugar refinery operations moved to suburban Arabi in 1912, and the old building sat derelict until it was torn down in the 1940s to make way for parking lots.

In 1946 an unsuccessful proposal called for replacing wharves across from Jackson Square with a riverside plaza. About the same time, the Louisiana and Texas warehouse burned and was replaced by Washington Park. Plans for a riverfront expressway running alongside the Quarter in the 1960s were scrapped in the wake of loud public outcry.

Several wharves were finally removed, opening part of the Quarter back up to the river, and the redevelopment of the area surrounding Jackson Square began in 1972. The streets around the square, except for Decatur, were turned into a pedestrian mall, while steep steps and an observation platform were built across Decatur Street. A plank walkway was built leading to the Moonwalk, a scenic boardwalk overlooking the river.

In 1988 the Dorothy and Malcolm Woldenberg Foundation presented a $5 million gift to the Audubon Institute for construction of Woldenberg Park using the old Bienville Street Wharf. Dedicated in 1989, the park is adjacent to the Audubon Institute's Aquarium of the Americas, which opened in 1990. Today about half the Quarter's riverfront is open to the Mississippi, just as it was in the 18th and 19th centuries.