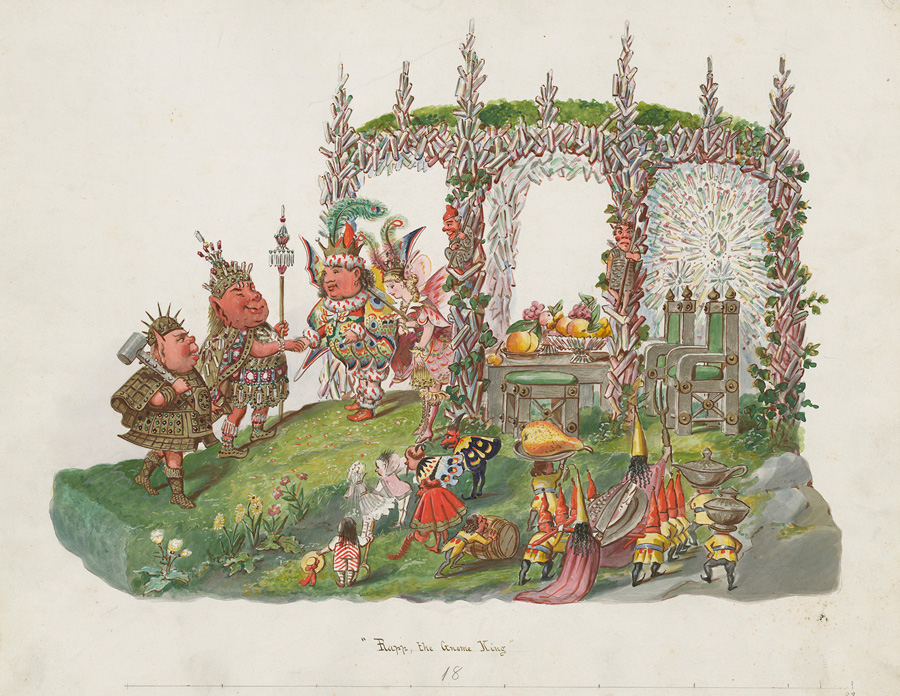 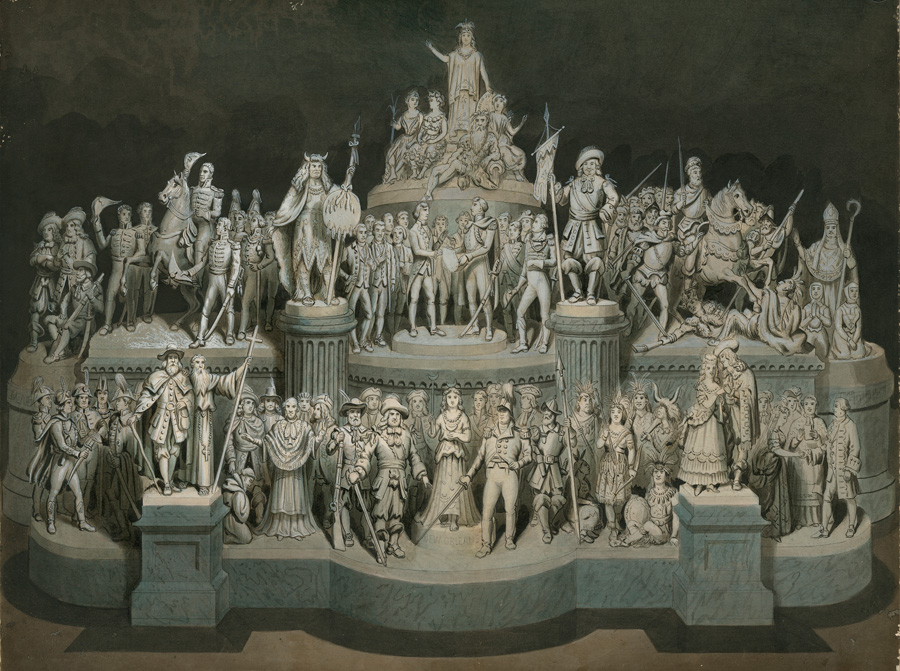 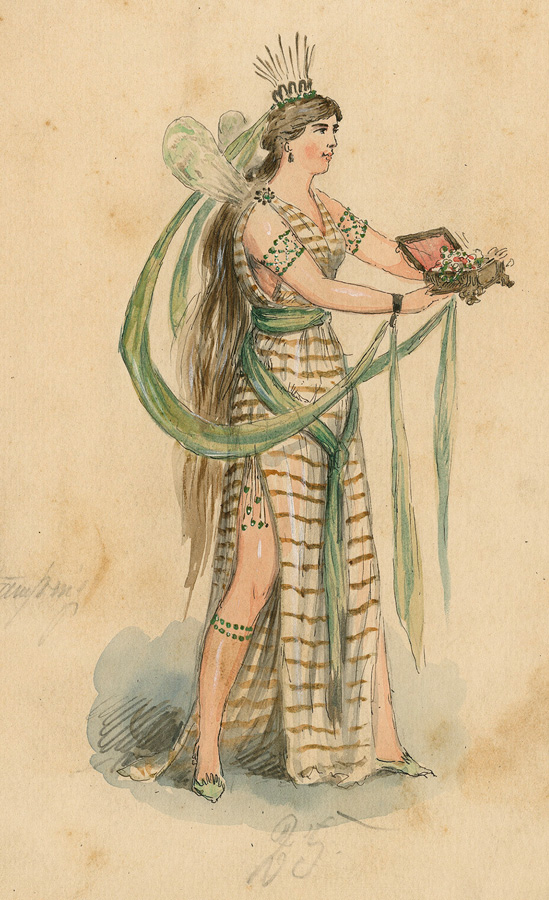 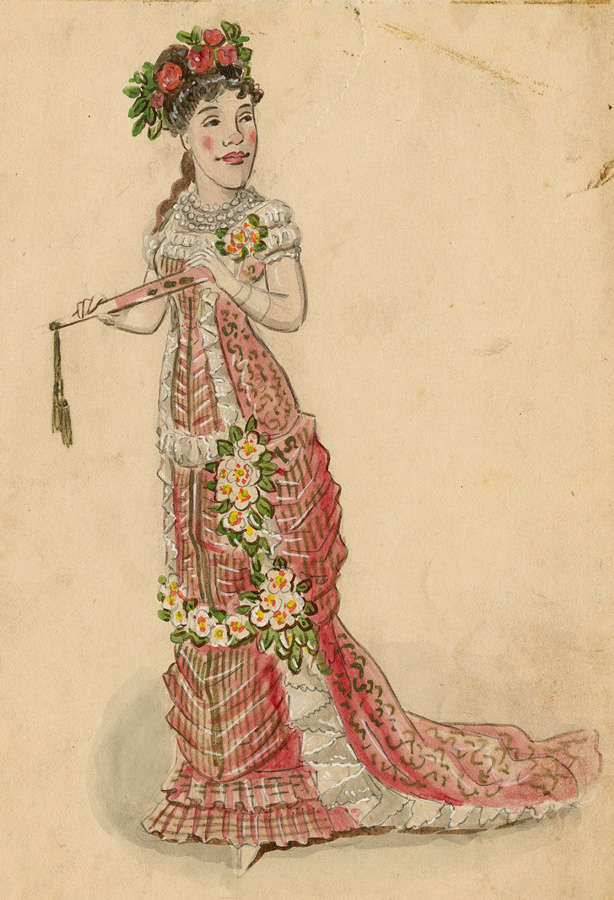 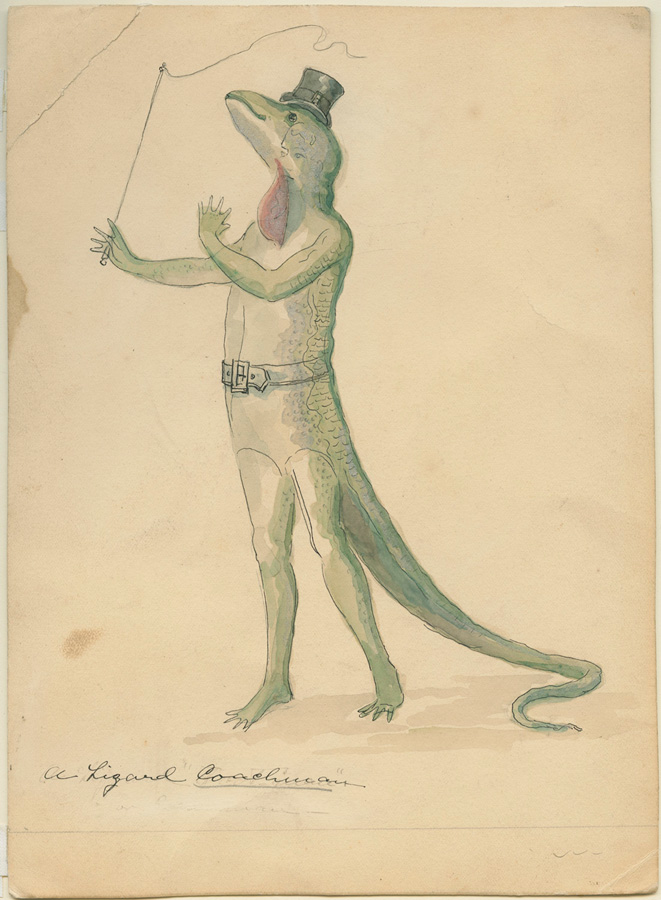 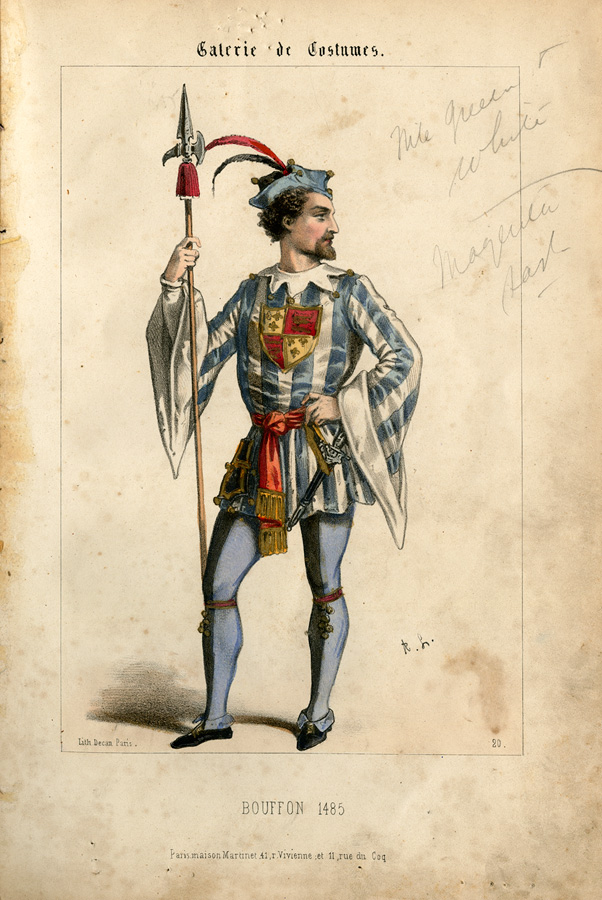 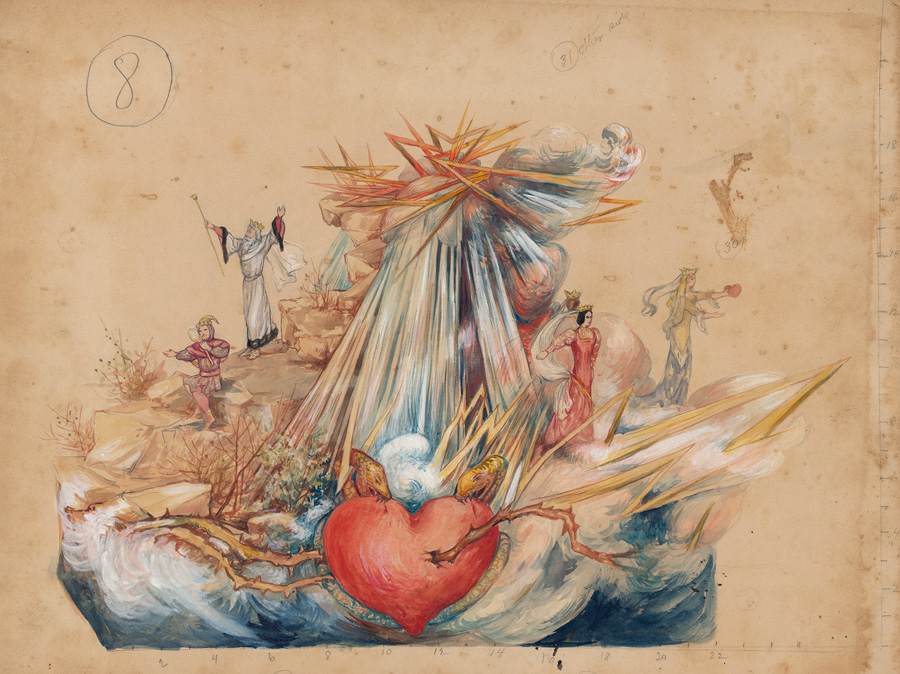 "Mrs. Betat's Sudden Death. Stricken With Heart Disease During the Strain of Carnival Work," screams the headline of an obituary run in the Daily Picayune on Thursday, Jan. 21, 1904. Although some people view Mardi Gras as a time to relax and party, for many the Carnival season is anything but relaxing. Each year costumers must top their creations of the season before, designing finery fit for kings and queens, and Louise Betat was one of the busiest.

Commonly known as "Mrs. A. Betat," Louise Betat was a well-known decorator and costumer in New Orleans. She and her husband, John Achille Betat, ran a shop on Canal Street which produced flags, banners, regalia and badges, as well as Carnival ephemerae (called ephemerae because it is only meant to be used one season). The Betats created adornments for many of the krewes (Carnival organizations) and mystic society balls, including costumes.

A Parisian regalia book, which combined 39 theatrical costume plates, provided inspiration for Mrs. Betat. The plates, which were published by Maison Martinet between 1835 and 1850, seem to have been combined into a book by Mrs. Betat herself. Each of the plates, which are in no particular order, has the Betat shop stamp on the reverse. The first plate, depicting a Bouffon (or jester) costume from 1485, has a hand-written notation for a "Nile Green and white/Magenta sash."

Costuming is one of the most critical aspects of New Orleans Carnival. It not only sets the stage, but provides the foundation for the success of Carnival, helping to create the illusion and magic expected of the season. Costuming during Carnival dates back to the ancient festivals of Greece and Rome. The Roman festival of Saturnalia, in particular, was known for people dressing in role-reversing costumes, when masters and slaves traded places for the day.

That aspect continued through the centuries to New Orleans Mardi Gras, where both transracial and transgender costuming have been popular since the beginning. Especially in the early days of the krewes, where the members were all male, every graceful female costume that the designers created was meant to be worn by a man. Prominent businessmen and members of the community happily paraded in delicate and dainty outfits with their fellow krewe members.

This policy of transgender and transracial masking also extended to the street maskers and both the public and private masquerade balls. In fact, before the development of organized krewes, masquerade balls, with requisite costuming, were among the most important social events of the city. Just 25 years after the founding of New Orleans, the city's first Carnival ball was held in 1743. By the year 1850, more than 200 balls were presented annually, spanning the whole year and not just the official Carnival season. With the advent of parading krewes in the latter half of the 19th century, the number of balls, and costumes, increased ten-fold.

First parading in 1857, the Mistick Krewe of Comus forever changed the face of New Orleans Mardi Gras, providing an organized parade that all could attend. Other krewes quickly followed - the Twelfth Night Revelers in 1870, the Krewe of Rex and the Knights of Momus in 1872, and the Krewe of Proteus in 1882. Masquerade balls were still a popular pastime in the city, but with the creation of krewes came the start of Carnival balls held by the individual krewes.

At each of these invitation-required balls, krewe members were the only ones dressed in costume. All of their guests were obliged to be in costume de rigueur or formally attired in white tie and tails for the gentlemen and formal gowns for the ladies. Krewes provided several sources of Mardi Gras merriment at these balls, including the tableau (scenes depicting the theme acted out by krewe members), call out dances (where costumed krewe members "called out" specific partners from the guests to dance) and the presentation of the court (which usually consisted of a king, queen, maids and dukes/escorts).

To design these fantastic parades and balls, the krewes turned to some of the city's talented artists. These Carnival illustrators created sketches for everything from costumes to floats, tableaus, invitations, masks, accessories and even jewelry for the krewe's royalty. One of the earliest was Charles Briton, a native Swede, who moved to Bienville Street in the French Quarter around 1865. His first known Mardi Gras design was for the 1870 Comus tableau, titled "The History of Louisiana from 1539 to 1815. The tableau showed krewe members costumed as various historical figures, devised to resemble marble statues and posed on a stage.

Briton designed for all of the early krewes, including Comus, Twelfth Night Revelers, Momus, Rex and Proteus. After working on Carnival designs for only about 15 seasons, Briton passed away from failing health at the age of 44. His colleague and friend, Bror Anders Wikstrom, helped him complete the designs for the 1884 Rex parade, which was to be his last.

Wikstrom, another Swede, moved to New Orleans in 1883. Briton's successor with Rex, Wikstrom designed for the krewe for 25 years. He later took over creating for Proteus, working with them for 10 years, after Carlotta Bonnecaze ceased designing for the krewe. In 1909, just after finishing work on a parade commemorating Henry Hudson in New York, Wikstrom passed away from declining health. His last parade for Rex, which had been completed prior to his departure for New York, took to the streets in 1910.

Carlotta Bonnecaze, who designed solely for Proteus in the close of the 19th century, was the first female Carnival designer. Not much is known about her, though the Bonnecaze family is fairly well recorded. One of the only physical documentations to her existence is a series of sketches credited to her, which were donated to the Louisiana State Museum in 1922.

Two other early female Carnival designers were Virginia "Jennie" Wilkinson Wilde and Ceneilla Bower Alexander. Jennie Wilde, a native of the state of Georgia, created Carnival extravaganzas for Comus from 1891 to 1914. Known for her art noveau style, Wilde brought opulence to the Comus costumes and parades, with a lavish use of gold. During a trip to England in 1913, Wilde became ill and died at the age of 48. The last parade she designed, "Tales From Chaucer" rolled on Mardi Gras night 1914, the same night that Wilde was buried in Metairie Cemetery.

Ceneilla Bower Alexander, also a native of Georgia, was the designer for Rex after Wikstrom. She also created sketches for the Krewe of Nereus. The 1923 parade was the last that Alexander designed for Rex, though she continued to design the costumes that Rex wore for several years. Her working notes, housed in The Historic New Orleans Collection's manuscripts division, indicate some dissatisfaction on her part in the way that her designs were ultimately being executed. She retired from Carnival designing early, and lived until 1966, when she died at the age of 101.

Unfortunately, only a few of these artists' fabulous designs survive today, but there are designers and costumers continuing the tradition begun by the likes of Briton, Wikstrom, Bonnecaze and Betat, planning beautiful costumes and creations for every new Carnival season. The next time you see a Carnival costume or parade, take a second to stop and appreciate the history and the hard work that went into creating those masterpieces.