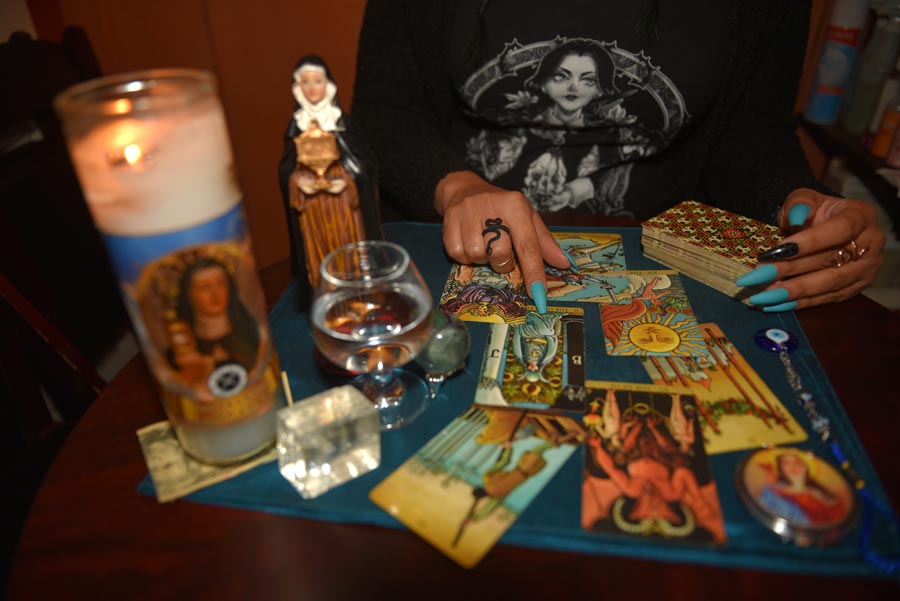 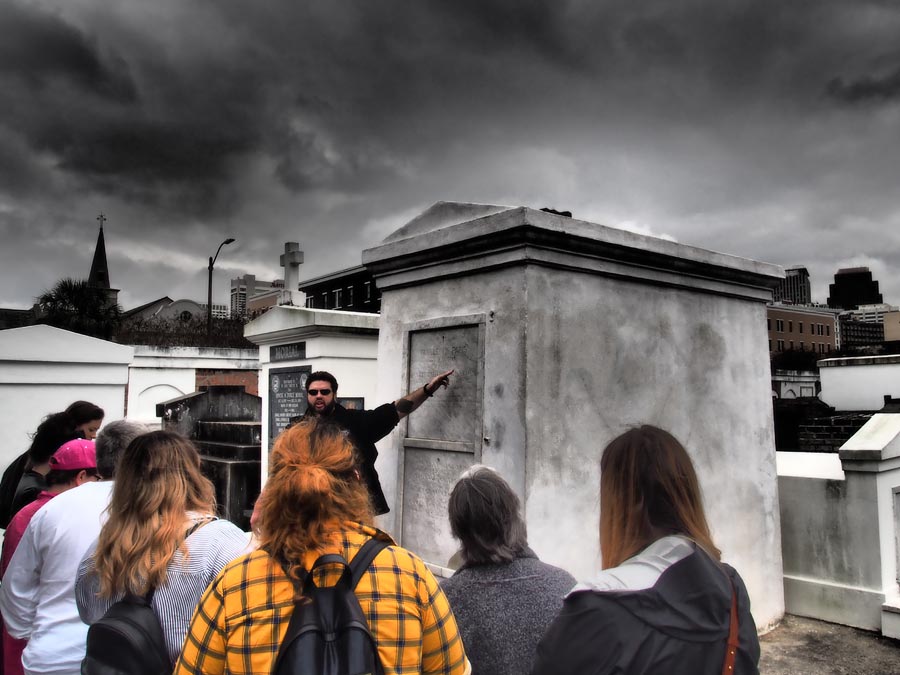 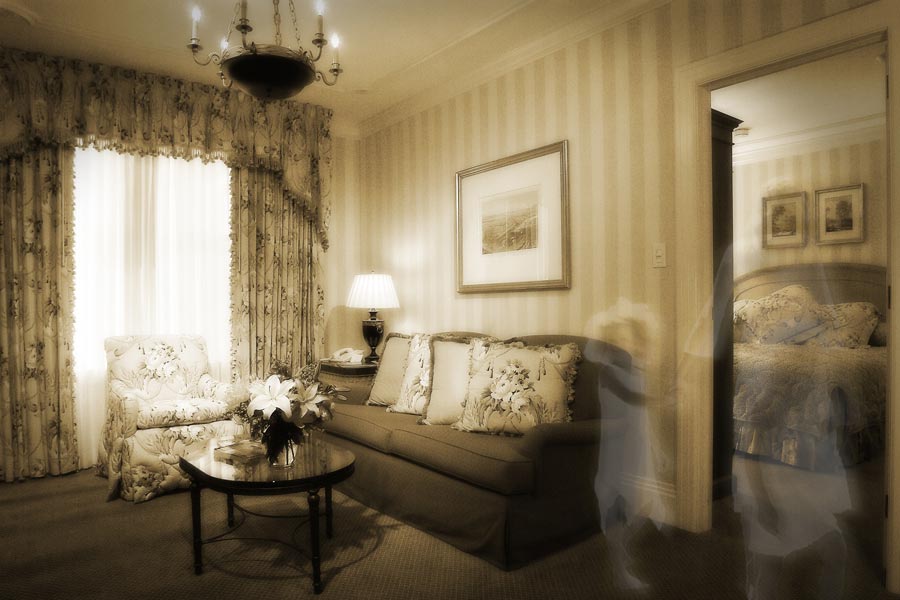 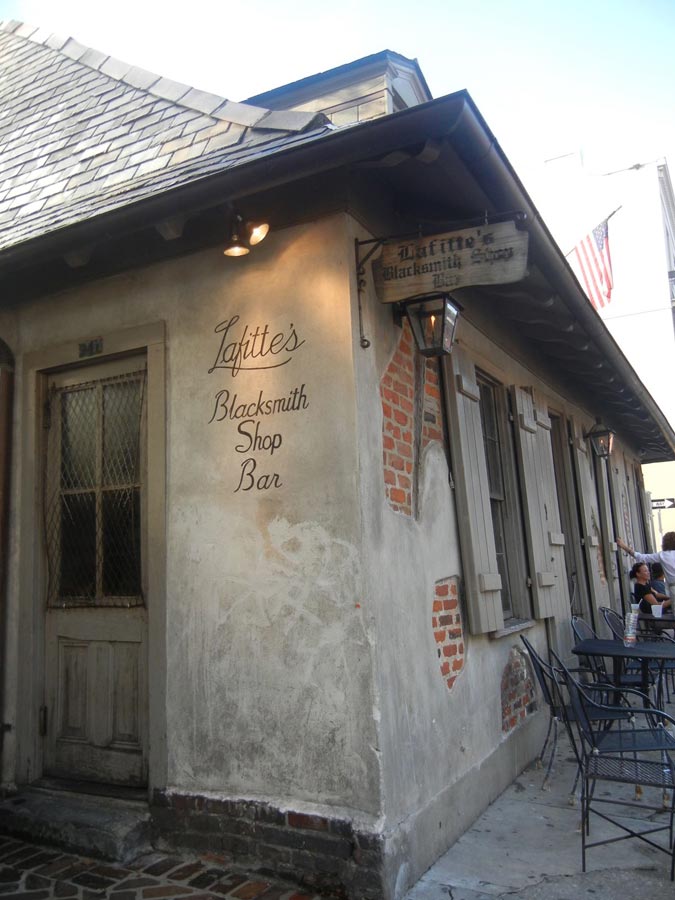 With over 300 years of mystery, the French Quarter has a deep and complex history. This colored past is preserved in the buildings, alleys, courtyards, and homes and within it many believe past spirits dwell. In the land of voodoo, vampires, and witchcraft, it’s no wonder that America’s most haunted city is rife with tales of restless spirits. Native Americans warned French settlers not to build a city on this “cursed land.” Stroll through the French Quarter on any given night and you’re likely to encounter an above-ground graveyard and a few cobwebbed 18th-century mansions with an enigmatic history. This city is a place where the dead refuse to rest; in fact, there is no solid ground to hold them.

My husband, Steve, and I live in New Orleans but we enjoy taking a stroll, having dinner, followed by a nightcap during the fall in the French Quarter. We were sauntering along the 800 block of Toulouse Street when I caught a hazy glimpse of an old woman appear out of nowhere. She was dressed in black with beads in her hand as she stepped into a doorway. Curious, we went to see where she went. As we approached the doorway, we felt a coolness and smelled a strange acrid aroma. Old yellowed mail was stuck in the door making it obvious that the door had not been opened recently. Goosebumps covered my arms and we went back to our hotel to research the area. Nearby is The Olivier House, a charming little hotel built in 1836 by Madame Olivier, a wealthy plantation owner. It was later owned by Elizabeth Locoul who branded her servants and was vicious and hateful. She always wore black and was never seen without her rosary. She wandered around mumbling the Rosary to herself and would scream and curse at anyone who interrupted her. Guests claim they see the ghost of a mysterious old woman dressed in black carrying rosary beads as she roams around the property cursing at staff and visitors. Elizabeth is often seen in the room where she died in 1884 at the age of 88. Is it possible that we saw Elizabeth?

There is also much mystery and folklore surrounding the origins and practice of Voodoo in New Orleans. Many French Quarter shops are dedicated to the magic and ritual of Voodoo and they will not only satisfy your curiosity, they may also put a spell on you! Every Halloween, we go to Voodoo Authentica’s free annual VoodooFest, held every Oct. 31, from 1 p.m. to 7 p.m. Since 1999, the festival has celebrated and shared Voodoo’s many invaluable contributions to our city's unique historic and present culture. Through entertaining musical presentations and educational lectures by local favorites, it endeavors to shed light on this widely misunderstood religion. Bring your drum, rattle or clapping hands and don’t miss the festival’s closing Ancestral Healing Ritual at 7 p.m.! Haunted by phantoms and the hovering mysteries of past tragedies, the French Quarter is a place where the spirits often find the coffin too confining; mysteries and histories combine to make this a very unique city. For an interesting yet eerie jaunt to learn about the character and traditions of the historically rich French Quarter, locally owned award-winning French Quarter Phantoms strives to show visitors our city, make them think and laugh, and give them the heebie-jeebies. Their guides are knowledgeable licensed master storytellers offering a wide variety of engaging tours. Whether your interest lies in the ghosts of the French Quarter, the mystique of our above ground cemeteries, True Crime, Saints and Sinners (for adults only), our Garden District, or the jazz traditions of the Tremé, French Quarter Phantoms will provide the most entertaining and informative guided tour experience in the city. The popular spine-tingling Ghost & Vampire combo tours begin at 6 p.m. and 8 p.m. every evening. Small groups are guided through dark streets for fascinating and historically accurate tales involving piracy, scandal, slavery, murder, and voodoo woven into ghost and vampire stories. Each tour is personally researched and crafted based on recorded history and folklore, so each tour is unique and never scripted. Trip Advisor rates French Quarter Phantoms as one of the top ten ghost tours in the world. Book a reservation at frenchquarterphantoms.com, call 504-666-8300, or enjoy a Buy One, Get One Free Hurricane at The Voodoo Lounge located at 718 N. Rampart St. to ponder which tour you would prefer or discuss a custom private tour.

Would you like to witness any of the ghosts that inhabit the famous Bourbon Orleans Hotel, formerly a theater, a Quadroon Ballroom, an orphanage and a convent? It ranks as one of New Orleans’ top haunted hotels and was once an historic ballroom and theatre before being converted to a convent in the late 1800s. Chip Coffey, internationally acclaimed psychic, performed a reading there where he detected and communicated with children who experienced sudden deaths, a Confederate soldier, nuns from the Sisters of the Holy Family’s convent, and a ghost dancer under the ballroom chandeliers. The Andrew Jackson Hotel at 919 Royal St., which was at one time the location for a boys’ boarding school. The school was destroyed in the fire of 1794 and five little boys lost their lives. For many years, this hotel with primarily adult guests received many calls to the front desk in the middle of the night to ask them to keep the children quiet. Many claimed they heard boys playing in the courtyard at night.

The waterlogged, swampy soil upon which New Orleans is built makes digging more than a couple of feet impractical. This gruesome revelation was made soon after the first cemetery was established just inside the current French Quarter. Graves popped to the surface and bodies floated down the street when it flooded. The solution was to avoid burial altogether and house the dead in above ground tombs. These little “houses” led to the coining of the term “Cities of the Dead.”

Lafitte's Blacksmith Shop, the oldest working bar in the country and the second oldest building in New Orleans. Built in the 1720s, it is believed to have been used by Jean and Pierre Lafitte as a base for their smuggling operation. Today, this bar is among the most haunted in New Orleans. A French-American pirate and privateer, Jean Lafitte plundered the waters of the Gulf of Mexico and some claim the buccaneer's treasure is buried within the building's bricks. The ghosts of soldiers and pirates have been seen walking around the building at night. Late at night, another familiar apparition is that of a woman with long dark hair dressed in black. We met a couple there who were staying next door in Lafitte’s Guest House in Room 21. They told us about a little girl named Marie who died in the yellow fever epidemic of 1853. That summer, 10,000 people died within the Crescent City due to yellow fever. Whether Marie was one of the victims of yellow fever during that particular year we will never be quite certain, but it is known that she never left. Many believe that her mother was too upset when Marie died to leave the building and that she still occupies her old bedroom. The couple we met reported hearing sounds of weeping and seeing mysterious lights and they wondered if this could be the spirit of Marie playing or someone else? Apparently, Marie’s apparition was seen in the mirror found outside of Room 21 and her ghostly form has been known to talk with children who are guests of the hotel. It is rumored that another young girl slipped and fell down the steep lobby stairwell in the 19th century. Her ghostly apparition has been spotted walking up the staircase, her ethereal blonde hair skimming the back of her white nightgown. We marveled at their stories and looked around hoping to see an otherworldly being. After a couple Voodoo Daiquiris, we decided to move along to another bar in a hotel known for hauntings.

We climbed aboard the rotating Carousel Bar at Hotel Monteleone, the only carousel you have to be 21 to ride. The Monteleone is known for being one of the premier haunted hotels in New Orleans. In March of 2003, the International Society of Paranormal Research spent several days there and discovered more than a dozen earthbound entities. Among them were several former employees including a man named William “Red” Wildemere who died inside the hotel of natural causes. Another spirit is that of a friendly toddler named Maurice Begere. The boy died in the hotel and his distraught parents returned frequently in hopes that he might visit them. Maurice eventually appeared to his mother and comforted her; guests still report seeing him near the room where he died on the thirteenth floor. Cocktail in hand, we decided to investigate. We entered the elevator and discovered that there is no thirteenth floor! Strangely enough, for a period in history, architects were so superstitious that they decided that it was best not to have a thirteenth floor to avoid any bad karma or omens that might be attributed to the number. Some owners did so in the hope that their hotel or business would flourish, while others decided against a thirteenth floor on the chance that their tenants or employees were superstitious and would not want to go there. Otis Elevators even released a survey claiming that approximately 85% of the buildings that contain their elevators do not have a thirteenth floor!

The moment that the fourteenth-floor elevator door closed behind us, the air around us grew cold and the skin on my arms got goosebumps. We made our way down the hallway and the cool air grew much colder and a chill ran down our spines. We saw apparitions of children playing in the middle of the hall wearing clothing of a bygone era. They giggled and then, one by one, each child's apparition stopped to stare at us before vanishing from sight. We high-tailed it straight back to the Carousel Bar and told the bartender about our experience. He smiled knowingly and winked as he stressed that the ghosts of the hotel are very friendly and playful.

The truth is that everyone in New Orleans has a ghost story. Your bartender, waitress, and the person cleaning your hotel room all have ghost stories they will be happy to share. When you visit a bar in the French Quarter, ask your bartender if they think their bar is haunted. I’ll bet they have a story for you! See for yourself! Explore the dark side of the French Quarter … the tombs, secret passageways, courtyards, hotels, and bars. Restless spirits in America’s most haunted city are lurking around every corner. Be careful, they may cast a spell on you!