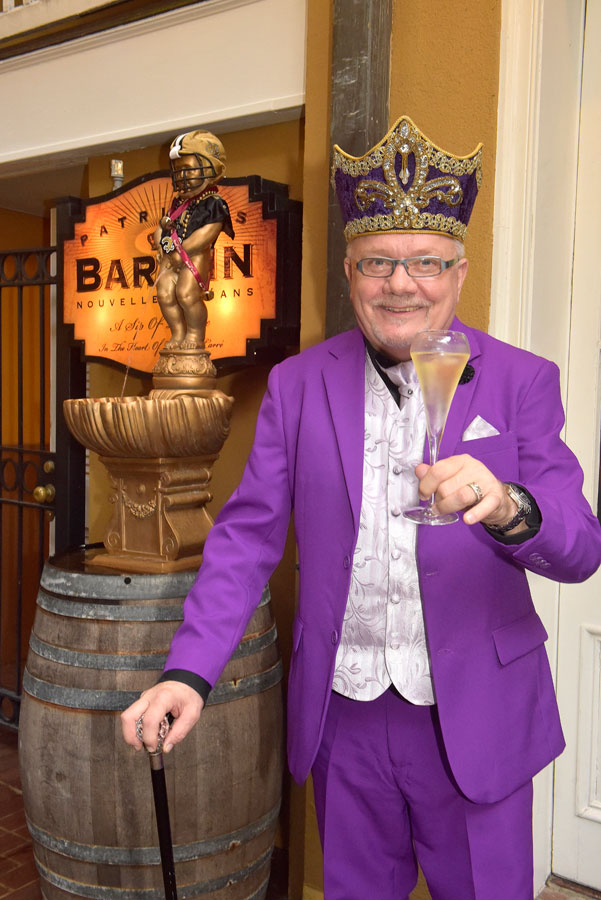 February 4
Krewe of Barkus Parade
This parade has gone to the dogs! Man’s best friend takes center stage in parade. Escorted by their human owners, dogs are dressed up in their festive costumes as they walk down the streets in the French Quarter. It’s a must see! Barkus.org

February 9
Krewe of Bosom Buddies Parade
Dressed in colorful tutus and hats, this fun parade marches through the French Quarter the Friday before Mardi Gras. In addition to its theme-related medallions and other throws, this krewe’s prized throw is a hand-decorated bra! Bosombuddiesnola.org

February 12
Lundi Gras Festival
"Fat Monday," the day before Mardi Gras, offers live music in the afternoon, several parades that evening and a spectacular fireworks display on the river. Hosted by the 800 members of the Zulu Social Aid & Pleasure Club, Rex, the king of Carnival, arrives on the river by boat and meets with the King of Zulu then both are greeted by the Mayor in a spectacular celebration. It now becomes official that Rex rules over New Orleans for the next day. Lundigrasfestival.com

February 13
Mardi Gras/Fat Tuesday
The French Quarter becomes a wild ride packed with costumed revilers for the “greatest free party on earth!” Don’t miss the Annual Bourbon Street Awards, the ultimate costume contest, held at St. Ann and Bourbon starting at noon. Also, check out KOE (originally called Krewe of Elvis) where every member is king! The only true cyber based marching club that takes to the streets on Fat Tuesday, KOE members costume according to each year’s specified theme.

February 14
Steamboat Natchez offers dinner jazz and daytime cruises on the Mississippi River. Its Valentine’s Day cruises are popular, so advance reservations are recommended. This classic southern riverboat sails off the Toulouse St. Wharf (behind JAX Brewery). Steamboat Natchez also features the Steam Calliope, a 32-note steam pipe organ that you can hear being played daily approximately 30 minutes before the daily cruise departure. It’s one of the truly magical, unmistakable sounds of New Orleans.

February 20-25
The Color Purple this
This joyous American classic about a young woman’s journey to love and triumph in the American South has conquered Broadway and is taking the stage at the Saenger Theatre in New Orleans. Saengernola.com for tickets.

February 24
Romeo and Juliette
Shakespeare’s tale of the most famous star-crossed lovers gets an exotic French twist in this stunningly imaginative interpretation by renowned choreographer and director Jean-Christophe Maillot. Mahaliajacksontheatre.com for tickets

March 3-4 and March 10-11
Spring Fiesta & Historic Home Tours
Visitors have an opportunity to explore the interiors of 20 privately owned homes in the French Quarter and Uptown. Experience the grandeur of the past and see what a New Orleans home might have looked like a century or more ago. The festival includes a parade of horse-drawn carriages through the French Quarter and the presentation of the Spring Fiesta Queen and her court at Jackson Square. springfiestanola.com

March 3-4
Congo Square Rhythms Festival
Produced by the New Orleans Jazz and Heritage Foundation, this free festival celebrates the historic role of Congo Square as the birthplace of American music. The festival offers the best of African drumming and dance, together with music from Africa, the Caribbean and the American South, as well as local cuisine, arts and crafts. Jazzandheritage.org/congo-square

March 8 - 10
Bourbon Fest
Food, spirit and culture will converge once again for the Second Annual New Orleans Bourbon Festival. The spirited theme for the sophomore congregation is “Bourbon Generations,” which will feature families from long lines of Master Distillers. Taking place in downtown NOLA at the Contemporary Arts Center (CAC) and Le Meridien hotel, Bourbon Fest promises a plethora of events certain to please the most discerning bourbon enthusiast. Nolabourbonfest.com

March 15
Top Taco New Orleans
A culinary extravaganza where patrons can sample unlimited gourmet tacos and signature cocktails from some of the finest restaurants in New Orleans. Held at Woldenberg Park, the event benefits One Heart NOLA, a nonprofit that serves children in need. Toptaconola.com

March 21-25
Tennessee Williams/New Orleans Literary Festival
This five-day festival is dedicated to the Pulitzer Prize winning American playwright, who spent many years living and writing in the French Quarter. The festival assembles some of the top playwrights, authors, actors, and speakers to sit on literary panels and provide master classes. tennesseewilliams.net

March 31
Crescent City Classic
Organized by The Crescent City Fitness Foundation, the 10k has grown into one country’s premier races with top runners from around the world competing for the title. The race starts at the Mercedes-Benz Superdome and takes participants throughout the city from historic Jackson Square to, past the elegant old homes of Esplanade Avenue, and on to the moss-draped oaks of City Park for a jovial post-race celebration. ccc10k.com

April 1
Chris Owens French Quarter Easter Parade
As the Grand Duchess of New Orleans’ official Easter parade, legendary performer, Chris Owens leads the annual procession filled with family and friends, who will also be dressed in their best attire and of course, fantastic hats. The festive parade meanders throughout the French Quarter with riders tossing beads to onlookers. frenchquartereasterparade.com

April 12-15
French Quarter Festival
More than one dozen stages will rock the French Quarter throughout the three-day festival, which celebrates the history, the people, the food, and the talents of Louisiana and the Gulf south. Music lovers will find traditional and contemporary jazz, Latin, rhythm and blues, Cajun and zydeco, New Orleans funk, classical, swing, rock, international and more on the 20 stages. Locals and visitors dance in the streets and indulge in classic New Orleans cuisine —aptly named “The largest Jazz Brunch in the World” — and cocktails from more than 90 vendors. fqfi.org