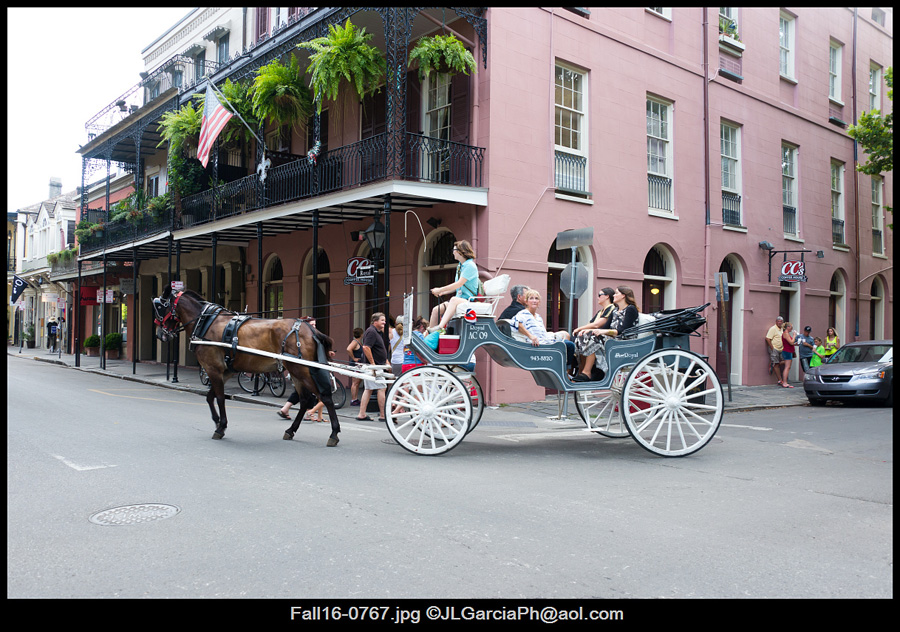 After returning from an Air Force Combat Tour in Vietnam in 1971, Clem’s son, Jim Lauga, took over the business from his father due to an illness. Jim quickly started to incorporate the use of mules, which are known to be smarter, stronger, and more surefooted than horses. Over the next 35 years, Jim, and his wife Carolynn, grew Royal Carriages to have 13 carriages, 50+ mules, 30 drivers, all working out of a small stable just a few blocks from the French Quarter.

A mule is half-horse, half donkey. These hybrids can out-perform both of their parents in almost every field that makes them useful and are extremely well adapted for desert travel. The near immunity to the effects of heat in addition to the ability to survive for far longer without a drink than either parent animal makes a mule the perfect work animal for subtropical climates such as New Orleans’. Each Royal Carriage mule only works 6-9 months out the year, receiving 3-6 months of pasture vacation.

Currently in its 75th year, Royal Carriages, now managed by James Lauga Jr., Jim and Carolynn’s son, has grown to become recognized as the largest commercial carriage operator in North America and continues to set the standard for excellence in the New Orleans Tourism Industry. Trip Advisor awarded Royal Carriages with the “Certificate of Excellence” in 2016 for outstanding customer testimonials.

If you haven’t taken a Royal Carriage tour, what are you waiting for? Royal Carriages is considered the absolute greenest way to explore the sights of the city, and supports local families, farmers, and farriers throughout the South. Local, professional, and licensed tour guides will take you far beyond Bourbon Street while filling your imagination with entertaining historical stories of New Orleans’ past, while seated comfortably aboard a mule-drawn carriage. From the architectural details that capture your interest, to the bag of beignets or bowl of gumbo that will satisfy your hunger, carriage tours offer information that’s not only historical, but also helpful and practical.

“My family and Royal Carriages has been a significant part of New Orleans for the past 75 years. We work our hardest each day preserving the history of New Orleans by telling its story via our authentic mule-drawn carriages” said Royal Carriages third-generation business operator James Lauga Jr. “You would be hard pressed to find a picture or advertisement about New Orleans without a picture of our carriages! We owe this 75th anniversary to all of our mules and strive each day to provide them with the best working conditions in the carriage industry. We would like to thank our millions of customers over the years, in addition to the thousands of locals, for their business and support! All of us at Royal Carriages would like to say thank you New Orleans for being there for us as we continue to be ambassadors for you!”

In the near future, locals and travelers will have the opportunity to book a behind the scenes tour of the Royal Carriages’ stable where one will receive an education on how carriage mules are cared for when living in the city. This is sure to be a hit with families, who will have the opportunity to interact with mules, and learn about proper nutrition, exercise, horse shoes, and the historical significance that the mule has had in not only shaping this city, but also this country.