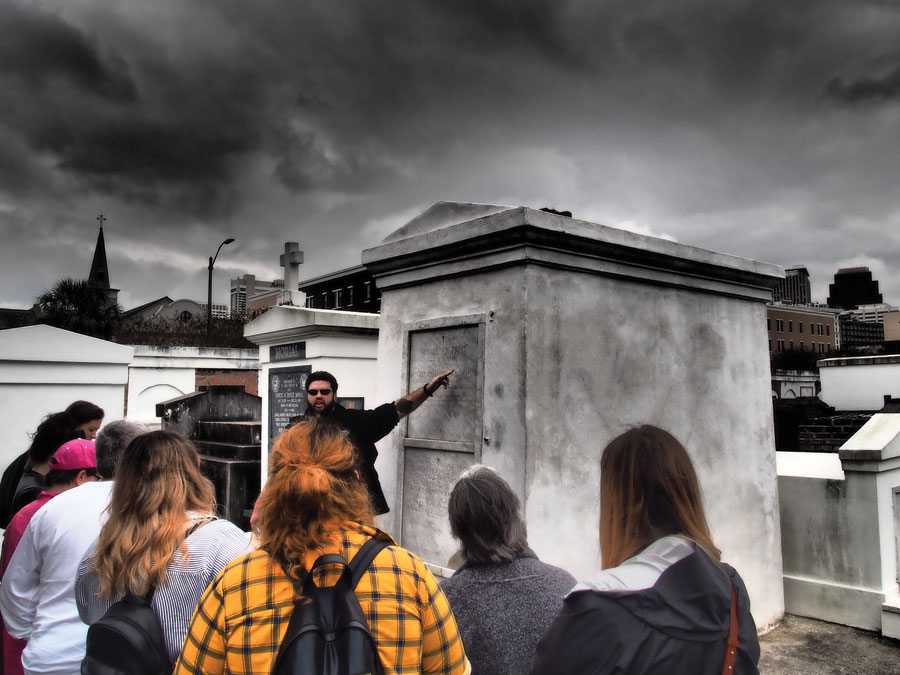 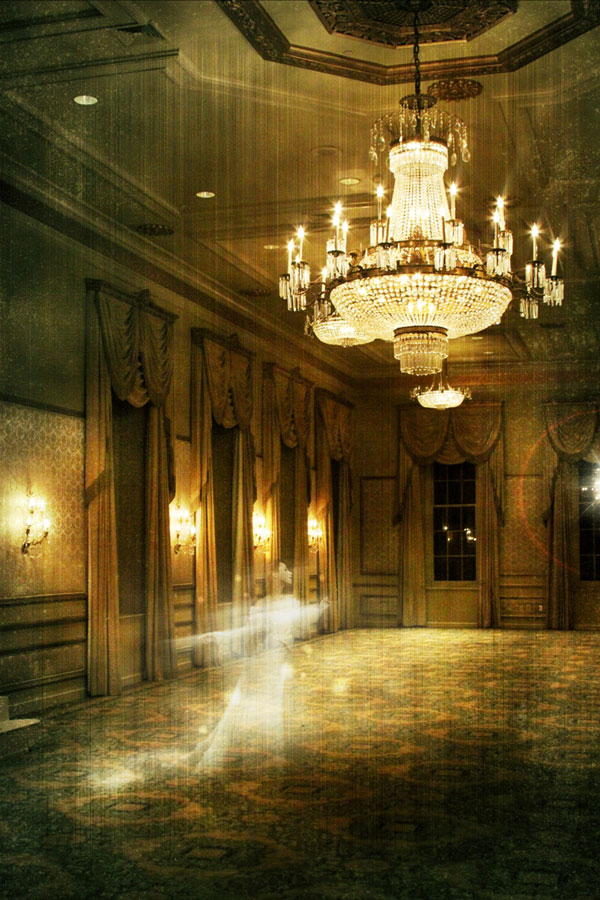 There’s no question that the French Quarter is haunted. It’s interesting, however, to ponder the paranormal state of the port city’s heart and soul: is it a spiritually sacred, or spiritually damaging?

The French Quarter was designed in a military-style grid of 70 squares and founded in 1718 as the first colony in the territory. The ensuing three centuries have born witness to pervasive natural and man-made events that have incessantly manipulated how life is lived in one of the world’s most famous social microcosms. Many of these events, along with the unknown components that concern those of a more scientifically-minded paranormal bent, have amassed a supernatural sphere of existence unrivaled by other haunted locales.

The Vieux Carré’s paranormal nature is ethereal (unearthly and airy) or wicked (sinful and nefarious) depending on the perspective and circumstance. Pestilence presented years death and suffering in the French Quarter until science and modern medicine turned the tables during the early 20th century. With centuries of pestilence attacks in the form of smallpox, yellow fever, and other infectious disease outbreaks, the death toll rose quickly. How many of the tens of thousands of victims died but stayed earthbound in their Vieux Carré homes? How many remained earthbound but left for their afterlife destination, whatever that destination may be? Would these victims have died in anger, knowing they shuffled off their mortal coils far too early? And if so, as portrayed in horror films, would they intentionally wreak havoc on the living? Would these entities have added to the wicked paranormal activities observed in New Orleans?

Disastrous weather has cut many a life short in this city. Hurricanes Betsy, Camille and, of course, Katrina are just a few of the past annual weather threats that became wide-scale, deadly tragedies. Would any of those who had unfortunately died before the natural force majeure seek to torture others, their spirits trapped in their beloved French Quarter?

What about a trial by fire? This medieval practice allowed a jury to determine the extent of innocence or guilt by how cleanly the accused would heal from their wounds, be they burned at the stake or tasked with carrying a burning object. Because French Quarter society was disrupted by the great fires of 1788 and 1794, they can be considered examples of trial by fire. These man-made catastrophes expedited a metamorphosis of architectural design in the Vieux Carré. But does the intense negative energy from widespread fire destruction still invisibly exist in the French Quarter? And if so, does it negatively impact the emotions and actions of present-day visitors and residents?

Of course, death has taken many souls without the need for pestilence, natural disasters, or man-made calamities. Considering that uncontested truth, are spirits eviler if their bodies died by more malicious means? Conversely, do they behave more peacefully if they lived pleasantly, or died in their sleep?

I didn’t consider a single of these questions back in 1995, while I partnered with Larry Montz, a New Orleans-born rebellious field parapsychologist. Against convention, he wanted to take the traditional parapsychological study of Psi abilities out of the lab and into the field. To do this, we created Ghost Expeditions: the first traveling parapsychological workshop crafted uniquely for the public’s participation. Connecting the dots of pop culture without distorted historical re-writes, Ghost Expeditions sparked the formation of thousands of ghost investigations groups in every major metropolitan area, featuring millions of paranormal investigators and countless explorations events around the world, including dozens of NOLA ghost tours.

I wanted to partner with Larry to make him and his work internationally famous. But honestly, I liked participating in this fringe research for the thrills—and my enthusiasm paid off. As a Ghost Expeditions researcher, I had the amazing opportunity to explore these haunted French Quarter properties every day. I clocked in over 3,000 hours before moving to Hollywood. I witnessed interactions between participants and ghosts, quickly logging my own varied paranormal experiences.

Although I authored “ISPR Investigates the Ghosts of New Orleans” (2000) and the 80+ property, city-wide Official Paranormal Guide App (2010), both based on Larry’s documented investigations and research, I’ll share a few of my own French Quarter paranormal experiences, not published elsewhere. This should give you some time to think about your own answers to the questions I posed before I share my own.

During the 2008 remodeling of an Orleans Street property, I was continually visited by a tall (compared to me), thin, African-American spirit with a broad smile. His distinct odor usually alerted me to his presence. I wasn’t afraid of him, but rather unnerved by the intensity of his frequent fascination with me. Months later, I shared a descriptor of the entity and his activities with my landlord Earl Bernhardt, the creator of the French Quarter’s famous Hand Grenade cocktail and then-owner of multiple establishments. Earl listened while raising his eyebrows, then chuckled when he shared that I caught the attention of Fred Staten, known in New Orleans for many years as “Chicken Man.” Chicken Man was a Voodoo Priest famous for biting off the heads of live chickens during Voodoo ceremonies. Earl shared that he had allowed Fred to stay inside the property in question, more than once. What he didn’t tell me was that he had Chicken Man bless more than one of his businesses, and that he had paid for the Chicken Man’s Jazz Funeral and burial after Staten died in 1998. I’d like to note that Earl, a fellow Jimmy Buffet Parrot Head, was honored with his own funerary second line after he passed away in 2019 at age 80.

During a 1996 private afternoon Ghost Expedition for a group of physicians, I was speaking to my party on an upper floor of the New Orleans Pharmacy Museum building, sharing Larry’s information about French-born pharmacist Dr. Dupas, who died in 1867 of syphilis complications after a decade of experimenting on female slaves. Speaking to the group, I could feel the negative ghost in the room. When I mentioned his disturbing presence, he rushed at me. According to the group, I lost all color in my face and passed out in the arms of a doctor, who moved quickly enough to catch me before I hit the floor.

Larry Montz had the trust of the Bourbon Orleans Hotel when the General Manager brought the parapsychologist in for a professional investigation, years before it was cool for a building to be known as haunted. Larry then convinced the manager to go public with his findings, guaranteeing the hotel would net vast profits with a haunted reputation. Larry was correct then, as he is now. After my 1997 move to L.A., I placed winners in a haunted NOLA B&B, choosing to stay at the Bourbon Orleans while fulfilling the week-long Ghost Expeditions Secret Square Prize I had created for Hollywood Squares. Each night, I was awakened multiple times as unseen hands loudly disturbed my personal belongings. They would stop when I yelled at them, “Please stop!” but only temporarily. Did I keep the lights on all night? Of course not! I used the TV.

Now to address the questions posed. Truthfully, the answers to each would depend upon your intuitive feelings and scholarly or religious teachings of each individual. I have never felt sufficiently motivated to thrust my own opinions upon anyone else. But I will say this: the Vieux Carré has intriguingly concentrated paranormal activities because of more than three centuries of intense living and death in an extremely dense area. In addition, this has created layers of energy that doesn’t necessitate being a psychic to feel the weight and sensation shifts of the French Quarter—both from earthbound entities and residual energies.

Answers these questions yourself by seeking out and exploring the Other Side of the French Quarter with your own eyes. Amis, laissez les bons moments rouler avec les fantômes du quartier français!