Ghostly Gallivants and Voodoo in the Vieux Carre 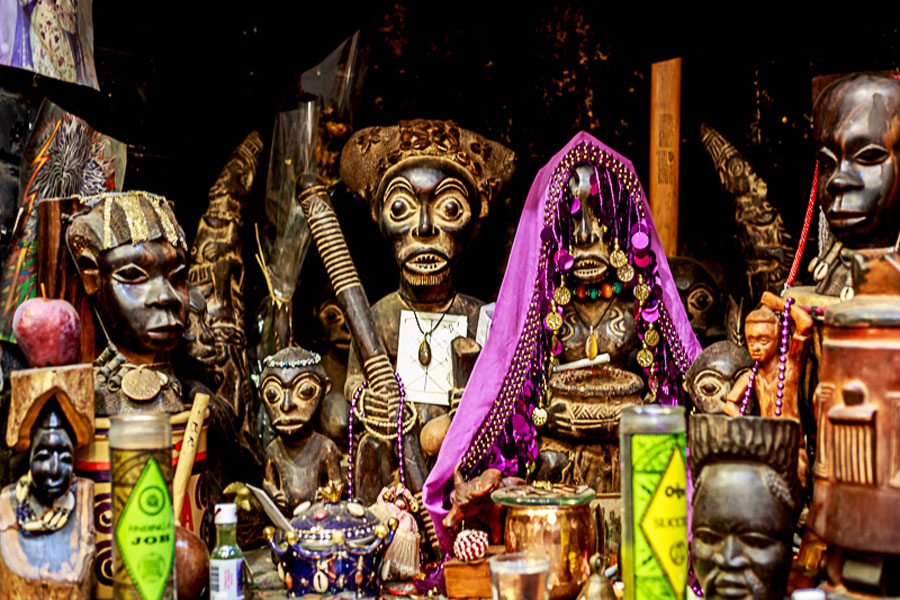 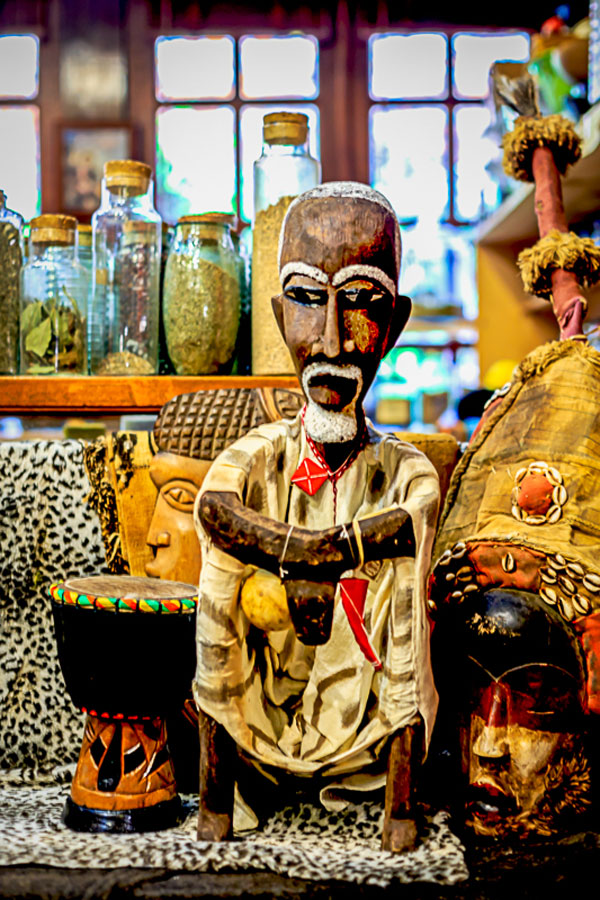 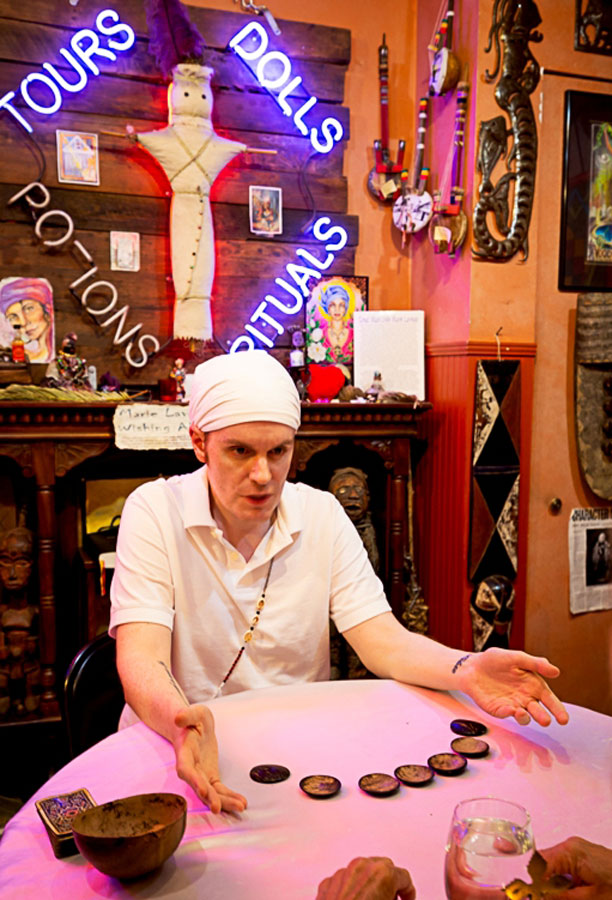 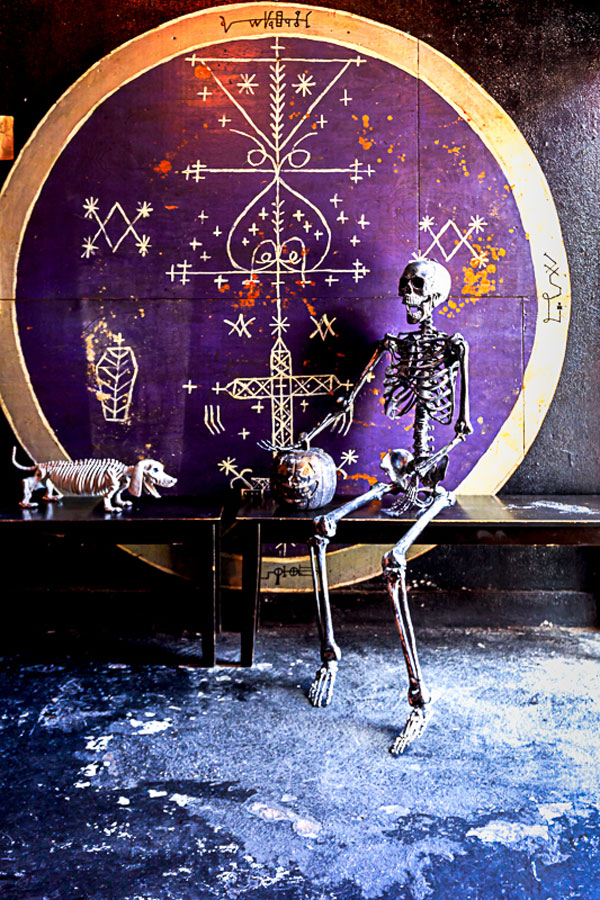 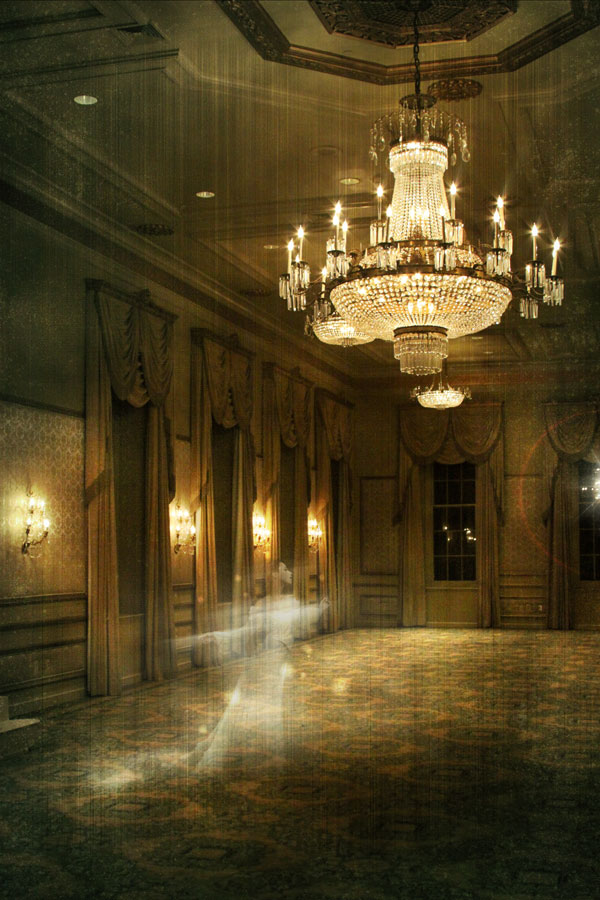 Strolling down Toulouse Street one warm summer night, I caught a hazy glimpse of an old woman appear out of nowhere. She was dressed in black with beads in her hand as she stepped into a doorway. Curious, I went to see where she went. As I approached the doorway, I felt a coolness and noted a strange aroma. Old yellowed mail was stuck in the door making it obvious that the place had not been visited recently. Goosebumps covered my arms, and I went home to research the area. Nearby is The Olivier House, a charming little hotel built in 1836 by Madame Olivier, a wealthy plantation owner. It was later owned by the vicious and hateful Elizabeth Locoul who branded her servants.. She always wore black and was never seen without her rosary. She wandered around mumbling prayers to herself and would scream and curse at anyone who interrupted her. Guests claim they see the ghost of a mysterious old woman dressed in black carrying a rosary as she roams around the property cursing at staff and visitors. Elizabeth is often seen in the room where she died in 1884 at the age of 88. Is it possible that I saw Elizabeth? In the land of voodoo, vampires, and witchcraft, it’s no wonder that America’s most haunted city is rife with tales of restless spirits. Native Americans warned French settlers not to build a city on this “cursed land.” Founded in 1718, New Orleans has three centuries of French, Spanish, African, Native American, and Acadian history filled with violent deaths. Legends of grisly murders, plundering pirates, voodoo spirits and restless wanderers run rampant across the city. Some of the original residents and visitors of historic New Orleans never left town!

While staying in the French Quarter, you may even be lucky enough to see an apparition. The hauntings at the Dauphine Orleans Hotel include Civil War soldiers and “ladies of the evening.” In the late 1890’s and early 1900’s, May Baily’s was a popular bordello in the wildly infamous and legal red-light district known as Storyville. May Baily’s Place within the hotel is a great place to see spirits, including a Creole soldier in military uniform and a whimsical “working girl” named Jewel who flutters as she dances across the courtyard.

Set against a refined backdrop of wood paneling, live jazz and ice-cold martinis, Bombay Club offers more than one type of local spirit: you can imbibe in a “Sophie,” a vodka and champagne based cocktail named after the resident ghost of a Storyville Madame. Bombay Club patrons and employees report seeing her curvy figure in the club, where she fits in just fine among the sultry chanteuses and local minxes, enjoying the high (after) life.

There is much mystery and folklore surrounding the origins and practice of Voodoo in New Orleans. Many French Quarter shops are dedicated to the magic and ritual of Voodoo, and they will not only satisfy your curiosity, they may also put a spell on you!

Want to learn more about the origin of voodoo? Voodoo Authentica of New Orleans Cultural Center and Collection, located at quiet and picturesque 612 rue Dumaine, has been open to the public since 1996 and is owned and operated by a New Orleans family. Voodoo Priestess Brandi C. Kelley and other initiated priests and priestesses are available daily. It features the original work of their team of local spiritualists and folk artists, including an exclusive line of locally-handmade Voodoo dolls, gris gris bags, potion oils, candles, and ritual kits. They carry a great selection of practitioner-written books and unique New Orleans, Haitian, and African spiritual arts and crafts. Voodoo Authentica offers rituals, readings, spiritual work and consultations, all conducted by their friendly, welcoming and knowledgeable team of Voodoo practitioners. There are working altars throughout where locals and people from all over the world make requests from spirits and leave offerings.

Voodoo Authentica’s free annual VOODOOFEST is held every Halloween, October 31st, from 1pm to 7pm. In 2018, the festival will celebrate its 20th year of sharing Voodoo’s many invaluable contributions to our city's unique historic and present culture. Through entertaining musical presentations and educational lectures by local favorites, organizers endeavor to shed light on this widely misunderstood religion. Bring your drum, rattle or clapping hands, and don’t miss the festival’s closing Ancestral Healing Ritual at 7pm!

For an interesting yet eerie jaunt to learn about the character and traditions of the historic French Quarter, French Quarter Phantoms strives to show visitors the city, make them laugh, and give them the heebie-jeebies. Their guides are “the strangest bunch of real historians” who are knowledgeable licensed master storytellers offering Cemetery, Treme, True Crime, Saints and Sinners (for adults only) and the popular Ghost & Vampire combo tours beginning at 6pm and 8pm every day. Each tour is personally crafted based on recorded history and folklore, so each tour is unique and never scripted. French Quarter Phantoms is rated with Trip Advisor as one of the top ten ghost tours in the world. Haunted by phantoms and the hovering mysteries of past tragedies, the French Quarter is a place where the spirits often find the coffin too confining; mysteries and history combine to make this a very unique city. Groups are guided through dark streets for a historically accurate, fun-filled tour full of ghost and vampire stories. Book a reservation at frenchquarterphantoms.com, call 504-666-8300, or come to The Voodoo Lounge located at 718 N. Rampart Street at the corner of Orleans Street where the tours begin at 6 and 8pm.

I have always wanted to be a ghost hunter and to investigate paranormal activities, so I joined French Quarter Phantoms on their new tour of St Vincent's Infant Asylum, using instruments including Spirit Boxes, K2 meters, dowsing rods, EMF meters, and a REM pod which detected spirits. I was able to play with a spirit using a ping pong ball!

The yellow fever epidemic’s death toll was staggering. Children were left behind as orphans with no one to tend to them. In 1861, the Asylum was constructed and the Daughters of Charity offered shelter and education to the children. The orphanage operated for many years to come, accommodating single mothers and their children through the 1960’s. The orphanage shut down in the mid-1970's and sat abandoned until 1994, when the building was purchased and remodeled into the present-day St. Vincent's Guest House. The guest house is said to be haunted by many of the children who died there of yellow fever. Guests and staff have seen the apparitions of nuns and children and heard them run through the halls, giggling and playing. Some guests reported waking up to the incredible sight of playful spirits sitting on their beds or tugging on the sheets. The apparition of a nun also has been seen.

Would you like to witness any of the ghosts that inhabit the famous Bourbon Orleans Hotel, formerly a theater, a Quadroon Ballroom, an orphanage and a convent? It ranks as one of New Orleans’ top haunted hotels and was once the Orleans Ballroom and Theatre before being converted to a convent in the late 1800’s. Chip Coffey, internationally acclaimed psychic, performed a reading there during which he detected and communicated with children who experienced sudden deaths, a Confederate soldier, nuns from the Sisters of the Holy Family’s convent, and a ghost dancer under the ballroom chandeliers.

Gray Line Ghosts and Spirits Tour will take you to the Bourbon Orleans as well as our courthouse where the state Supreme Court is based, the site of a former slave exchange. Take an exciting look at the relics of voodoo ceremonies, a vampire slaying kit, and age-old tools of the trade used by mysterious inhabitants of our city. They may tell you about The Andrew Jackson Hotel at 919 Royal Street, which was at one time the location for a boys’ boarding school. The school was destroyed in the fire of 1794 and five little boys lost their lives. For many years this hotel, with primarily adult guests, received many calls to the front desk in the middle of the night asking them toquiet the little boys playing in the courtyard.

The waterlogged, swampy soil upon which New Orleans is built makes digging more than a couple of feet impractical. This gruesome revelation was made soon after the first cemetery was established just inside the current French Quarter. Graves popped to the surface and bodies floated down the street when it flooded. The solution was to avoid burial altogether and house the dead in above ground tombs. These little houses led to the coining of the term “Cities of the Dead.” On the Cemetery and Voodoo Tour, you will enter the cemetery gates and see rusty decorative ironwork and tombs with crosses and statues jutting from them. Learn about voodoo and our unique burial customs. You never know who will want to pose for a picture! Reservations recommended at the Gray Line Lighthouse Ticket Office at Toulouse Street and the Mississippi River. www.graylineneworleans.com. 504-569-1401.

For a sip of pleasure in a beautiful private courtyard in the heart of the French Quarter, Patrick’s Bar Vin is always a wonderfully warm and relaxed gathering place for locals and wine enthusiasts from around the world. Ranked in the top ten nationally by Gayot and Fox News, this bar turns strangers into friends and friends into family. Our own bon vivant, Patrick Van Hoorebeek, the quintessential host and legendary manager, welcomes all to a Halloween party on Wednesday, October 31st from 7pm until 10pm. The party will feature a costume contest, DJ music, and a glass of wine for every costume contestant. 730 Bienville Street, (504) 200-3180.

Drink with the ghosts of pirates and soldiers at Lafitte's Blacksmith Shop located at 941 Bourbon Street. It is the oldest working bar in the country and the second oldest building in New Orleans. Built in the 1720s, it is believed to have been used by Jean and Pierre Lafitte as a New Orleans base for their smuggling operation. Today, this bar is one of the most haunted in New Orleans. A French-American pirate and privateer, Jean Lafitte plundered the waters of the Gulf of Mexico. Some stories claim the buccaneer's treasure is buried within the building's bricks. The ghosts of soldiers and pirates have been seen walking around the building at night. Late at night, a familiar apparition is that of a woman with long dark hair dressed in black.

Explore the dark side of the French Quarter… the tombs, secret passageways, courtyards, hotels, and bars. Restless spirits in America’s most haunted city are lurking around every corner… It may cast a spell on you!