Evoking the Spirits of the Vieux Carre 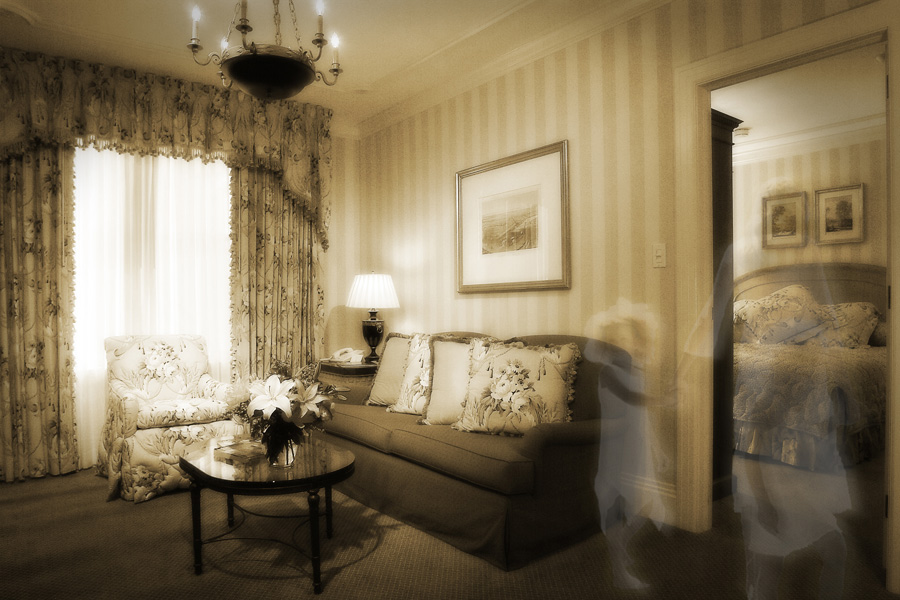 In the land of voodoo, vampires, and witchcraft, it's no wonder that America's most haunted city is rife with tales of restless spirits. Our turbulent history is cloaked in a shroud of supernatural intrigue and mystery that makes it a ghost hunter's dream come true!

The "Real Men in Black," formally known as Veritas Research Group, recently visited the French Quarter to investigate paranormal activity at the Hotel Monteleone and The Bombay Club. The team was initially formed in 1986 with the goal of debunking claims of supernatural occurrences, but now seeks to analyze credible audio and video evidence of reported events in order to understand their true cause. This anonymous group of professionals includes a dentist, a nurse, an attorney, a retired CIA operative, a police detective, a veterinary surgical technician, and a retired army senior officer. They operate under the radar with no web site or advertisements, utilizing their innovative approaches for selected individuals, businesses, and religious organizations.

Many people who come to the magnificent 19th century Hotel Monteleone don't want to leave"... and some never do! It has a history of ghosts and hauntings, particularly on the 14th floor, which is actually the 13th floor above ground level but it has been renumbered. There, a young boy is often sighted running in the hall and playing in the guest rooms along with a young woman who floats along the hallway. Legend has it that the young boy was the son of Josephine and Jacques Begere who stayed at the Hotel Monteleone when they came to attend an opera in the famous French Opera House on Bourbon Street in the late 19th century. Maurice, their young son, was not feeling well and was likely suffering from yellow fever. He stayed with his nanny while the couple went off to the opera. Unfortunately, while returning to the hotel, the horses bolted when they were startled by a loud noise and Jacques was thrown from the buggy, killing him instantly. Maurice passed away shortly after his father's death and they say that Josephine died within a year of a broken heart. Some speculate that the ghost of young Maurice forlornly roams the halls searching for his parents. His presence is especially felt on the fourteenth floor near room 1462 where his parents were staying.

Using specialized equipment they designed, the Veritas Research Group set up their instruments to take readings and relay real time audio and video evidence remotely for other team members to evaluate. After the evidence from the night was carefully analyzed, the team discerned the sounds of unexplained movements including the "clink" of china and glasses one may hear at a dinner party and voices. One recording was a voice of a woman saying, "Jerry did it." The infrared photographs and videos revealed a young boy sticking his head out from behind the bed, the curtains rustling, a woman in a long dress sitting on the bed, and a "green mist" with the face and body of a young girl.

Next, the team investigated the Bombay Club where the ghost of a Storyville madam is often sighted, particularly when women in stressful situations seem to need protection. Glasses have flown across the bar, a transparent figure has been seen hovering over booths, and some women have felt a hand on their shoulder. Analysis of audio and video evidence revealed distorted figures and heads, particularly around booth six. Interestingly, the restrooms seemed active that evening with the water being turned on in the sink while the investigator used the facility alone and the electronic voice phenomenon sessions identified several responses to questions from two distinct voices, one of which identified herself as "Rosemarie." Do you have unexplained occurrences in your home or business that you would like investigated? Contact Veritas Research Group at P.O. Box 4041, Hammond, LA 70404 or veritasrg@bellsouth.net .

Would you like to witness any of the ghosts that inhabit the famous Bourbon Orleans Hotel, formerly a theater, a Quadroon Ballroom, an orphanage and a convent? Take a Gray Line Ghosts and Spirits Tour to visit well known haunted sites as well as those that are often overlooked such as our courthouse and a former slave exchange. Your guide may showcase relics of voodoo ceremonies, a vampire slaying kit, and age-old tools of the trade used by mystical and mysterious inhabitants of our city. Bring your camera; you never know who will want to pose for a picture! Tours depart the JAX Brewery nightly at 7:30pm from the ground floor Information desk. 504-569-1401

Haunted History Tours is New Orleans' oldest and largest walking tour company, offering your choice of ghost, voodoo, or vampire tours that are mildly theatrical, hugely historical, thoroughly entertaining and will leave you spellbound. Their Ghost Tour explores the grim and ghastly deeds of the old French Quarter and pauses for a drink at a haunted bar. Escape into the secret and sinister past as their offbeat tour guides provide you with an eerie, chilling yet fun-filled adventure! This tour is recommended as a "must do, #1 tour" for visitors to the French Quarter by the Travel Channel! Ghost tours depart from Rev. Zombie's Voodoo Shop, 723 St. Peter Street, at 6pm and 8pm nightly. 504-861-2727

The friendly spirits of the old French Quarter are waiting to meet you!