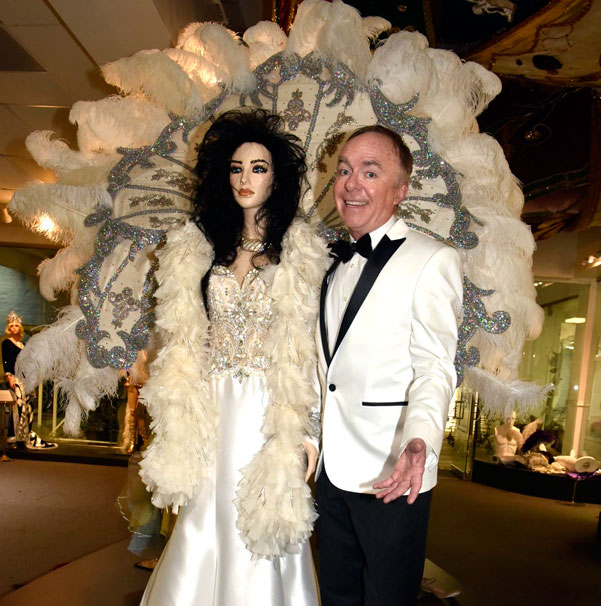 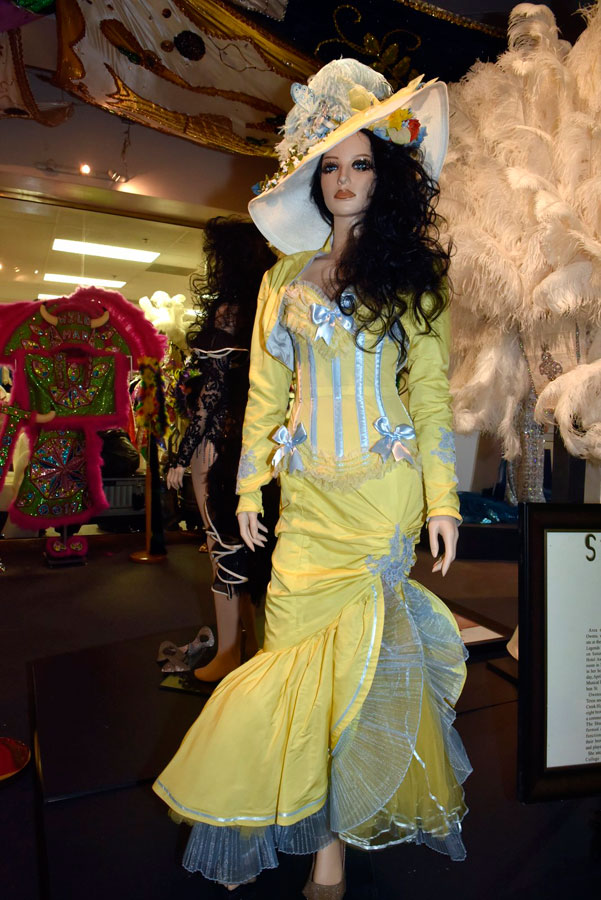 In a French Quarter version of a “rags to riches” story, Carl Mack, a Rochester, New York native first appeared in 1984 in his trademark red and white striped suit and straw hat playing his wheeled xylophone for tips in Jackson Square. Meanwhile, he was astutely observing the local culture thinking of ways he could carve out his niche in it. He expanded his repertoire of entertainment skills to juggling, face painting, balloon twisting, pantomiming, and basic magic tricks. People who saw him perform started hiring him to entertain at parties and his repertoire began to expand to booking other entertainers including stilt-walkers, little people, sword swallowers, fire-eaters, and walkers sporting oversized papier-mâché heads. These expanded offerings required costumes that needed to be made and ultimately stored. Thus began Carl’s accumulation of costumes and other festive apparel and accoutrements.

Carl Mack, the owner of the largest privately owned collection of costumes in New Orleans, founded The Mardi Gras Museum of Costumes and Culture. Visitors can learn about the history of Mardi Gras and view breathtaking displays of some of the most colorful and imaginative garments ever crafted by human hands. His namesake company, Carl Mack Presents, hosts or produces hundreds of parties and events every year, especially during the Carnival season in addition to outfitting countless numbers of revelers from a vast and diverse costume collection.

“My goal is to have people leave the museum with much more of an understanding that Mardi Gras isn’t just a million people out on Bourbon Street,” Carl explained. “There is a Carnival season that permeates all layers of the community. Different neighborhoods and cultures have their own way of celebrating Carnival. There’s not just one way to do it and one of the most fun things about exhibiting is telling the story and showing the deep textures of this variety.”

A new exhibit at the museum features the costumes of Chris Owens, the Queen of Bourbon Street. Her kingdom is her club at the corner of St. Louis and Bourbon Street. She is a legendary French Quarter icon, a whirling dervish of sequins, song, and dance in the style of old-world burlesque backed by a top-notch band of musicians a

nd singers. The Texas native first visited New Orleans in the early 1950s and fell in love with the city. "That was my first look at New Orleans, the most exciting place I'd ever seen in my life," Owens said. "I came back in the late 50s and met my husband. My whole world changed after that," she said. Automobile dealer Sol Owens showed the girl who grew up on a farm near Abilene a life she'd never seen. They traveled the world. "We went to Cuba. That's where I learned to dance. I danced on the stage in Havana. The music was so Latin and alive. I just loved it. My husband was a great Latin dancer," she said smiling. They danced nightly at the Roosevelt Hotel Blue Room and Fountain Lounge. Their dancing led them to perform in Acapulco, Rio, Madrid, Spain, and Argentina.

Owens has been a fixture on Bourbon Street since the 1960s. Sporting a mane of long black hair that puts Cher to shame, Owens kibitzes with the audience and shimmies and shakes and parades like it’s Mardi Gras morning. This is the kind of entertainment that used to be the norm on Bourbon Street back when women wouldn’t leave home without white gloves. Eternally glamorous, she continues to deliver an elegant dose of Las Vegas to Bourbon Street with her Latin Rhythms band beginning at 8:30pm Monday through Saturday, taking the stage at 10pm.

If you visit the New Orleans Musical Legends Park on Bourbon Street, you’ll find a statue of the curvaceous Miss Owens alongside the likes of Al Hirt, Pete Fountain, and Fats Domino.

Chris Owens’ costumes and much more can be viewed at The Mardi Gras Museum of Costumes and Cultures located at 1010 Conti Street; it is open from 10am to 5pm, Monday through Saturday.