All About the Party! 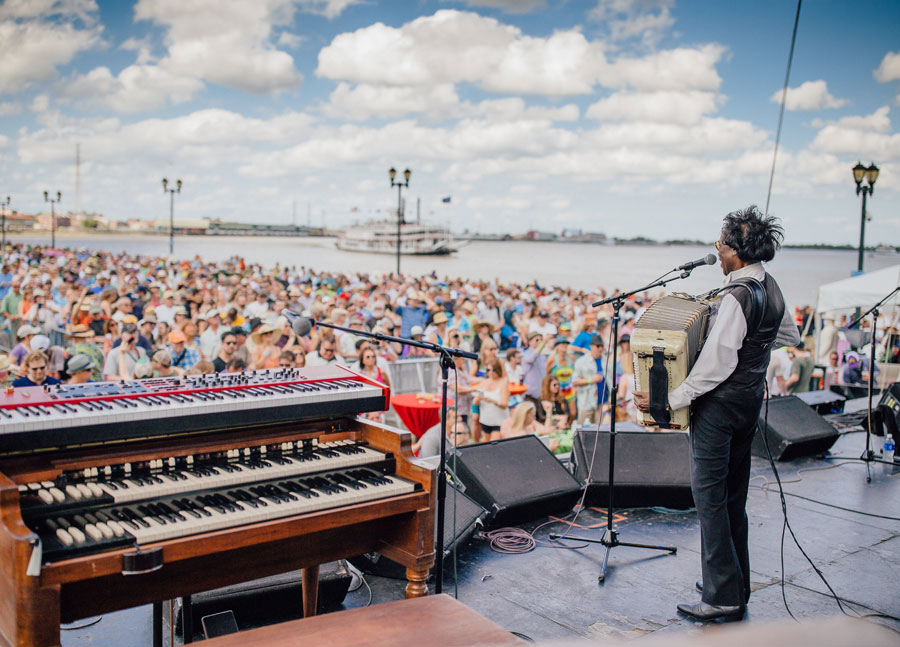 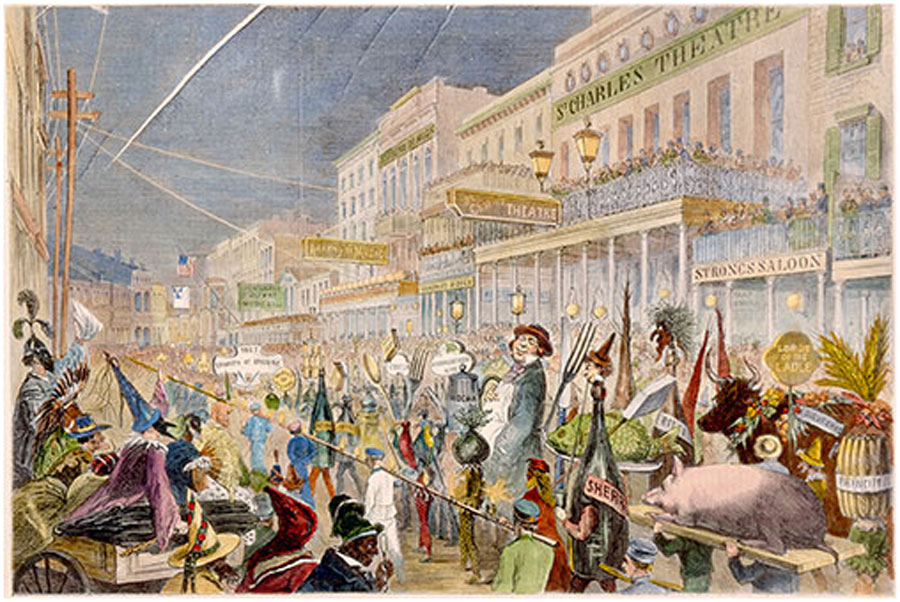 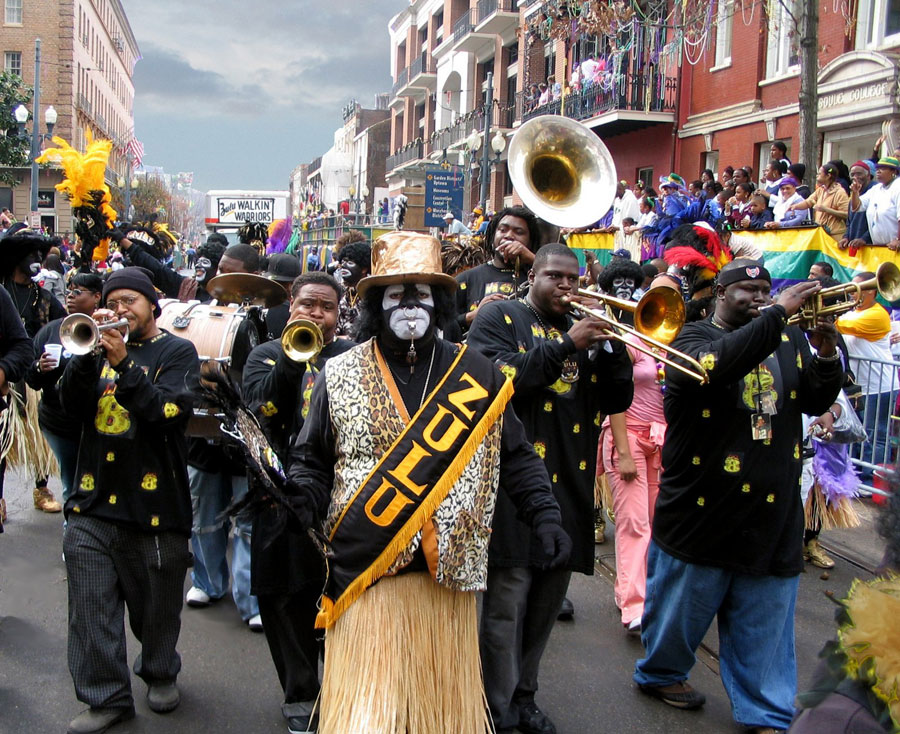 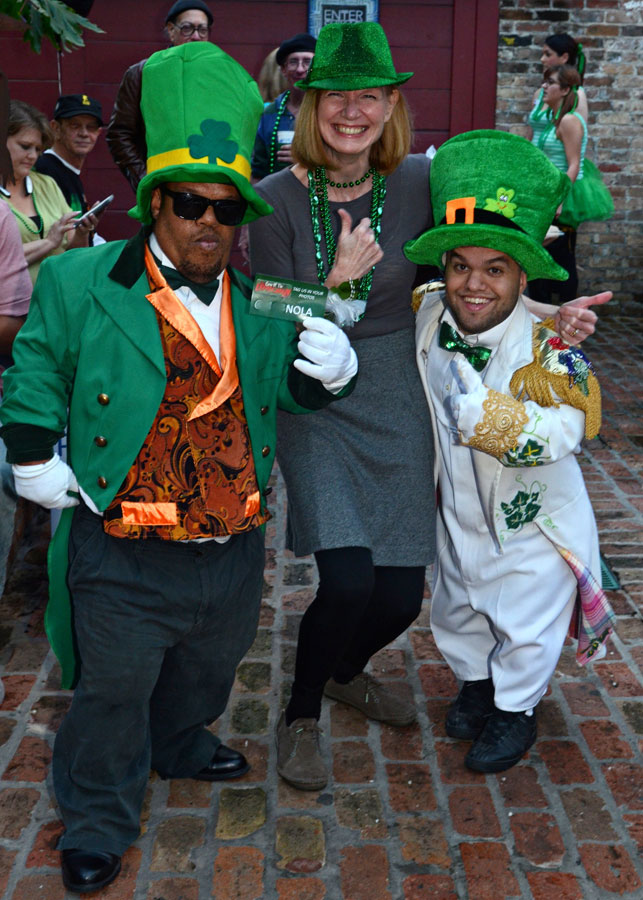 Here in the Big Easy, one thing is for sure. We know how to “pass a good time,” let the good times roll, and we know how to throw a good party that people from far and wide come to attend. Mardi Gras and the French Quarter Festival, the largest free music festival in the South, are two shining examples of hospitality in our fair city where “hostess with the mostest” has a whole new ring.

It took the city of New Orleans to transform the centuries-old celebration of Mardi Gras into America's greatest party. Mardi Gras dates back thousands of years to pagan celebrations of spring and fertility. A possible ancestor of the celebration was the Lupercalia, a circus-like orgy held in mid-February in Rome. When Christianity arrived, religious leaders incorporated these celebrations into the new faith. Consequently, the debauchery of Mardi Gras became a prelude to Lent, the forty days between Ash Wednesday and Easter Sunday. Merrymakers would binge on the excesses of meat, eggs, milk, and cheese in preparation for several weeks of fasting and fish on Fridays. The word “carnival” is a Latin word derived from the concept of removing meat from one’s diet.

Many historians believe that the first American Mardi Gras took place on March 3, 1699, when the French explorers Iberville and Bienville landed just south of New Orleans. Knowing that March 3 was being celebrated as a major holiday in France, they christened the site Point du Mardi Gras and held a small celebration.

In the 18th century, as the French further colonized North America and New Orleans evolved into a bustling port city with strong Catholic roots, Mardi Gras celebrations of Fat Tuesday, which marks the last opportunity for feasting and revelry before a period of Lenten fasting begins on Ash Wednesday, spread throughout the region. In New Orleans, elaborate galas were held where attendees wore masks that allowed them to shed strict societal expectations. Under French rule masked balls flourished, and they began marking the holiday with lavish dinners and street parties.

When the Spanish took control, they abolished these rowdy rituals. The prohibition continued when New Orleans became an American city in 1803, but finally ended when Louisiana became a state in 1812. By 1823, the Creole populace prevailed upon the American governor and Mardi Gras balls were again permitted; four years later street masking was legalized. On Mardi Gras in 1827, a group of students donned colorful costumes and danced through the streets of the French Quarter mocking the revelry they saw while visiting Paris. Ten years later, the first recorded Mardi Gras parade rolled. In the early 19th Century, the public celebration of Mardi Gras consisted mainly of maskers on foot, in carriages, and on horseback. In 1837, a costumed group of revelers walked in the first documented "parade," but the violent behavior of maskers during the next two decades caused the press to call for an end to Mardi Gras. Fortunately, six New Orleanians who were former members of the Cowbellians, a group that had presented New Year's Eve parades in Mobile since 1831, saved the New Orleans Carnival by forming the secret Mistick Krewe of Comus organization in 1857. These New Orleans businessmen organized a torch-lit Mardi Gras procession with masked men, marching bands, and rolling floats throwing trinkets to set the tone for the future. They proved that Mardi Gras parades could be enjoyed in a safe and festive manner and they beautified the event by choosing a mythological namesake, presenting a themed parade with floats and costumed maskers, and staging a tableau ball.

Rex, one of the oldest Mardi Gras krewes still parading, began in 1872 and established purple, green, and gold as the iconic Mardi Gras colors. Rex still assembles floats using techniques that have spanned generations, entirely by hand. Contrary to popular belief, Rex floats are not built over Civil War-era cotton wagons; instead, they are built on wagons formerly employed by the City of New Orleans to collect refuse in the late 19th century.

“Rex is like a six-mile family picnic.” Arthur Hardy, local Mardi Gras enthusiast, explained. “Anybody can go, and it’s a remarkably safe and wholesome event. You don’t watch a Mardi Gras parade, you’re a part of it,” he said. “There are very few entertainment venues where they give you a free show and free gifts to take home with you,” referencing popular customs like bead-throwing that make Mardi Gras parades a participatory event.

Today, there are about 35 major parades throughout New Orleans, yet only small walking krewes go through the French Quarter since floats are prohibited from rolling down the area’s narrow streets due to fear of fire. Almost all parades climax with a route ending on, or nearby Canal Street. Be sure to catch at least one of the "Super Krewe" parades on Canal Street such as Bacchus, Endymion, and Orpheus that employ cutting edge technology such as fiber-optic lighting to create amazingly beautiful floats large enough to carry hundreds of riders.

One of the most delightful walking krewes in the French Quarter is the Krewe of Cork parade on Friday, February 2nd beginning on Royal Street between St. Peter and Toulouse Streets at 3pm. “We celebrate Wine! Food! Fun!” says King Patrick van Hoorebeek. Founded in 2000, the Krewe of Cork has grown into a world famous Mardi Gras and wine industry phenomenon. The Mardi Gras celebration for the over 400 member strong krewe involves parading through the French Quarter donning wine and grape related costumes. There will be wine, of course, and lunch, and wine, and a brass band, and more wine. Enjoy some wine at a Top Ten rated wine bar and talk with King Patrick van Hoorebeek any time at Patrick’s Bar Vin at 730 Bienville Street.

For dog lovers, it’s hard to beat the Krewe of Barkus which parades on Sunday, February 4th. The Parade Pawty starts early at Armstrong Park on N. Rampart Street at St. Ann. Walk around and enjoy the costume promenade, and introduction of canine King Barkus and his Queen and Royal Court! The parade proceeds through the French Quarter at 2pm throwing dog treats and toys.

Royal Sonesta's 47th annual “Greasing of the Poles” is a spectacle that takes place Friday, February 9th at 10 a.m. sharp! A celebrity Judges Panel rates greasing competitors with trophies for the winners. Competitors grease the poles to deter over-zealous Mardi Gras revelers from shimmying up to the coveted balconies and they compete to the tunes of a live jazz ensemble. Shortly after the poles are greased, the Bosom Buddies march from the corner of Bourbon and St. Louis at 11:30am. Try to snag one of their prized throws, a hand-decorated bra! Dressed in tutus, bras, and hats, their theme is “Crescent Titty” to honor our tricentennial! Finally, at 1pm the DIVAS, or Divine Protectors of Endangered Pleasures will be on the balcony of Arnaud’s Restaurant in their elaborately beaded bustiers. At 1:15pm, they promenade with their jazz band up Bourbon to Pat O’Brien’s and back down Royal Street to Arnaud’s again.

On Saturday, February 10th at 2pm at Antoine’s Restaurant, the Krewe of Lafcadio composed of leaders in the culinary arts parade through the Quarter bestowing wooden cooking spoons. They feature a mule-drawn mini-float with a top local chef as royalty and brass band accompaniment.

Finally, Fat Tuesday arrives on February 13th and you should be ready for fun-filled day of Bacchanalian revelry at the “Greatest Show on Earth.” The biggest free party thrown in North America always falls 46 days before Easter and is the city's most popular attraction. Visitors and locals alike love the party atmosphere, the crowds, costumed revelers, and the camaraderie. Don a costume to become a part of the party rather than just a spectator! One of the first marching krewes you will see coming down Canal Street and rolling into the French Quarter around 9 a.m. will be Pete Fountain’s Half-Fast Marching Club founded in 1961. After a brief interlude on Canal Street, the Club enters the French Quarter at Bourbon Street and wanders through the French Quarter eventually ending at the Riverfront Hilton in the early afternoon.

Following Pete Fountain’s Half Fast Marching Club, Mondo Kayo Social and Marching Club triumphantly dances down Canal Street with the color and joy of Caribbean Carnival, then continue on to Jackson Square. Finally, they wind their way over to Chartres at Frenchmen Street where they dance and play until dark.

The Bourbon Street Costume Contest on Bourbon at St. Ann at noon is an adult spectacle not for the faint of heart! It starts at noon in all of its feathered and leathered glory. Just when you catch your breath from all the street parties and parades, it’s festival season! Celebrating their 35th year, French Quarter Festival, April 6th through 9th is the largest free music festival in the United States. It all started back when the French Quarter was in the process of getting ready for guests coming to the World’s Fair. The streets had been repaired and it took quite a while and made quite a mess causing locals to avoid the Vieux Carre. The first French Quarter Fest took place on April 6-8, 1984, a celebration following $7.2 million worth of repairs to its historic streets. The Times-Picayune reported, "To the sound of jazz and jackhammers on Bourbon Street, Mayor ‘Dutch’ Morial announced that a French Quarter Festival will be held to celebrate the completion of massive street and sidewalk work. The three-day event was designed to lure back to the Vieux Carre those who have stayed away while sidewalks and streets have been replaced,” Morial said. This small event has since grown into a self-sustaining major event. Similar to Mardi Gras, it showcases Louisiana culture which locals embrace, and it offers something for everyone. Twenty-one stages throughout the French Quarter celebrate local music from traditional and contemporary jazz to R&B, New Orleans funk, brass, folk, gospel, Latin, Zydeco, classical, cabaret, and international music as well as a music stage for children. Our best restaurants create “The World’s Largest Jazz Brunch.” This signature event features authentic local cuisine from over one hundred renowned area restaurants. French Quarter Festival has been consistently voted “favorite festival” by locals.

We love our street parades, block parties, and festivals here in the French Quarter! We live to celebrate life and our cultural heritage. Join us and “Laissez les bon temps rouler!” a Cajun expression meaning "Let the good times roll!" It strongly conveys our "joie de vivre," or "joy of living" attitude that pervades all who come to revel in the magical festivities in the Vieux Carre!