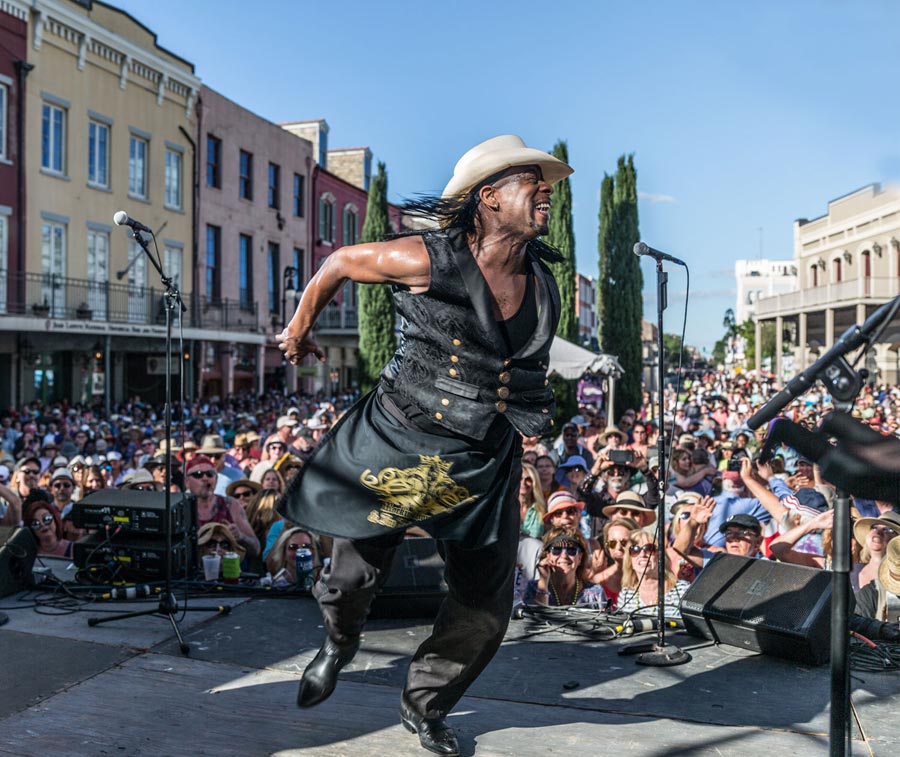 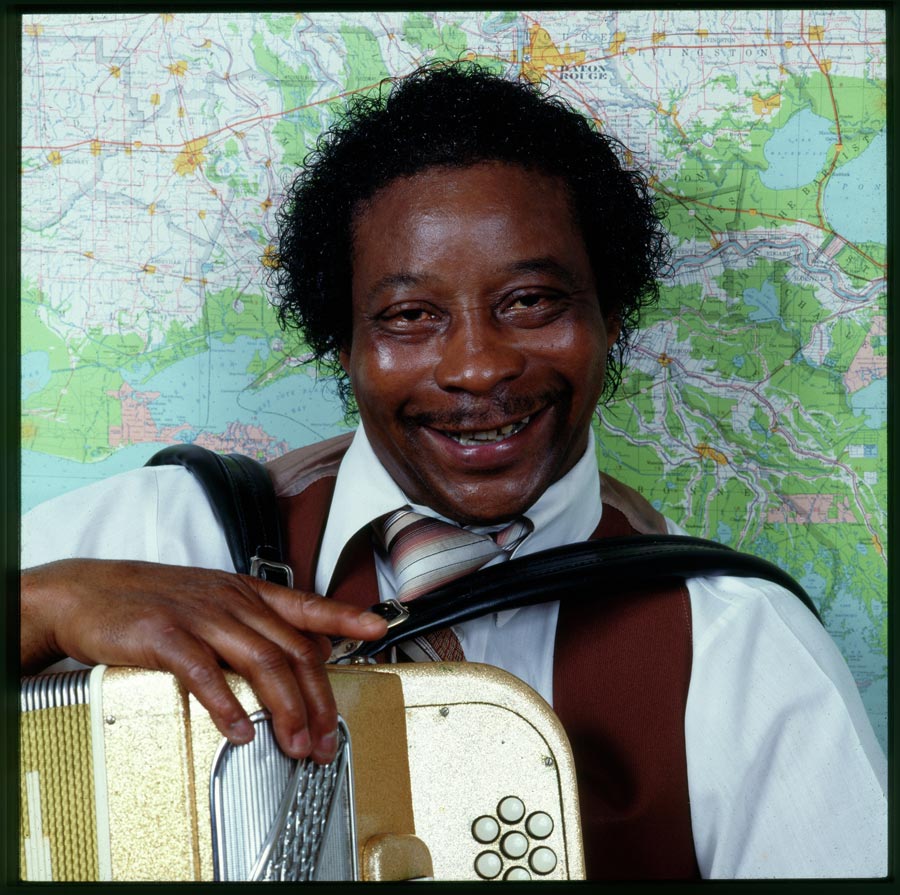 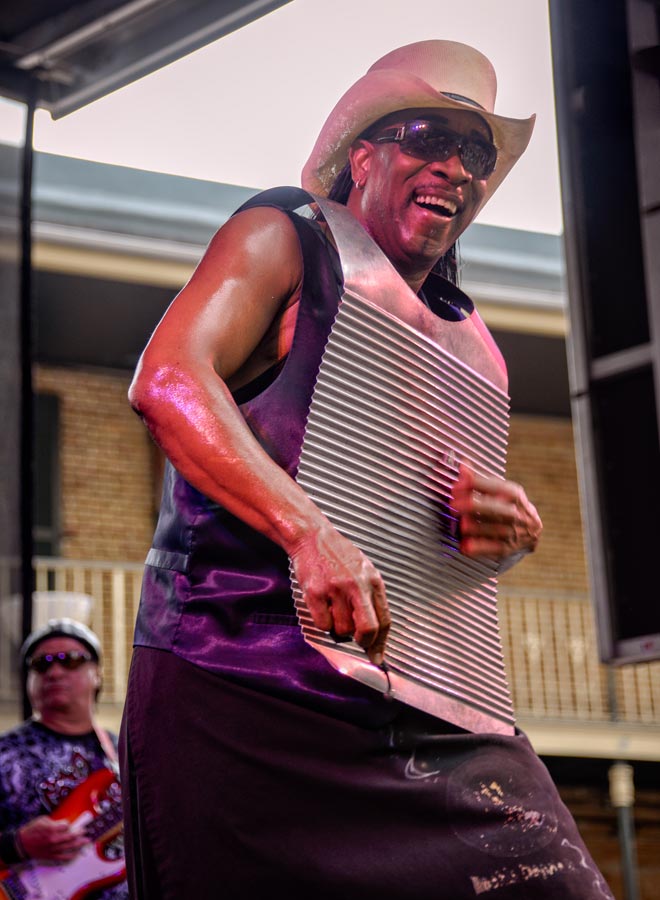 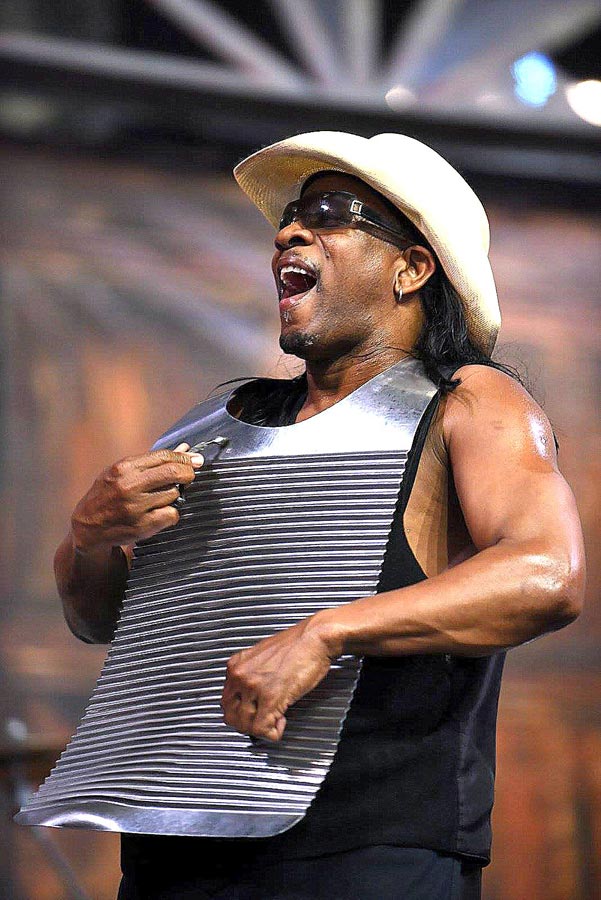 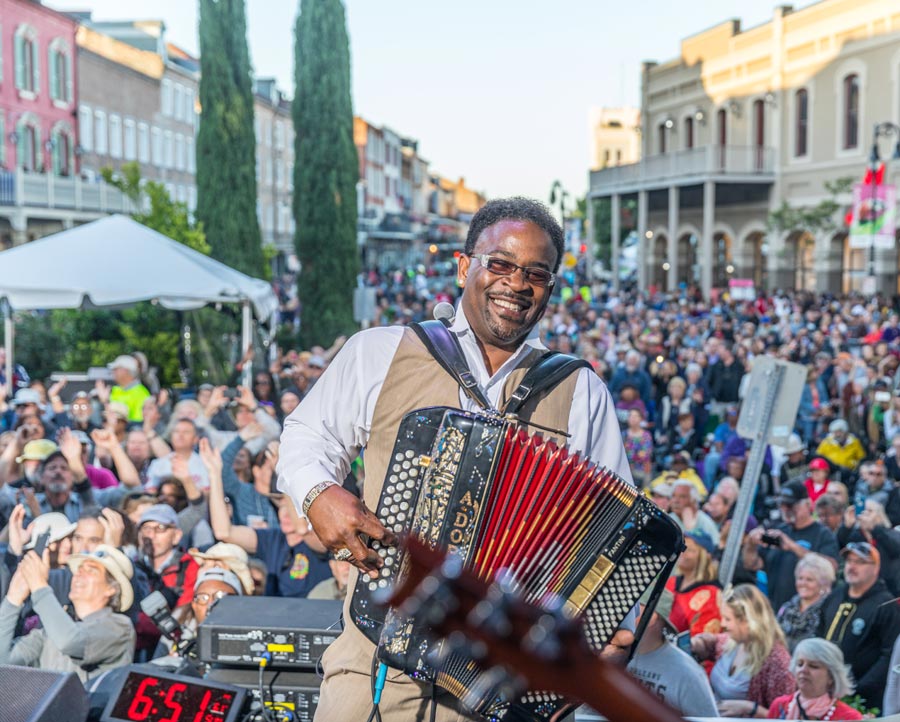 Everyone is out this spring at the many festivals offered and the choices for music and food are mind-boggling! While you are out and about, be sure to dip into an explosive set of zydeco music and you won’t be able to resist the urge to dance! Zydeco music is a bubbling, melodic gumbo concocted from Cajun and Acadian music stirred together with Afro-Caribbean rhythms and call-and-response songcraft. “The only way you could be more funky is if you’d been born a skunk,” claims local music icon Cyril Neville of The Neville Brothers. This funky upbeat tempo music with a rich heritage is sure to give you “happy feet”! It has broken out of its southern Louisiana breeding ground to enjoy widespread popularity throughout the world.

The zydeco explosion started when Alton Jay Rubin performed as Rockin’ Dopsie, singing and playing accordion. Born in Carencro, Louisiana to an accordion player, Rubin’s first language was Creole French. At 14, he was given an accordion. Since he was left-handed, he learned to play it upside down and soon outstripped his father’s abilities. “I’m the only man in the world that plays the accordion upside-down,” Rockin’ Dopsie said. “It’s all because Daddy didn’t taught me how to play. I just picked it up.” He began playing in clubs in the mid-1950s while he continued with his electrical contractor career. In 1976, he appeared at the New Orleans Jazz and Heritage Festival and was signed by the Swedish record label Sonet, who issued his first album, Doin’ The Zydeco in 1976. In 1979, he toured Europe regularly with his group, the Twisters, and his popularity there led to him recording a string of albums and gaining attention in the United States. At age 21, his son David was given his first rub board or frottoir, a must for the authentic presentation of zydeco. The rub board was David’s ticket to joining his father’s band in 1982. Dopsie, Sr. played accordion on Paul Simon’s Graceland album in 1986 and he also recorded with Bob Dylan and Cyndi Lauper. His final album in 1991, Louisiana Music, received a Grammy Award® nomination.

When Rockin’ Dopsie, Sr. unexpectedly passed away in 1993, the Dopsie family vowed to keep his memory alive with Rockin’ Dopsie, Jr. & The Zydeco Twisters. David “Dopsie” Rubin’s earliest musical memories are of his father’s accordion playing. David was given an accordion by his father at the age of nine and taught himself to play by listening to and playing along with the radio. No other zydeco band has ever been fronted by a rub board player but David Dopsie is the ultimate frontman, the Mick Jagger of Acadiana. The flamboyant personality of Rockin’ Dopsie, Jr., who also plays accordion and sings, can blow the roof off in a moment’s notice. He’s boogied with James Brown, packed the House of Blues, played at the White House, and traveled to more cities than a Greyhound. His oldest brother, “Tiger” Dopsie, is the band’s drum virtuoso and maintains the highly danceable rhythm. Another brother, Anthony Dopsie, a great accordion player, replaces his father in the band, playing the button accordion with the fervor of youth.

“I really loved that sound, but I needed more mobility so I could jump up and down and do my splits, you know. I must’ve inherited my love for the blues from my father ’cause I still listen to BB King, Jimmy Reed, the Vaughn Brothers and Bobby Bland, but when I was growing up, the Jackson Five, Sly Stone and James Brown were really happening.” The influence of these genres is evident in Dopsie, Jr.’s performances.

In 1994, Rockin’ Dopsie, Jr. & The Zydeco Twisters performed at the Smithsonian in Washington, D.C., for the presentation of the late Rockin’ Dopsie’s “King of Zydeco” crown for permanent exhibit. Rockin’ Dopsie, Jr., his band, and zydeco music were honored by this historic event as they had never been honored before.

Rockin’ Dopsie, Jr. is considered to be the best rub board player in the world; he is a charismatic and electrifying stage performer. His dancing, splits, and audience participation antics make the band’s performances exciting and keep listeners involved and dancing. “Somebody SCREAM!” Besides performing extensively on their own tours, the Zydeco Twisters have shared the stage with Tina Turner, Bonnie Raitt, BB King, The Neville Brothers, Dr. John, and Jimmy Buffett.

Rockin’ Dopsie, Jr. & The Zydeco Twisters have performed worldwide at the most prestigious music festivals. Be sure to catch them close French Quarter Fest on Friday, April 22nd on the Decatur Street Chevron Stage. He will also close Jazz Fest on Friday, April 29th on the Acura Stage. Dopsie really heats things up whenever he and the band perform. Above all else, they create a high-energy audience for a dance-’til-you-drop, dynamic show. It all begins when you hear, “Ladies and Gentlemen: Rockin’ Dopsie, Jr. & The Zydeco Twisters!”

Dopsie’s youngest of eight children, Dwayne, also plays accordion and leads his own band, Dwayne Dopsie & the Zydeco Hellraisers. His band adds a bit of rhythm and blues, funk, rock and roll, reggae and pop to their performances, making them a very versatile choice. Dwayne was named “The Hottest Accordionist” in America for his ability to both work the crowd and pump out musical harmony in grandiose fashion. He interacts with the crowd, blurring the barrier between himself and his audience. Fans jump to their feet energized by Dwayne’s musical innovation, charismatic performance and sheer, raw talent. His ability to capture the imagination, heart and soul of his audience makes Dwayne one of today’s most dynamic performers. Catch him on May 8th closing Jazz Fest on the Fais Do Do stage! The Hellraiser’s on-stage fury, also known as “Dopsie Mania,” is sure to make you a fan!

No trip to New Orleans and our many festivals is complete without tasting and subsequently dancing to zydeco music. Get up close and personal if possible and savor watching the performers as well as the many dancers. Zydeco dancing is intensely passionate and sexy and is heralded as the “new salsa.” Before long, you will find yourself shaking a leg then cutting a rug yourself! It’s irresistible!