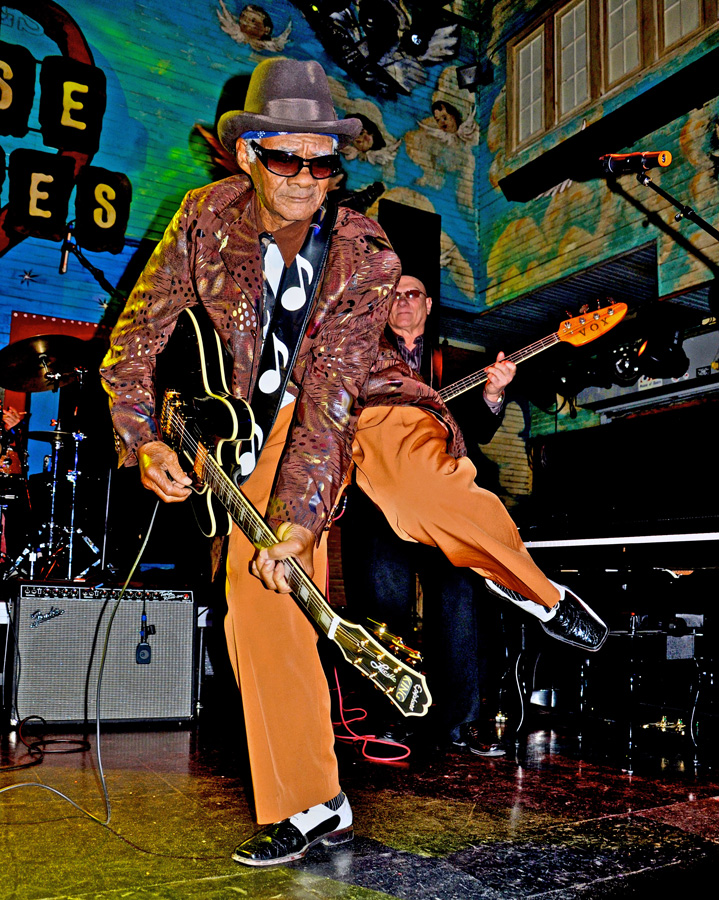 The official highway welcome signs in Mississippi say "Welcome to Mississippi, Birthplace of American Music," and few people typify that unique American music form called the Blues quite like Little Freddie King, who New Orleans now claims as its own.

New Orleans' Monarch of the Blues was born in 1940 in the heart of the Delta, yards from Bo Diddley's home in McComb, Mississippi. Fread E. Martin a.k.a. Little Freddie King grew up playing alongside his blues guitar-picking father on what was known as the "Chitlin' Circuit." Over half a century ago, with a little courage from Muscat wine, Freddie threw his clothes in a 50-pound flour sack, jumped on a train, and headed for New Orleans where he was influenced by South Louisiana bluesmen. Little Freddie honed his guitar chops while dodging bullets at notorious New Orleans juke joints like the Bucket of Blood, which he later immortalized in song, and the Dew Drop Inn. He has gigged with his cousin, Lightnin' Hopkins, as well as Bo Diddley, Freddie King, Buddy Guy, Slim Harpo, Champion Jack Dupre, Snooks Eaglin, and John Lee Hooker, among many others. While playing bass for the late great Freddie King, people began comparing the two musicians' styles, giving rise to his nom-de-plume. While well-vested in a variety of styles, Little Freddie sounds a lot more like Lightnin' Hopkins might sound after a three day corn liquor bender!

Little Freddie King not only plays down and dirty blues, he lives the blues. He spent his first three decades in New Orleans literally soaking up more life and near-death experiences than most folks who make it beyond the age of seventy. Shootings and stabbings (by his wife, among others,) jail sentences, drinking, all night rambling and plenty of hard work shaped him into the gritty bluesman he is today. After Hurricane Katrina, King lost his Ninth Ward home and was exiled to Texas where he really missed playing the blues in his Crescent City. Gibson Guitar and Music Maker Relief Foundation sent him a new "Lucille" model guitar, Sweet Home New Orleans brought him home, and Habitat for Humanity supplied a new residence in the Musician's Village. He feels inspired and blessed to be back home in the Ninth Ward.

Freddie's music is authentic; it's the "real deal." His soulful demonstration of rough hewn, raw vocal intensity comes straight from the heart, and his unique "jump timing" guitar style approach to rural electric "gut bucket blues" is unforgettably hypnotizing. King and his band have a penchant for hard-hitting, minimalist chords and lyrics with a steady rollin' seductive groove delivered by his cracked and gritty, heavily lived-in voice. Much of King's material has an old-style rhythm and blues feel as he leads his band with songs he writes and sings. "Wacko" Wade Wright (drummer, songwriter, producer, recording label owner), Anthony Anderson (bass guitar), and Bobby Louis Ditullio (harmonica) have played with him since 1996.

His newest CD, "Chasing tha Blues," takes you on a rough ride through Freddie's life on the bicycle that he is frequently seen pedaling around the French Quarter. You get to meet "Crackho Flo" and hang out at the "Bucket of Blood." The toughest, grittiest blues anthem you've ever heard, "Born Dead," takes you to a high row in the cotton fields back in his home in the Mississippi Delta; it is clear that these fields were for hanging. He sings about rocking at the d.b.a. on Frenchmen Street and complains about the toxic Chinese drywall that drove him out of his first post-Katrina housing. Welcome to Little Freddie's world, a life drenched with the blues.

Catch Little Freddie live on Frenchmen Street as he showboats his way through a blistering set that gives his audience the feel of being in a rural Delta juke joint or back porch. This fall, watch him perform his "Chicken Dance" on the HBO series, Treme. Or get mesmerized by our musical treasure at the many festivals around town and beyond; he has performed at every New Orleans Jazz and Heritage Festival! Our Monarch of the Blues is sure to take you back to another place and time and amaze you with his gyrating stage antics and gritty blues.