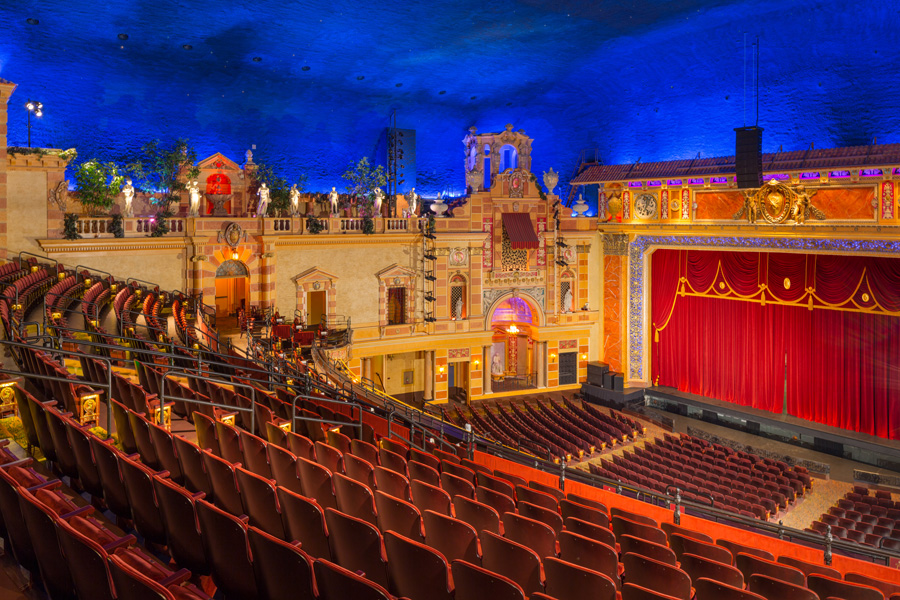 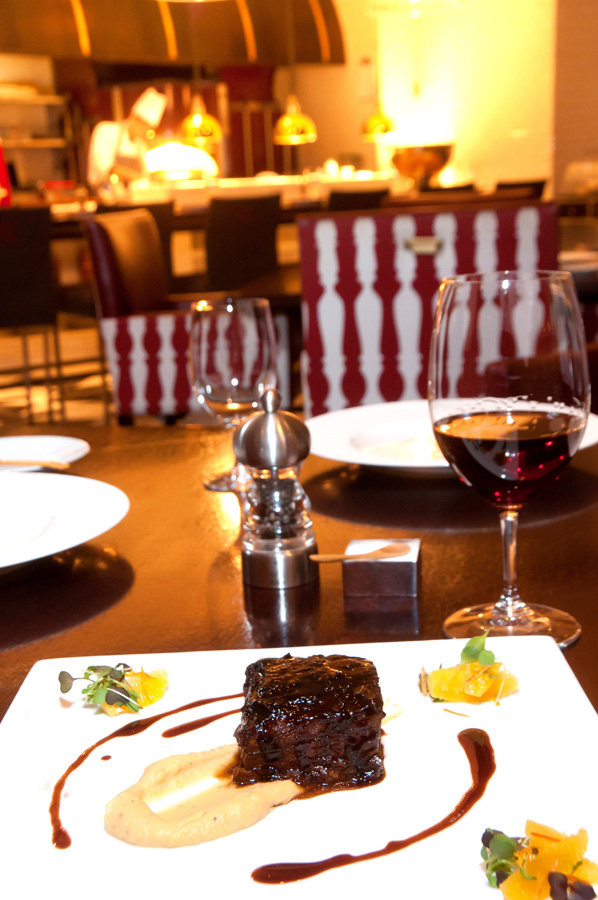 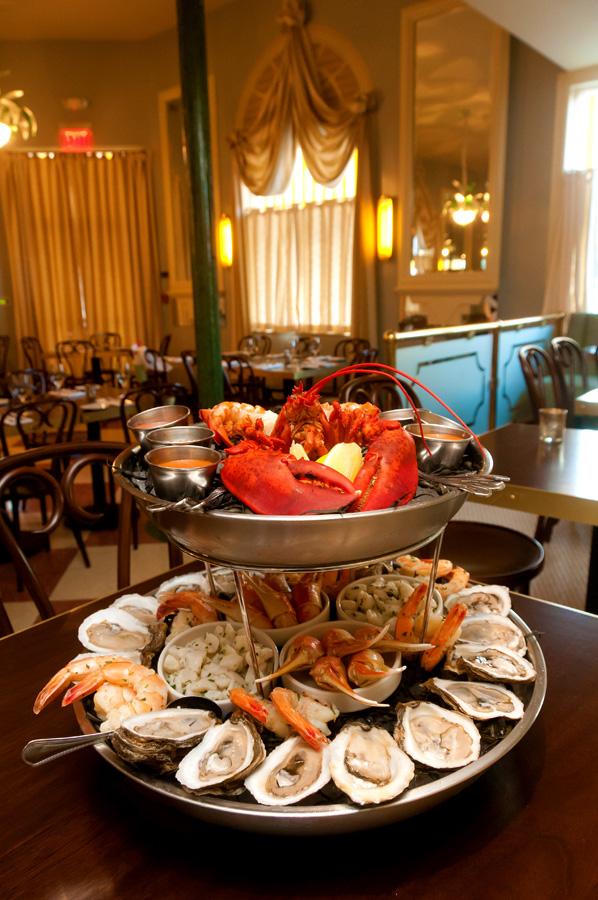 It has often been said that in New Orleans, dinner is an entire evening's theatre. The exciting dining scene is framed in stunning sets, complex social and cuisine interplay, defined roles, a cast of characters, and a satisfying close.

Now this city boasts one of the most dynamic live theater performance offerings you will find anywhere in the world, AND we still have the dining scene envied by America's other great culinary capitals.

It's Cue the Grand Dinner and Curtain-Up on a fabulous Show just about every night. Don't think the restaurants have not noticed the opportunity and they are truly setting the trend. When it comes to an amazing evening involving theatre and cuisine, there is no better place to be a full participant than in New Orleans.

The Saenger Theatre, spectacularly refurbished, recently reopened, and setting the drumbeat for the entire Theatre District, brings Disney's remarkable production, based on the Academy Award winning film, of Beauty and the Beast into town, February 4-9 for eight performances.

Multi-culturalism is applauded as Shen Yun brings 5,000 years of Chinese civilization to the Saenger on February 18-19 with a full-stage, full orchestra, Broadway-style presentation of music and dance. Return to the early days of the birth of rock-n-roll with the Tony Award-winning musical, Memphis, March 11-16, set for eight can't-sit-still-in-your-seat performances.

Jillian Michaels, America's leading proponent of health and wellness, comes to town for one performance only on April 1, followed by comedian Gabriel Iglesias' Unity Through Laughter Tour, April 4. Then it's Il Divo, an international classical crossover group, presenting Greatest Songs of Broadway Live, on May 6.

War Horse, a production Time Magazine noted as a "landmark theatre event," sets up for an eight performance run May 13-18.

Just a few blocks away from the two Broadway-type theatres is The Civic, a unique live music performance venue that is a part night-club and part repertoire-driven presentation venue. Acts waiting in the wings include The Airborne Toxic Event (February 8), Lord Huron with Night Beds (February 15), Dr. Dog with Saint Rich (February 19), Neutral Milk Hotel (February 20-21), Jim Jeffries (March 7), Pink Martin with the Von Trapps (March 27), Moe on Tour (April 25-26), Drive-By Truckers (May 2-3), and John Prine with Brandy Clark (May 9-10), among many others like a special presentation of musicians performing under the auspices of the New Orleans Jazz and Heritage Foundation (February 6).

The full Civic schedule of concerts and presentations is available at www.civicnola.com.

The more difficult decision to reach after the "what show should we see?" question is answered, is where are we going to dine? Within easy walking distance to any of the incredible theatres are a dizzying number of choices of dining venues, each quite special in any measurable way and all located in New Orleans' most famous neighborhood, the French Quarter.

One of the newer upscale bistros is Marti's, 1041 Dumaine at N. Rampart, 504-522-5478. This is a rebirth of a much beloved restaurant that has been shuttered for years. Intelligently, the new owners, experienced New Orleans restaurateurs of two other equally upscale dining destinations, refurbished and elevated the decor and interiors while retaining the comfortable feel of the old Marti's restaurant, which makes everyone feel quite at home. In the between-time, the Marti's location was Peristyle, one of the top restaurants in the country.

Chef Drew Lockett is proud to be a local lad returned home. Culinary Institute of America trained, Chef Lockett has done his turns in kitchens in Europe, Oregon, and New Orleans as well as north of Lake Pontchartrain in Covington and Slidell.

He knows his way around fowl and meat, but he loves to show-off a bit with seafood. Begin with a Fried Spanish Octopus or a Blue Crab Bisque. That sets the tone for his piece de resistance, the Grand Plateau Fruits de Mer, which includes a whole Maine Lobster, 12 chilled shrimp, marinated snow crab claws, 18 oysters on the half-shell, and scallop ceviche. In a town renowned for seafood, you have to be very brave to name something "Grand Plateau," and this does not disappoint.

Restaurant R'evolution, in the Royal Sonesta Hotel, 777 Bienville Street, continues to make its statements to the New Orleans dining community, just a little over a year since its opening.

Executive Chefs John Folse and Rick Tramanto have designed not only a great dining emporium, but have constructed a menu unlike any other in town. Their treatment of even the most traditional of Louisiana dishes, like gumbo, amazes the most jaded diners.

The pre-Theatre menu starts with that gumbo, followed by a fresh House Salad, and then comes your choice of Gulf Shrimp with chilies and ginger atop stone-ground cheese grits; or Braised Boneless Short-Ribs, topped with a rutabaga and citrus puree brought together in rich red wine sauce. A choice of desserts from Executive Pastry Chef's Erin Swanson enticing creations tops off the meal, leaving you with a grand memory at the beginning of the evening. What a way to start your Dining then Theatre adventure!

Another local and visitor favorite restaurant has just undergone an extensive and wholly successful revamp, re-opening to great acclaim. Home to great figures of the entertainment and literary world, such as Tennessee Williams and William Faulkner, Broussard's, 819 Conti Street, 504-581-3866, is also home to Carnival Royalty, and is likely to become even more popular with all that has been accomplished.

Chef Guy Reinbolt and General Manager Chris Ycaza have breathed new life into the respected location, listed on the National Register of Historic Places. Yet, in the end, in New Orleans, it's all about the cuisine.

Your difficult decisions continue, trying to choose between Slow Roasted Half Pheasant or the unique Louisiana Lump Crab Stuffed Domestic Lamb Rack. The good news is that you cannot make a wrong choice.

One of the newer dining destinations in the Quarter is truly a stunner. A place where the owners put in so much design and renovation effort, even they were impressed with how the place turned out. Doris Metropolitan, 620 Chartres Street, (504) 267-3500, is practically a theatrical experience in itself.

Specializing in aged beef cuts, but offering many creative dishes based in seafood, chicken, and veal, Doris has been received with open arms by the local community, and they are very tough critics.

Begin with the Tuna Tartare which truly defines this oft-made dish. You will compare every other one you order from now on with this version. If you are in a particularly carnivorous mood, there is also the Chateaubriand Tartare, highlighted with Dijon mustard and a quail yolk.

Then you can move on to other selections, including the beef cuts, like Rib-Eye, bone-in New York Strip, or Tenderloin, each aged from 21 to 31 days right in the restaurant. But you might also find the Red Tuna, the 30-Hour Pork Chops, or the Veal Cheek irresistible. No one would blame you.

In all, while deciding on which show to see and what theatre to patronize, those are fairly easy decisions when measured against the choice of where to dine. New Orleans can be a confounding place"....in a good way, of course.