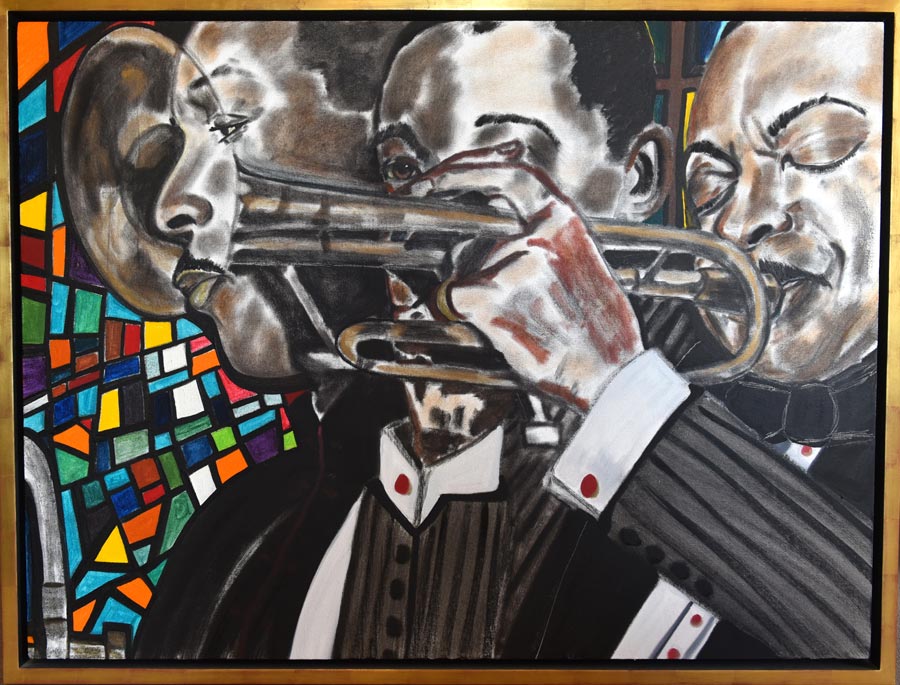 In October 2022, the New Orleans Jazz Museum will joyfully exhibit their recent acquisition of the large, detailed paintings of Frederick Brown. Donated by his widow in June of 2021, his portraits celebrate those who have made important contributions to contemporary culture.

Frederick Brown (1945–2012) was a New York City and Arizona-based American artist. He was born in Georgia and raised in Chicago’s South Side. In the New York art and music renaissance of the 1970s and 1980s, his Soho loft was a gathering spot, salon, and studio for musicians, painters, writers, dancers, and performance artists. His work has been exhibited in the Smithsonian, the Kemper Museum, The White House, the Metropolitan Museum of Art, and Xavier University. In 1988, Brown was the first Western artist to have a solo retrospective exhibition at the National Museum of Chinese Revolution at Tiananmen Square in Beijing.

Brown’s work to be exhibited draws from his extensive series of over 350 musician portraits. These paintings mix the abstract and the figurative while also giving insight into the lives of musicians in general. The subjects at the museum will include Louis Armstrong, Jelly Roll Morton, Sidney Bechet, Billie Holiday, Wynton Marsalis, Bix Beiderbecke, Thelonious Monk, Charlie Patton and Ray Charles.

In 1991, Frederick Brown told the Washington Afro-American newspaper, “I think my heritage has a great significance to the images I produce, but you can limit people with a name or a title to only serve one group. When you see my work, you can tell it is done by someone who is Black. But I want to provide as many beautiful things to the world as I possibly can.”

Frederick Brown’s roots in his working-class neighborhood on Chicago’s South Side contributed to his love of the blues in the 1950s. Brown’s father was friendly with many well-known blues musicians, including Muddy Waters and Howlin’ Wolf, and Jimmy Reed lived in the neighborhood. Brown studied Art and Psychology at Southern Illinois University, where he earned his B.A. degree in Art. He taught for several years in Chicago and Carbondale, Illinois, and traveled to Europe in 1969. In 1970, he moved to New York’s SoHo district to become a professional painter, but supported himself by teaching part-time at the Brooklyn Museum, York College, and the School of the Visual Arts.

Brown’s paintings of the early 1970s were large, bold abstractions based on the abstract expressionist tradition of the Art Department at Southern Illinois University. In 1975, Brown met the noted American painter, Willem de Kooning. De Kooning encouraged Brown and he affectionately referred to de Kooning as his “artistic godfather.” Brown’s large gestural paintings attracted widespread attention and by the mid-1980s were exhibited at the prestigious Marlborough Gallery in New York.

By the late 1970s and into the early 1980s, Brown gradually included figural elements, a change that coincided with his creation of some landscape paintings reminiscent of folk art. In the mid-1980s, he began a series of paintings that immortalized the friends, mentors, and colleagues who had exerted the greatest influence on his life.

Brown’s background and long-standing interest in the blues logically led to the next phase of his career. Shortly after his arrival in New York in 1970, he had collaborated with jazz giants Ornette Coleman and Anthony Braxton on a variety of multimedia projects. Brown’s meeting in 1969 with Chicago Bluesmen, Earl Hooker and Magic Sam at a music festival in Denmark led to a suite of works twenty years later. Hooker and Magic Sam told Brown that they were more appreciated in Europe than in America, and Magic Sam predicted that after their deaths they would be quickly forgotten. Ironically, both men died shortly afterwards, and Brown vowed that he would do something to ensure that they would be remembered.

Two decades later, Brown felt ready to honor the pledge he had made in Denmark. He traveled to the Deep South to conduct research for a documentary on blues singers. Since he had never spent any time in the South, he felt that it was important to visit the setting that gave birth to the blues. Brown went to Clarksdale, Mississippi, where he visited the town’s Delta Blues Museum. He talked with local blues musicians and elderly black men who regaled him with stories about early blues artists.

Returning to New York, Brown began a series of portraits of blues musicians that he felt would preserve the spirits of these artists. “Like the best painters,” he stated, “those musicians had the ability to strike the universal heart chord.” We look forward to viewing Frederick Brown’s paintings at the Jazz Museum and we are confident that they will strike our universal heart chord.