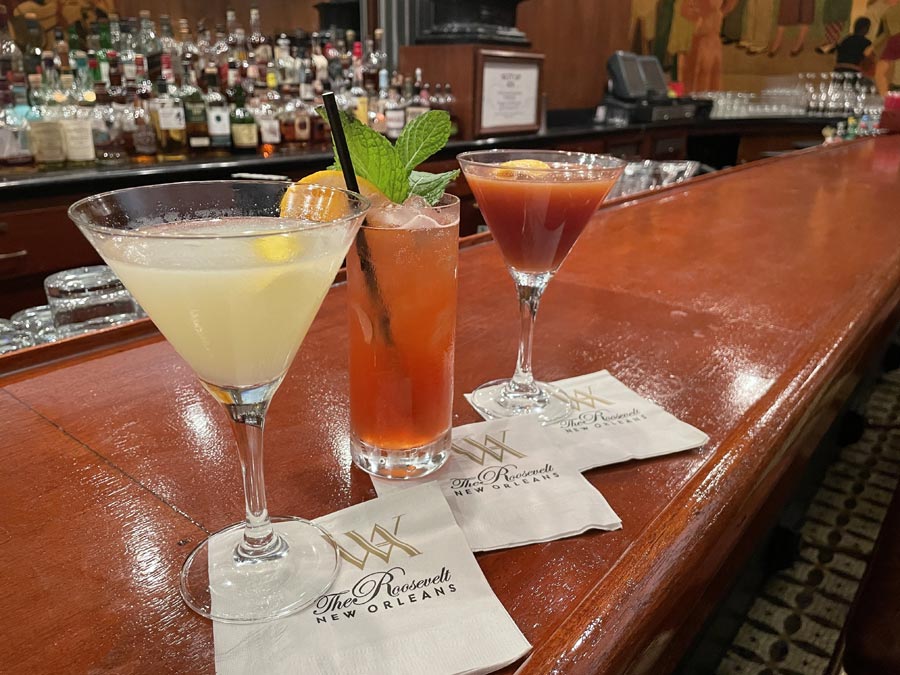 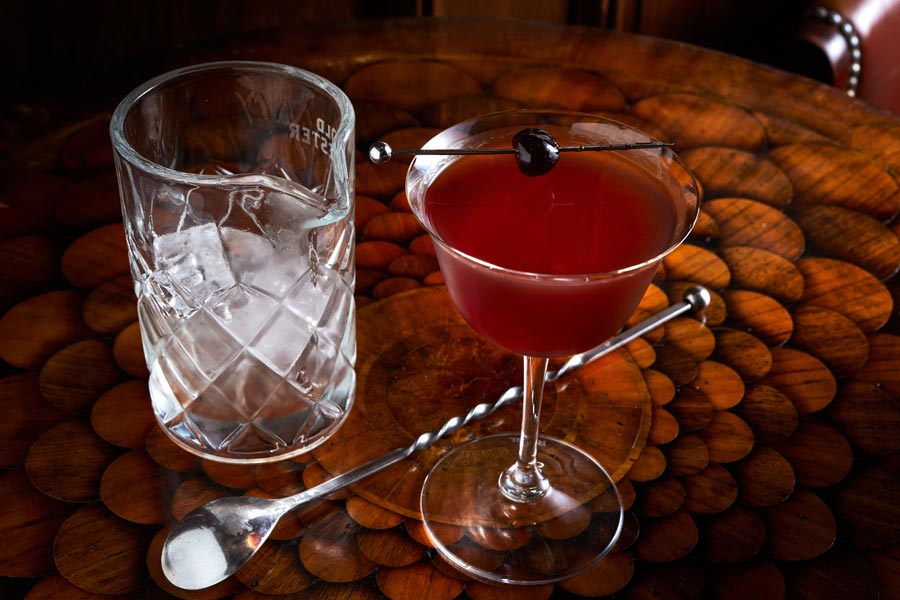 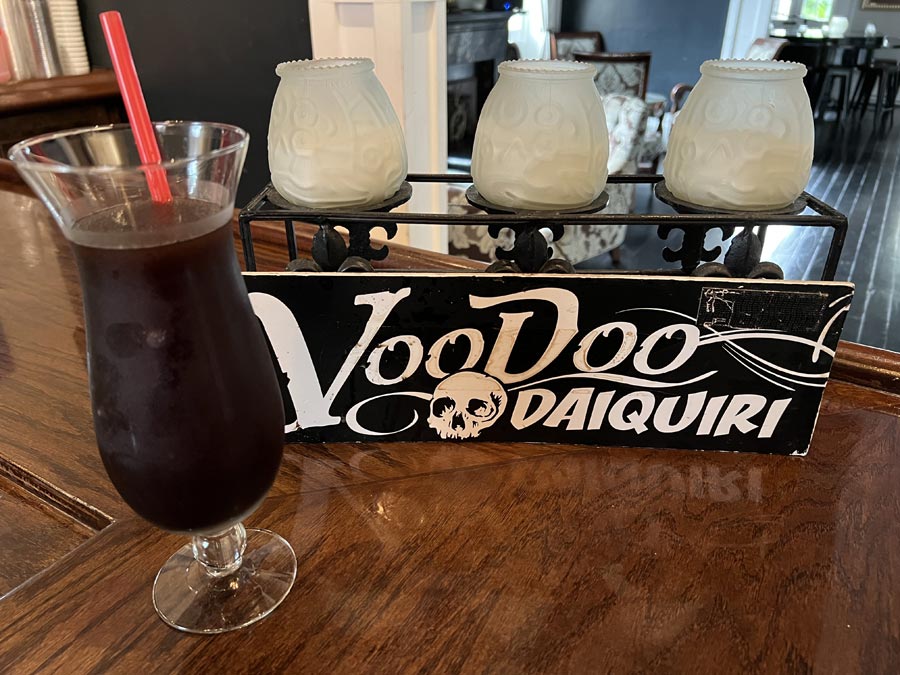 Dozens of bottled spirits line the backbar of Lafitte’s Blacksmith Shop. But this legendary dive on the corner of Bourbon and St. Phillip is equally renowned for spirits of the spectral variety. Occupying one of the oldest buildings in the French Quarter and one of the oldest examples of briquette-entre-poteaux (brick between cypress posts) architecture, it is named after Jean and Pierre Lafitte, notorious smugglers and privateers of the early 19th century. The brothers used this space as a base of operations during that time, and ultimately Jean became a local hero after helping Andrew Jackson fend off the British during the final major skirmish of the War of 1812. That hasn’t stopped him from reappearing at his old haunt. Patrons have reporting seeing his full-body apparition creaking along the bar’s centuries-old floorboards. Some say he is guarding a treasure he hid within the walls of the fireplace. Many claim it is the oldest bar in the United States, founded in 1775. In actuality, it received its first liquor license in 1933, directly after the repeal of Prohibition. We don’t know what Jean Lafitte was mixing up here in the early 1800s; maybe go in and ask him yourself.

Of course, it doesn't help that the establishment’s famed Voodoo Daiquiri is the signature cocktail. The sweet grape-flavored frozen daiquiri is spiked with bourbon and Everclear 190-proof alcohol that could sedate a mule. Enjoy a live pianist as you polish off a couple of these, or their equally strong Hurricane made with two kinds of rum, and you’ll likely see all kinds of things in the ethereal candlelit ambience.

Lafitte’s Blacksmith Shop is home to a set of disembodied “piercing red eyes” that stare out from beyond unlit corners of the room. You may notice the menacing manifestation out of the corner of your vision. When you turn to meet them, they look into your soul, and then slowly fade away, perhaps some indicator of demonic haunting… Or, more likely, too much of that purple drink. To experience the ambience of Old-World New Orleans, visit our beloved landmark, The Napoleon House, on the corner of Chartres and St. Louis. For almost two centuries, it has exuded a European charm that is a mecca for civilized drinking and eating. Nicholas Girod, Mayor of New Orleans from 1812 to 1815, built the home around 1800 with the intention of being “the finest in the city.” He had the optimistic plot to provide refuge for the exiled Emperor Napoleon Bonaparte. You won’t be sharing happy hour with the ghost of Napoleon; he never made it to the house. New Orleans learned of his death just three days before they planned to launch the mission to save him. Later, the house was a Civil War hospital, and legend has it you can still see one unfortunate soldier walking the second-floor balcony in the early morning hours. The ghost most frequently encountered is a little old lady sweeping the second-floor balcony in the early morning hours. Perhaps the woman sweeping is stuck in a loop, destined to move a broom into eternity. After everything is cleaned and put away for the night, staff often discover mysterious glasses sitting out on the counter as if a ghostly patron is yearning for the late-night parties of the Roaring Twenties.

The bar and restaurant proudly established itself as a place that “suspends you in time,” over a Pimm’s cup and their famous Creole specialties and muffulettas. The staff shows their guests the same warm welcome reserved for Napoleon. If you stop by, give a second thought to the abandoned glass next to you at the bar. Listen closely through the classical music for sounds of sweeping. Keep a sharp eye out for an oddly dressed fellow on the second-floor balcony if you’re dining in the courtyard. You never know who you’ll meet at this historic restaurant. The walls with deep patina, uneven floors, luminous photography, and a sea of quotes from famous to regular guests covering the walls between the weathered paintings, speak to the many decades of dedicated service and it stands out as one of the world's greatest bars. If only these walls could talk…

Their signature Pimm's Cup made its mark at the Napoleon House bar in the late 1940s among the bon vivant set. The essential ingredient is Pimm’s No. 1 Liqueur, a gin-infused liqueur with herbal botanicals, caramelized orange and delicate spices. For the Pimm’s Cup, it is mixed with fresh lemonade, 7-Up, and garnished with a sliver of cucumber. You will savor this deliciously unique cocktail in this historic space!

For live jazz, classic cocktails, and elevated pub fare, indulge in the Polo Club Lounge on the second floor of the Windsor Court Hotel. It is reminiscent of a private English club, decorated with dark woods and overstuffed leather furnishings. This haven for both locals and visiting celebrities is the ideal atmosphere for everything from a pre-dinner cocktail to a nightcap. Offerings include classic cocktails, beer, wine, live music, and one of the largest Cognac collections in the city, all complemented by a menu of elevated pub fare. Try a classic Manhattan in which the combination of Still Austin Straight Bourbon, Carpano Antica Vermouth, and Trans-Atlantic Bitters come together for an iconic cocktail. If you would like to sample a mocktail, ask for a Laviolet Spritz which has Lavender & Violet Syrup, Fever Tree Soda, and lemon. It’s so beautiful you will admire it before sipping! Enjoy piano performances by John Royen and David Boeddinghaus from 6 to 10 p.m. nightly. On Friday and Saturday nights from 9 p.m. until midnight, you will be captivated by Robin Barnes who was officially proclaimed The Songbird of New Orleans! This charismatic songstress has a soulful voice inspired by Etta James, Bruno Mars, and Adele.

More than just a bar, The Sazerac Bar is a landmark that has kept the drinks and conversations flowing for decades. Here, inside the sophisticated Roosevelt Hotel, you can sample the cocktail that many consider to be the world’s first mixed drink, the Sazerac. The Sazerac carries as much history as its potable namesake. Just gazing at the famous Paul Ninas murals flanking the African walnut bar takes you back to the grandeur of old New Orleans, a time when Huey P. Long would stroll in, order a Ramos Gin Fizz, and spend the next couple of hours talking to his constituents.

Restored to reflect the spirit of the original establishment, elegant bar stools and plush banquettes invite locals and visitors alike to enjoy hand-crafted cocktails and free-flowing conversations. Kickstart your evening off in style at a New Orleans institution named the #1 Hotel Bar by thousands of voters in the 2019, 2020, and 2021 USA Today’s 10 Best (while nominated for 2022, so vote!) and is CNN Travel's #1 Hotel Bar in the Americas. ’Tis the season to order the Zombie, invented by Donn Beach in 1934. Be careful with this one as it might not re-animate you the way you thought. This cocktail includes Bacardi Cuatro, Plantation OFTD, Falernum, Cinnamon Syrup, Grapefruit, Pernod, Lime, Grenadine and Angostura Bitters. Or maybe if you prefer gin, try the Corpse Reviver. From the 1930 Savoy Cocktail book: “To be taken whenever steam and energy are needed.” This cocktail consists of Bombay Gin, Cointreau, Cocchi Americano, Lemon and Absinthe. If you prefer scotch, maybe Blood and Sand will float your boat. Named for the 1922 Rudolph Valentino movie, you’ll be ready to take on a bull after a couple of these. This drink is made with Dewar’s Scotch, Cherry Heering Liquor, Carpano Antica Vermouth and Orange. Any of these classic cocktails are scary good and will give you the liquid courage you need to confront any ghost or goblin that may come your way.

For a truly vibrant French Quarter experience, let the good times roll at the Bourbon “O” in the Bourbon Orleans. Relax in the warm candlelit cozy atmosphere with your choice of charismatic cocktails. The Bourbon “O” Bar manager, Cheryl Charming, was named 2015 Mixologist of the Year by New Orleans Magazine and is the author of seventeen books including her 2022 release, The Bartender’s Guide to Cocktails. Charming and her team can conjure any drink you can imagine from historic New Orleans cocktails to fresh and seasonal beverages. It’s a gathering place for local jazz artists from every corner of the city to come together in revelry, providing you with live music from 4 p.m. until midnight daily. Treat yourself special with a Ramos Gin Fizz which combines Aviation Old Tom Gin, Orange Blossom Water, lemon and lime juice, egg whites, powdered sugar, heavy cream, and seltzer. Wait until you see the machine that shakes this cocktail for six minutes! It’s worth the wait! Another favorite signature drink is the Pimm’s Cup. It has Pimm’s No. 1, lemon juice, raw simple syrup, seltzer, and Ginger Ale blended to perfection. Sit back and enjoy a perfectly crafted cocktail, some easy jazz, and a great vibe.

All mere mortals are invited to sip on these spooky cocktails. Who knows? Maybe you’ll summon some spirits to sip and converse with about life in the grand old French Quarter long ago.