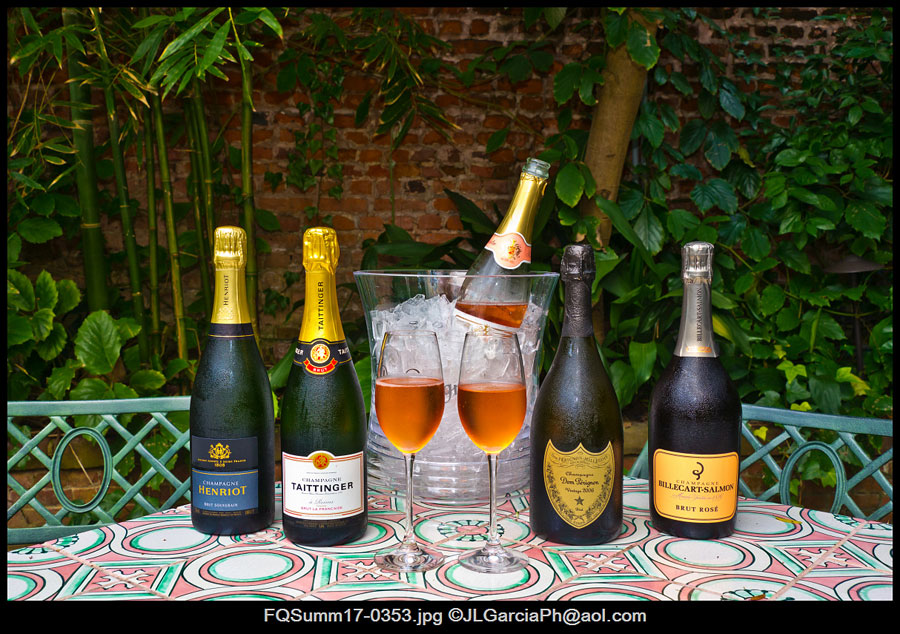 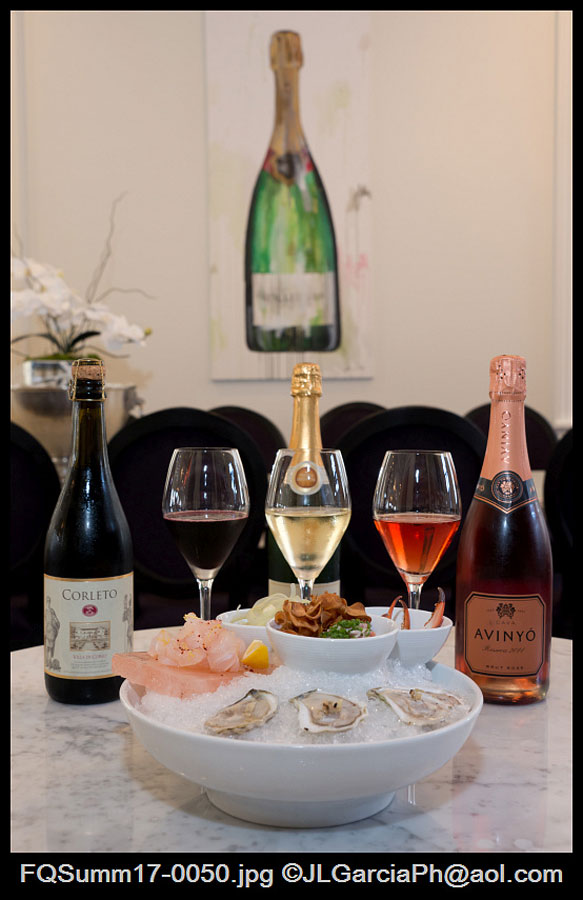 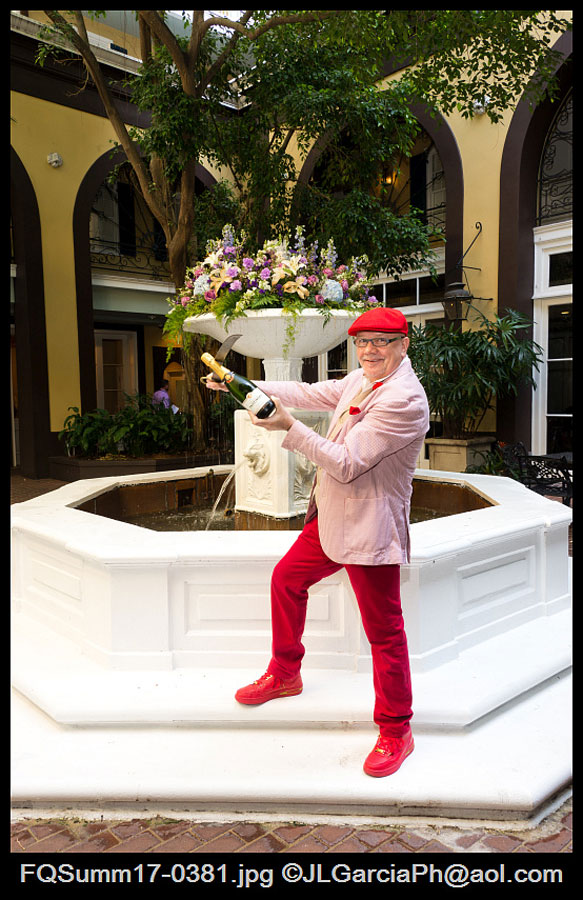 It is no secret that serving wine, in which there are bubbles, adds to the festive occasion when a bottle is opened. That has been true since the early 1700s.

Another part of that undeniable fact is the location of where the bottle is opened is also of prime importance. Add that to the beauty of the surroundings and the bonhomie of those in attendance, this then is one of life’s great pleasures: a satisfying bottle of wine that actually talks to you, at a happy moment, in a special place, shared with good friends. Kismet!

There is no denying that in the entire world, the French Quarter in New Orleans is one of those very special places. Surrounded by beauty, history, happiness, celebration, and culinary delights… whatever the occasion may be, makes the wine taste that much more extraordinary.

The French Quarter excels in offering venues where Champagne and Sparkling Wines are made to be a part of the scene.

The new Rampart Street Champagne bar, Effervescence, subtitled “Bubbles & Bites,” was uncorked to wild enthusiasm during the Grand Opening in middle March. Bubbles were everywhere, most notably in the wine!

Repeat customers, and, yes, there are already plenty of those, affirm that Owner Crystal Coco Hinds, and General Manager Noah Bonaparte Pais have a hit on their hands!

The renovated, historic Creole cottage, that is the home of Effervescence, is a timely and stylish fit with the ongoing unveiling of the renaissance of the North Rampart Street corridor. An impressive redevelopment spurred on by the new streetcar lines, bright lighting, and smooth streets. Each complements the other and completes the tout ensemble.

Effervescence has found its place on the street in an1880s-era former residence which retains much of its historic exterior architectural details – except for the added hand rails for extra safely entering and leaving the bar. Once inside, however, you’re in a whole new world.

Refinished, original hardwood floors cover the large open space of the bar’s main room, surrounding a central, U-shaped bar. Seating and tables rim the large room. Other seating arrangements are set up in a second room, which leads to a cozy, bricked patio on the rear of the premises.

Effervescence rocks with its party atmosphere, the ballyhoo, the hail-and-hardy hugs and greetings between friends and acquaintances, the laughter, and clinking of glasses, …. all happy sounds, but the bar’s most sensual sound is the soft, slow release of corks from sparkling wines.

When it comes to taste, however, to each his or her own. General Manager Pais, who is also Effervescence’s sommelier, has compiled a list of more than 90 by-the-bottle wines, mostly sparkling, to help patrons find what suits each person’s palate.

The showcase names of French champagnes are well represented: Taittinger, Gosset, Roederer, Lallier, and Gusbourne, among others. A further pursuit will bring added treasures not so infamous but worthy of attention. There are Cavas from Spain, Cremants from several areas of France, Prosecco from Italy, and Sekt from Germany to fill out a satisfactory selection to make the choice of what to enjoy even more exciting.

The depth and quality of the sparkling wines and champagne lists continue on into the offerings of still wines and beers from all over the globe.

Wines by the glass are also on the menu. The additional wine items are offered by the glass for one grouping, and the bottle for another cluster, which adds variety and a sense of adventure.

The Bites, created by Chefs Brenna Sanders and Evan Ingram, include small plates of pommes frites, a mushroom tartlet, grilled octopus, and caviar with crème fraiche and potato chips. Other bites featured are seafood plateau, buttermilk chicken, grilled half wheel of cheese, lettuces and crudités, and grapefruit with sabayon, caramel and meringue. A smaller menu is available late night after 10 p.m. Open Wednesday- Sunday.

In the heart of Royal Street’s shopping scene is the restaurant known around the world by just one word, Brennan’s. It is a well-appointed palace paying homage to good taste and gracious living. To encourage participation in this bucolic scene, every day there’s Bubbles at Brennan’s, on the courtyard and in the Roost Bar.

Monday – Thursday, 2 – 7 p.m., Brennan’s serves champagne and sparkling wines from the most renowned wineries on Earth. On Friday, Brennan’s hosts Bubbles at Brennan’s beginning at 9 a.m. until 7 p.m. At 5 p.m. there is a demonstration of the art of Sabering Champagne where a sword takes center-stage in a dramatic bottle opening, which is not to be missed.

The wines featured during the special hours change each week, but the usual marques are brought forward at prices not seen anywhere else. Many are at less than 50% of the regular restaurant bottle prices. Examples of these great wines are Delamotte Brut, Montmartre Sparkling Rosé, Henriot Souverain Brut, Taittinger La Francaise Brut, Krug Grande Cuvee Brut, and Billecart Brut Rosé.

Wines of all styles are also presented by the glass and cocktail specials are available. Bar snacks from the award-winning kitchen of Brennan’s is a nice adjunct to the festivities.

Besides the Creole ambience at every turn, you will be engulfed by the history of this place. It was constructed in 1795 by the grandfather of famed Impressionistic painter, Edgar Degas. It was also the site of the Louisiana State Bank, a former home which once hosted Andrew Jackson and the home of the New Orleanian international Grand Chess Master, Paul Morphy.

A glass of French champagne seems quite appropriate in this structure perhaps on the courtyard.

A cocktail made popular in Paris and New Orleans is also the name of the intimate bar at Arnaud’s Restaurant, the French 75 is a true connoisseur’s delight.

The drink was created in Paris during the waning days of World War I. It was named for a favored gun, a 75-mm cannon, used by the French in battlefields all over that storied land. The legend is that the cocktail was created at the Ritz Hotel on Place Vendome, in the heart of Paris by a Frenchman, an American, and an Englishman, which is why gin is incorporated into the Champagne-based recipe. Later, brandy was introduced to replace the gin.

No matter what your preference, the center point for the enjoyment of this drink is the bar with which it shares a name. Local legend, Chris Hannah, is the go-to mixologist/head bartender, holding forth at French 75.

Recently, the bar installed a champagne dispensing machine. It is one of only three in the world and it is the only one located in a restaurant.

Arnaud’s patrons are some of the first to experience this one-of-a-kind champagne vending machine. Noted French Champagne house, Moët et Chandon will be partnering with Arnaud’s French 75. The machine will be stocked with 320 mini bottles of the champagne’s Imperial Brut.

While French 75 at one time was an all-male bar, that most certainly is no longer the case. The décor, with all of the beautiful dark woods and elaborate decorative mirrors, does still lean a bit to the formal side. Yet the comfort of the room and its restrained energy, gives the feeling of a private club, not a grand restaurant.

Chris Hannah is admired world-wide for this prowess behind the bar and his talents at making the definitive cocktail of the genre, no matter what the order. A visit to this bar, or New Orleans’ French Quarter, without discovering the pleasures of a French 75 would indeed be a travesty!

As everyone who has ever passed through the doors of a bar knows, the establishment takes on the personality of the patrons, the products offered, the history of the site, and the owner.

One would be hard-pressed in New Orleans to find a more outgoing and sincere owner than Patrick Van Hoorebeek, the owner of Patrick’s Bar Vin. A Belgium transplant to a Creole City, and an appreciator of fine wines and fine Champagne. By any yardstick, a most interesting and engaging fellow.

Patrick’s Bar Vin, named one of the Top 10 Wine Bars in the US by both Gayot and Fox News, is situated on the edge of a private courtyard, surrounded by the Hotel Mazarin, with a grand fountain at its center.

The Bar is entered just a few doors from the craziness and good times of Bourbon Street, walking though a small tree-shaded courtyard and into an ante-room perfect for relaxing and escaping the din of one of the world’s most famous strolling/party streets.

The heart of Patrick’s Bar Vin is a tasteful and impressive wood-bar. Located in another comfortable sitting room enhanced with charming furnishings and décor, the walls are actually small vaults with private wine lockers so regulars can keep their favorite beverages close at hand.

Yet the real heart of Bar Vin is Patrick himself, a man who came to America first and then found New Orleans, much to his eternal happiness. He is obviously not from this City, yet he fits in beautifully. His accent is not like anything spoken locally.

His love of champagne is legendary and he features the wine throughout his wine lists. While champagne is at the top of his wine-love roll-call, Patrick is happy to recommend other wines with bubbles from other places.

He features Prosecco from Italy, Cava from Spain, Sparkling Wine from California and wines with bubbles from other places in France outside of Champagne. Patrick is also partial to Rosé sparkling wines and champagnes, feeling that the extra dose of red fruit really puts the wine at ease with food. Bon Appetit!