That Time it Snowed - in New Orleans! 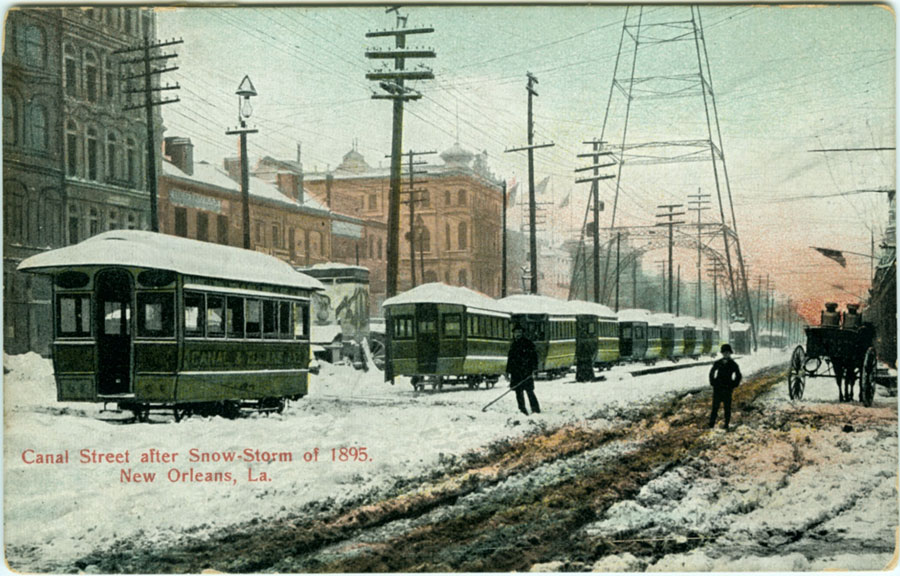 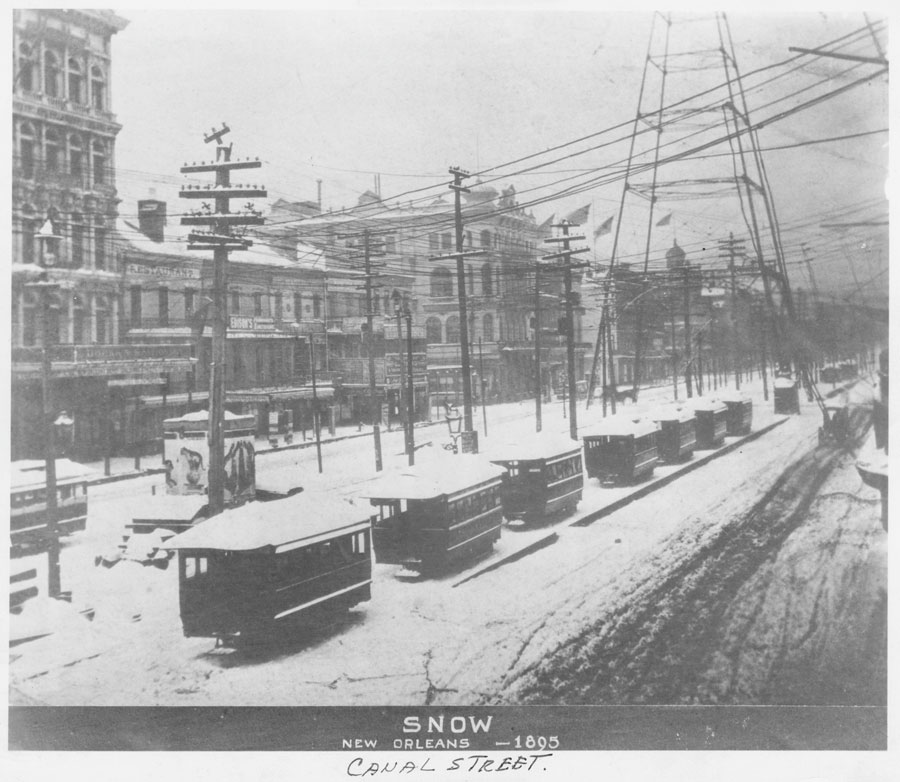 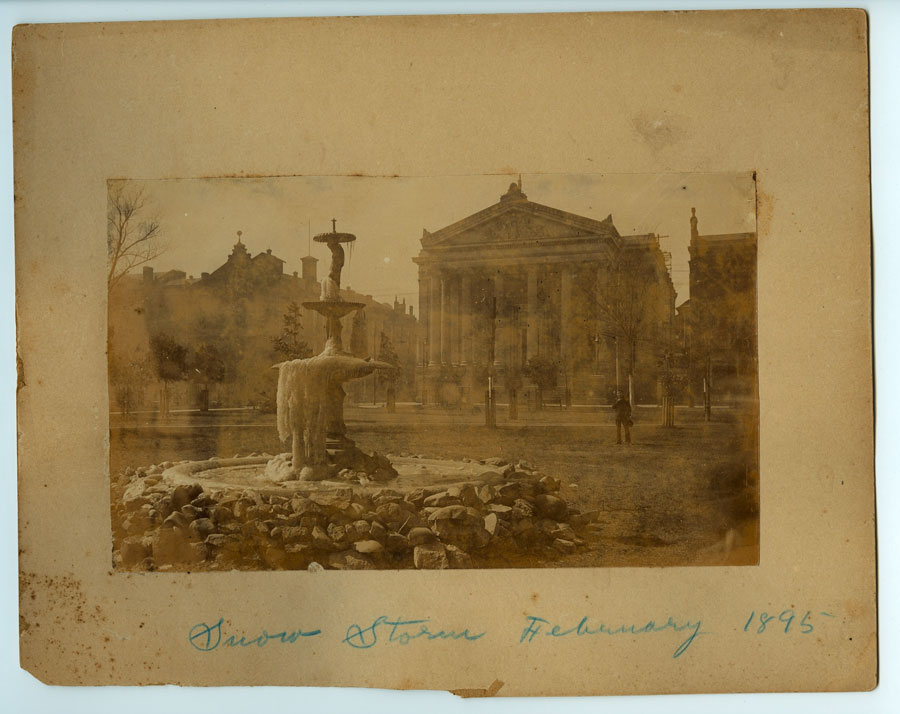 New Orleans weather has a few predictable patterns. The summers are sizzling, with temperatures soaring above 90 degrees for weeks at a time and often pushing triple digits. At any time of year afternoon thunderstorms can suddenly arise and, after raining just enough to make everything damp and steamy, disappear just as quickly. Then there’s the ever-worrisome hurricane season, which stretches from the start of June through the end of November. One meteorological event most people don’t identify with this city is snowfall. Yet it does happen: since the National Weather Service began keeping record in 1849, New Orleans has experienced 18 “snow events”— defined as when snow clung to the ground. Snow has fallen without sticking about twice as many times. It happens rarely enough, though, that when the white stuff does come down it’s a memorable occasion. Valentine’s Day 1895 was one of those times.

The next day the Picayune published a lengthy account of the snowfall titled “A White City for One Day” that opened with the following description: “An arctic breath swept over the city yesterday. The weather, like a Scandinavian myth, with enormous nostrils, extended all over Dixie, blew a glaciating vapor that congealed and fell as snow. He laid an icy hand on the sunny southland, and dared to grin a hibernal grin in the very face of the gulf of Mexico. Bleak, gelid and frost-bound, the south wears a mantle she seldom dons. . . . . The very winds of the bay of Baffin have played the march a la Mendelssohn and the routed breezes that steal up from the Carib and the Pearl of the Antilles have fled in disorder before the cohorts of the land of the aurora borealis.” Just the slightest bit of purple prose—a common style in 19th-century journalism—but not entirely without reason.

The snow had begun lightly falling before midnight on February 13 and it continued throughout most of the next day, building to strong flurries in the afternoon. Visibility fell to less than a hundred yards, and at the race track spectators couldn’t see the horses or jockeys when they were on the far side. Though temperatures had stayed below freezing for seven days, local weatherman Captain Kerkam had forecast a cold rain for Valentine’s Day. After the snow fell, people harassed Kerkam in the streets; some teased him good-naturedly, but others hurled stronger barbs and even followed him home. Many, however, beheld the landscape of snow-covered buildings, parks, and cemeteries as a serene and wondrous novelty. The Picayune wrote that a particular tableau in the French Quarter “was equally as beautiful, if not more so [than the one in Lafayette Square], down in the Jackson square. Old Hickory stood amidst the snow-covered shrubbery of the place d’Armes, to the sparrows’ accompaniment as they played in the brush. The old cathedral stood gray and melancholy under the snow, casting mural shadows that tinted the snow about with gray.” With the levees and ships all covered with snow and ice, the docks and wharves were closed down the entire length of the river. The passerby lucky enough to wander over to the Mississippi would have “enjoyed a scene of perfect transformation from the ordinary view of the wharf to a picture of perfect loveliness.” Schools let out early that day, flooding the streets with schoolchildren. Many businesses closed early as well. D. H. Holmes, the famed Canal Street department store, let its employee living in other parts of town leave at 2 p.m., while the people who lived within walking distance stayed to keep the store open— not that anyone was shopping.

In fact, the main activity for all ages that day seemed to be snowball fights. In some parts of town no one was safe, regardless of age or gender. According to the Picayune, on “Camp Street, along newspaper row, the newsboys made hot work of snowballing, and no pedestrian ventured a second trip along the banquettes. The urchins, with their wonted activity in all things, plied the snow so thick and fast that stars flew from the eyes of those who stopped the balls, and ears stung from the blow of the well-rounded lumps of cold stuff.” Women were part of the action too: “In the boarding house district of Camp and St. Charles streets the women made ferocious attacks on every passer-by.” The article also mentions snowball fights between organized teams breaking out at places as esteemed as the Cotton Exchange, the Sugar Exchange, the Stock Exchange, City Hall, the Customs House, the Board of Trade, and both the Boston and Pickwick clubs. Not everyone was thrilled with being pelted by snowballs. Again, according to the Picayune, “people unaccustomed to being hit that way raged with anger and wished for a gun, but that only inspired the revelers to a double onslaught with two-fold force and a triple volley of snowballs.” However, as the paper makes clear, most of these victims found the humor in the situation and either laughed as they made their way along the streets or joined in the fun themselves.

More significantly, the storm disrupted the operation of the streetcars. By 1895 electric cars had started making their way onto the streetcar routes around town, but in many cases mule- or horse-drawn wagons still serviced main lines. The heavy snowfall jammed up both types of public transport. Many people waited around at first, for a while assuming that the snow would be a minor inconvenience. They seriously miscalculated, and right after 4 p.m., on the cusp of rush hour, most of the streetcar lines finally shut down. The same folks who had been waiting around now faced the prospect of a long walk home in the cold with the snow still falling and the sun beginning to set. The streetcar companies had men outside overnight shoveling and plowing and doing their best to get the tracks cleared, but not until the next afternoon did most of the routes open again. There were multiple reports of people taking the wheels off of mule-drawn wagons and attaching runners to them, creating makeshift sleighs the likes of which had never been seen in New Orleans.

The snow finally subsided two days later, after the ordeal had been the main story in the Picayune for three days running. Apart from the streetcar stoppages, no serious accidents took place. Some people took hard falls on the sidewalk and many more were seriously inconvenienced but, overall, the town responded to the storm with a mix of curiosity, amusement, and mirth. Though New Orleans would experience its first true blizzard in 1899—during Mardi Gras—the snowfall from the Valentine’s Day storm of 1895, reported at eight to ten inches, has not been matched since.