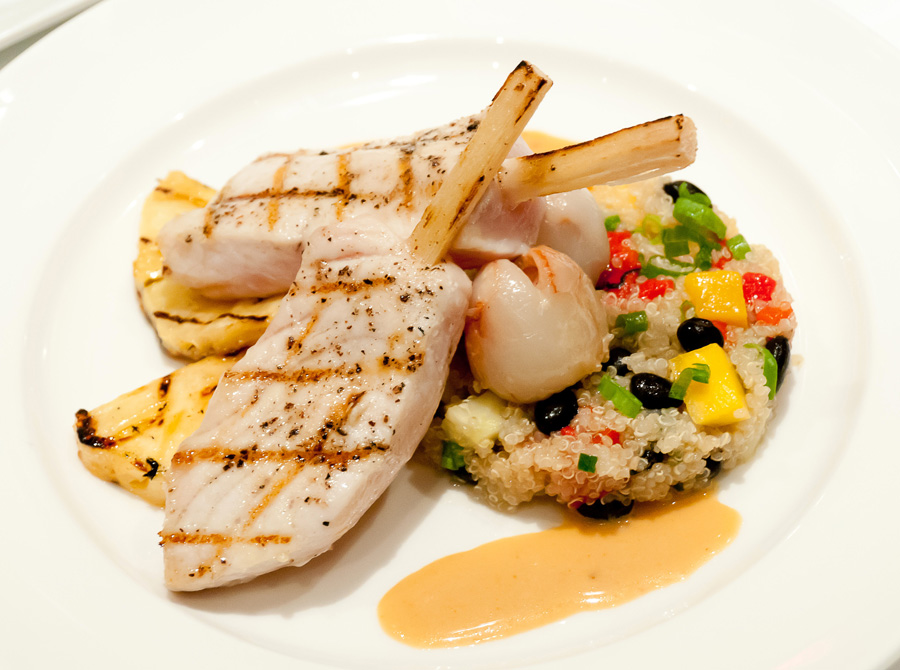 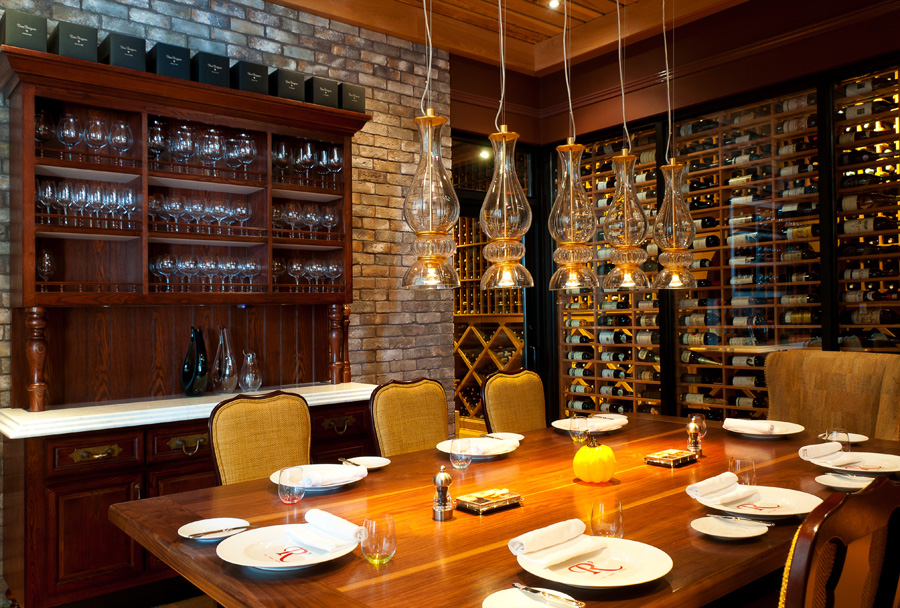 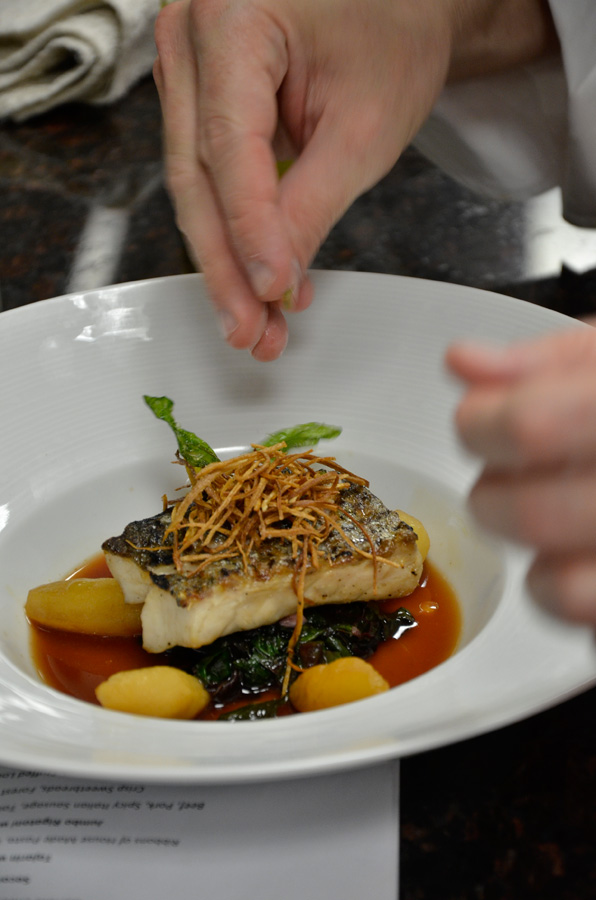 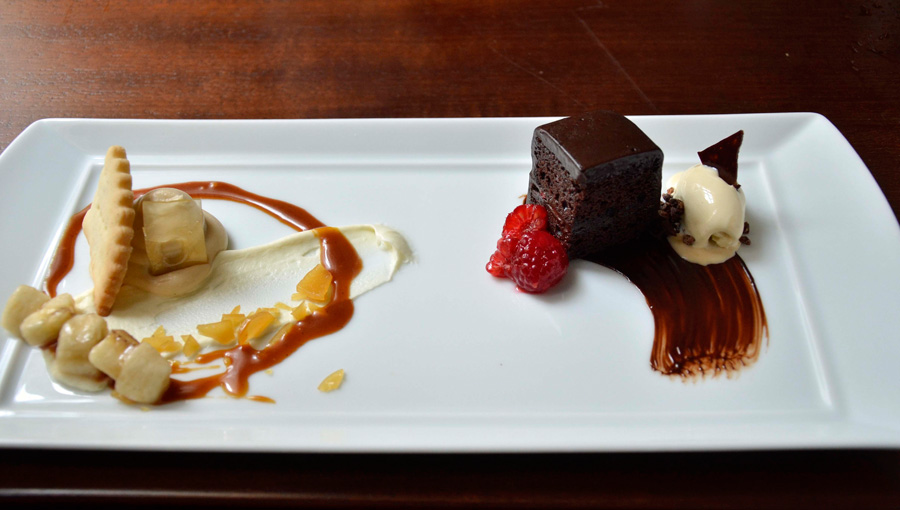 R'evolution at Royal Sonesta (777 Bienville Street, 503.553.2277)
No single restaurant opening has captivated New Orleans in recent years quite like the long-anticipated, splashy launch of Restaurant R'evolution at the Royal Sonesta. And, after more than two years of teasing updates and a painstaking build-out of the restaurant, one thing is clear: it was well worth the wait. The restaurant itself is a showpiece of architecture and design. The attention to detail in the four distinct dining rooms and the glossy, dark barroom is dizzying, from the hand-painted murals in the Storyville Parlor and the gleaming exposition kitchen in the Market Room to the custom-made Bevolo gas lamps in the bar.

Louisiana chef John Folse and former Chicago restaurateur/chef Rick Tramonto have teamed up to give diners a new look at Creole and Cajun cuisine with a menu that touches history, geography, and gastronomy like no other in New Orleans right now. Under the daily watch of chef de cuisine Chris Lusk (an alum of Commander's Palace and more recently Cafe Adelaide at the Loews Hotel), R'evolution's menu turns classic Louisiana dishes and ingredients into an anthropological exploration. Whether it's a humble bowl of gumbo or turtle soup or a stunning, whole fried fish, the restaurant approaches each dish as an opportunity to delve into the nations and traditions that contributed to our native cuisine.


Criollo at Hotel Monteleone (214 Royal Street, 504.681.4444)
Riffing on the city's famously jumbled culinary heritage, Criollo Restaurant at the Hotel Monteleone puts a contemporary spin on classic Creole cuisine. Traditional dishes and regional ingredients are given a modern treatment, but the menu doesn't over-reach into fusion - its boundaries are firmly in the hotel restaurant safety zone. At breakfast, diners will find New Orleans favorites like Lost Bread (a.k.a. French toast) and Eggs Benedict the Louisiana way (with boudin and fried green tomatoes), alongside breakfast standards like the "New Yorker" (a smoked salmon, bagel, cream cheese set-up) and steak and eggs. Standouts on the lunch and dinner menu punch up classic New Orleans dishes and hotel restaurant standards: gumbo decked out with fried okra crouton; a perfect summer shellfish panzanella with a skewer of grilled Gulf shrimp and scallops; swordfish with a side of curried quinoa and slices of grilled pineapple; basic meatloaf and mashed potatoes elevated with a pancetta wrapping and chanterelle mushrooms. The softshell crab "BLT" is a worthy knife-and-fork affair topped with duck "bacon".

The opening of Criollo is one of the last touches in a series of improvements happening at the historic Hotel Monteleone in celebration of its 125th anniversary. Much like the expansion and renovation of the sparkling new Carousel Bar inside the hotel, Criollo is bright, sophisticated and modern, but still maintains the hotel's classic glamour.


SoBou at W French Quarter (316 Chartres Street)
The "cocktail chicks" of Commander's Palace - Ti Martin and Lally Brennan - have expanded their empire into the Vieux Carre with SoBou, a bar/restaurant inside the W French Quarter. (SoBou stands for "South of Bourbon", in case you're wondering.) It's hard not to fall in love with this family's spirited sense of joie de vivre and gracious hospitality, which shines through in the restaurant's cocktail and food menu. SoBou is a hybrid of what the Commander's Palace Family of Restaurants does best: fun dining marked by top-notch craft cocktails and food best described as southern, Cajun and Creole classics meet late-night bar snacks. Modern dining details like the self-serve beer taps and an Enomatic wine system make it an interactive experience well-suited for groups traveling in packs and locals looking for a sophisticated but not-too-serious night out in the French Quarter.


Vacherie at Hotel St. Marie (827 ½ Toulouse Street, 504.207.4532)
For fans of the perpetually-packed BYO local dining scene at EAT new orleans, Vacherie at Hotel St. Marie offers diners a shot at chef Jarred Zeringue's regional comfort food minus the crowds. The menus (breakfast, dinner and bar) showcase Zeringue's signature South Louisiana dishes featuring locally-sourced ingredients from Andouille to crawfish to southern comfort classics like pimento cheese and punchy house-made pickles. This is a restaurant/bar/cafe for people who want lovingly prepared, inventive Louisiana food and aren't afraid to dive into a dish like Breakfast Bread Pudding (a smoked sausage, cheese, Brabant potato and egg casserole) or Boudin Benedict before noon. Vacherie's dinner menu is equally hearty and down home-y with originals like the boudin-stuffed, deep-fried hen and Black Iron Skillet Beef Tenderloin. Don't miss the perfect crisp-tender collard greens or the okra and seafood gumbo, a peppery stew that, unlike stingier restaurant renditions, is thick with crab and gumbo shrimp. (It may very well be one of the best bowls in the city.) The cafe at Vacherie has also added a much-needed lunchtime departure from the standard po-boys and beans-and-rice menu. Fresh salads and sandwiches are identical to those from CBD lunch favorite Between the Bread, Vacherie's sister restaurant.


Tempt at The Saint Hotel (931 Canal Street)
Mark Wyant, owner/developer of the new boutique hotel The Saint, didn't waste any time replacing the short-lived Sweet Olive, which Coquette chef Mike Stoltzfus closed in April within months of its opening. The new restaurant, re-named Tempt, is now run by executive chef Marcus Woodham, who has worked at Patois, TrüBurger and Ste. Marie. The dining room hasn't changed - it is an intriguing model of chic, clean modern design, which is fitting for Woodham's polished, contemporary southern food. The dinner menu at Tempt is short and sweet, to the point of appearing minimalist, but Woodham's attention to the flourishes turn simple dishes into sublime: roast chicken is glazed in the classic southern sweet tea; an unusual artichoke and preserved lemon vinaigrette appears on a daily fish dish; shrimp-enriched veloute and roasted corn grits elevate the otherwise humble shrimp and grits. Hotel restaurants are notoriously finicky endeavors. The mandate to run room service and provide breakfast to hotel guests can be tough on a kitchen trying to create a modern New Orleans dining destination that lures both local diners and discerning travelers. Tempt deftly walks the line of casual fine dining with upscale comfort food, and the talented Woodham appears to be up to the task.


New Orleans Seafood & Hamburger Co. (541 Decatur Street, 504.309.7902)
Note the subtle name change in this popular local chain operation. Seafood (namely oysters) takes a front seat in the New Orleans Seafood & Hamburger Co.'s first table service restaurant, which opened in the French Quarter in April. Although the restaurant's award-winning burgers are still featured prominently on the menu, the restaurant is hoping to grab visitors with its oyster bar and new menu items like fried oysters topped with bacon and blue cheese, or Rockefeller-style, or the curiously weird red beans and Creole mustard. The two-story location on Decatur Street was once the home of Carmelo Ristorante, a beloved local Italian eatery now relocated to Mandeville, but the space seems more in tune with its recent incarnations as restaurants geared for visitors. The wrap-around upstairs balcony overlooking Decatur and Toulouse may not see much use in the dog days of summer unless you're gripping one of the restaurant's frozen schooners of draft beer, but it is a prime spot for casual night dining and people-watching.


Cafe Soule (720 St. Louis St., 504.403.4636)
Despite New Orleans' deep, historic ties to France, outside of a few bistros in neighborhoods beyond the French Quarter, the city is surprisingly bereft of straightforward French restaurants. Cafe Soule is a refreshing new addition to the scene, offering French Quarter citizens and travelers a menu reminiscent of a Parisian cafe. Crepes, the signature dish at Cafe Soule, are made to order from a menu of classic fillings, including Nutella, fresh sliced strawberries, cheese, or shrimp and spinach. The menu takes liberties in its French-ness (case in point: the Champignons et Fromage Burger, or mushroom cheeseburger in the local parlance), but the restaurant itself conjures images of idle afternoons at a Left Bank cafe.

Located across the street from Antoine's, Cafe Soule has a few connections to the historic restaurant, as well. Executive chef Ernest Jack, Jr. worked the kitchen at Antoine's under his father, Ernest Jack, Sr., who has worked at the restaurant for 32 years. Cafe Soule is also c-owned by Charlie Daroca, chief financial officer of Antoine's.