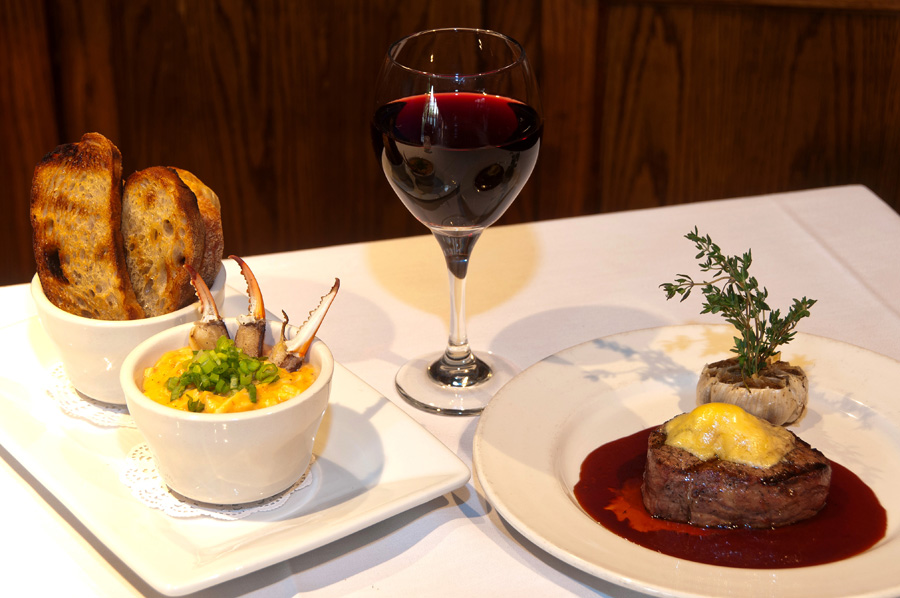 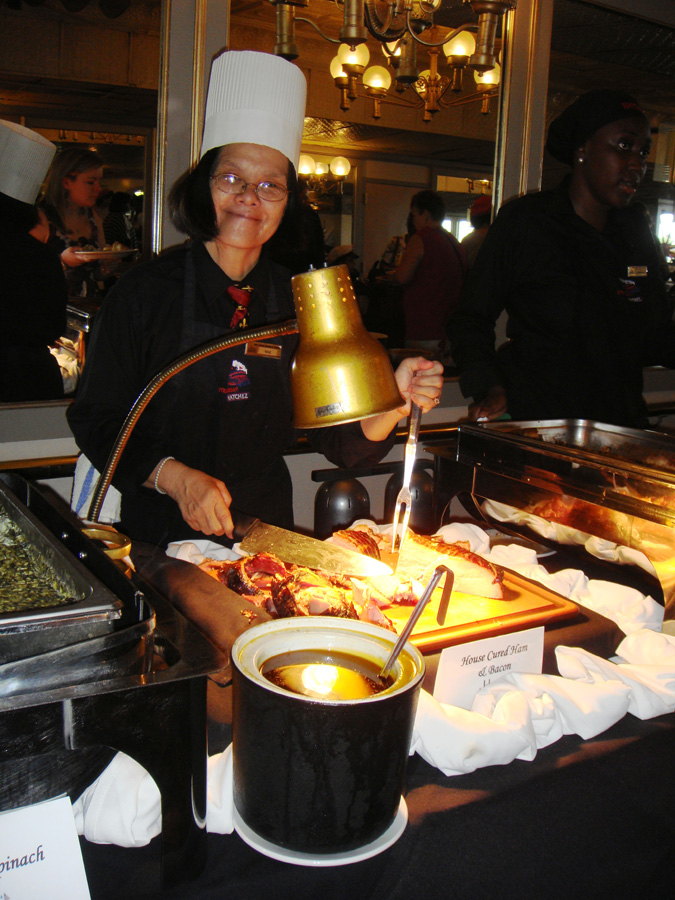 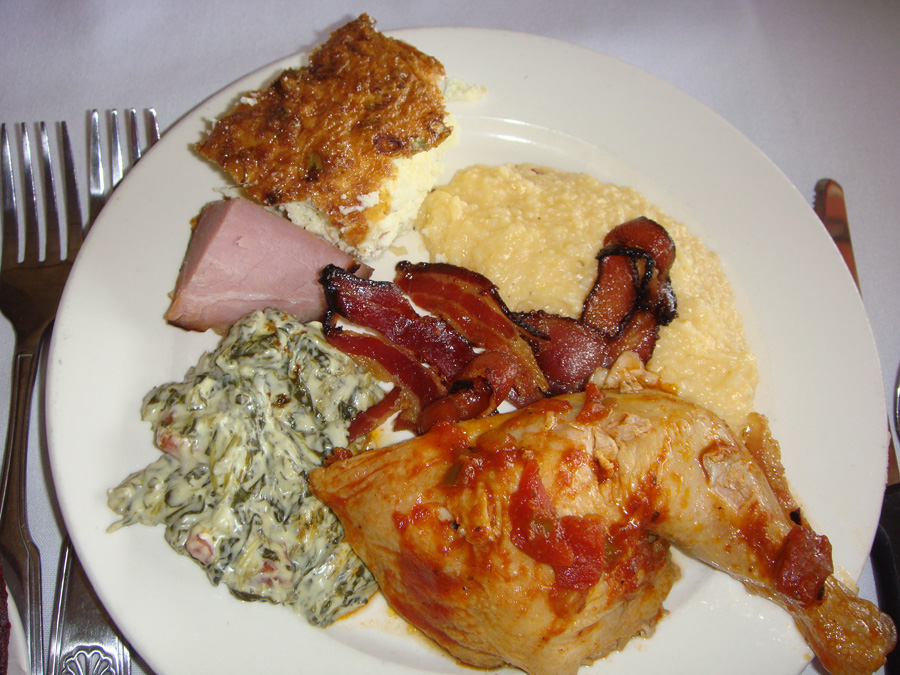 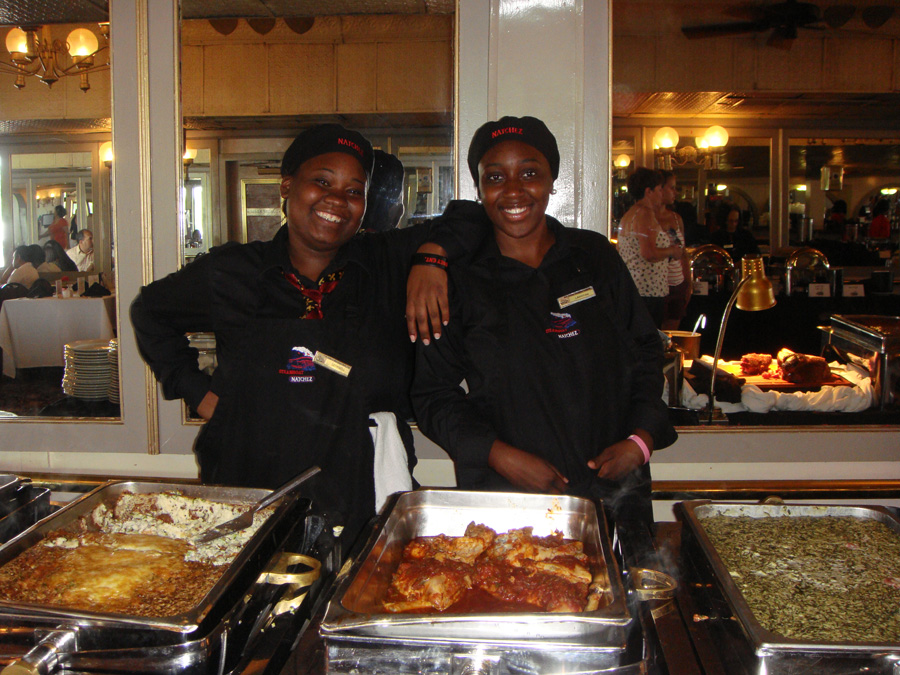 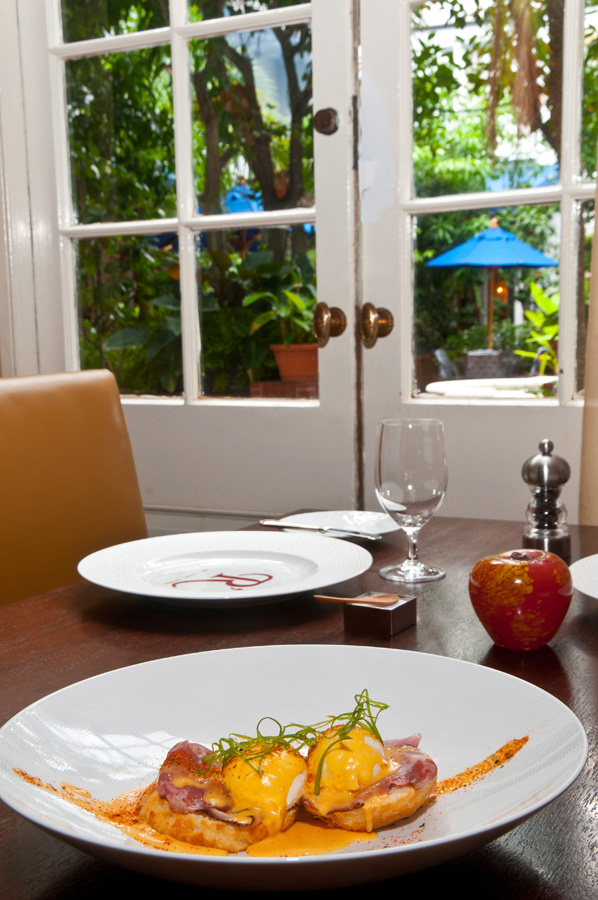 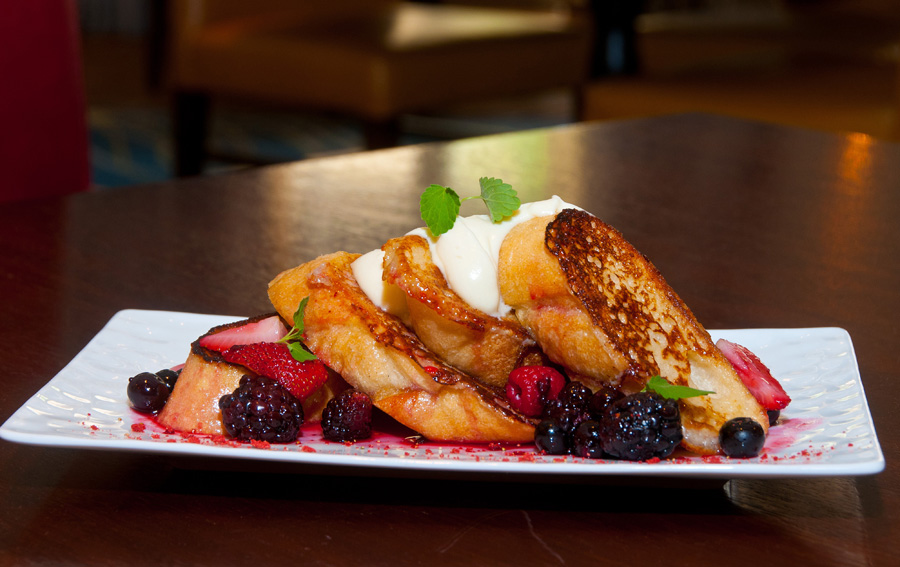 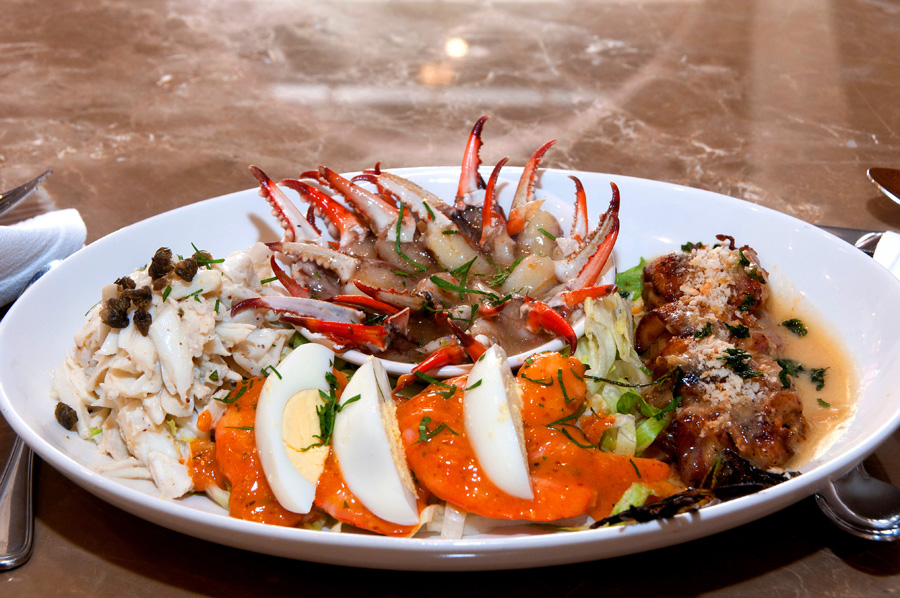 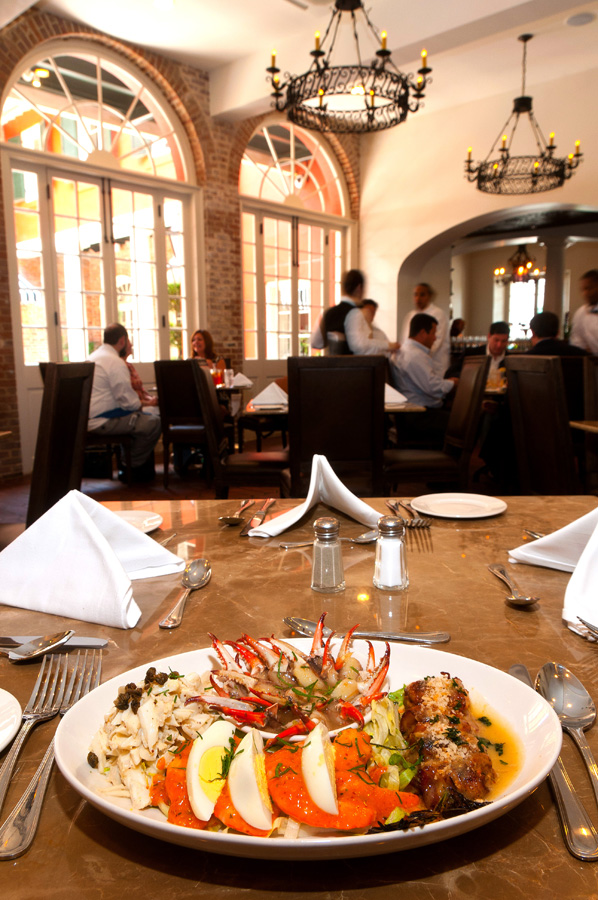 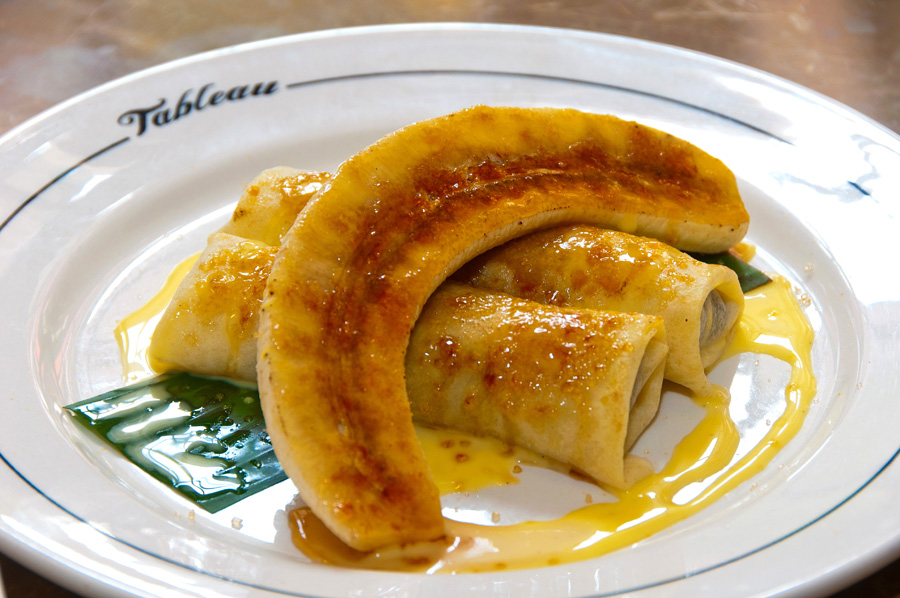 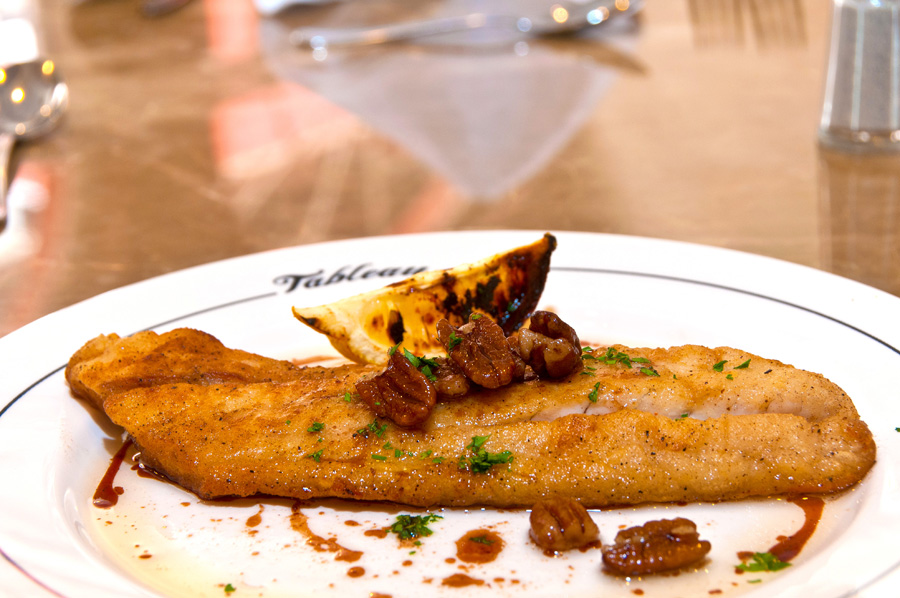 These days it seems as though the New Orleans food scene is changing more frequently than Molly Cyrus changes her hairstyle! Exciting new eateries appear to pop up virtually every day, chefs are shuffling from restaurant to restaurant and long-time favorites are expanding into unfamiliar territories. That being said, keeping up with this ongoing culinary evolution is challenging to say the least. We've orbited the Quarter and just beyond to bring you the latest endeavors in this one-of-a-kind New Orleans restaurant world.

NEW TO THE SCENE:

Tableau (616 St. Peter St.)
From the masterminds behind Dickie Brennan's Steakhouse, Palace Cafe and Bourbon House, comes this highly anticipated, grand restaurant located adjacent to Le Petit Theatre in the heart of the French Quarter. Chef Ben Thibodeaux, a native of Lafayette and 10-year veteran of the Dickie Brennan dining dynasty, has crafted a smart menu with an emphasis on classic French cuisine, with a modern twist. At Chef Thibodeaux's deft hand, local favorites such as Oysters en Brochette is lightened up with the use of Panko breadcrumbs, and a delicate roasted garlic beurre blanc. Additionally, the ethereal Truffled Crab Fingers float in a simply divine vinaigrette with a wisp of white truffles. The ideal starter is the Grand Royale, a delicious combo of the two before mentioned dishes, along side Crabmeat Ravigote and a tangy Shrimp Remoulade. Chef also creates a Crepe du Jour, a fine starter in its own right (we quickly lapped up a succulent crawfish and corn version.) You'll find a fine selection of traditional NOLA soups that offer a unique spin including Seafood Gumbo with the interesting addition of eggplant and Creole French Onion Soup spiked with local beer. For something cooler, don't miss the Asparagus & Seafood Salad, an artful melding of chilled asparagus topped with jumbo lump crabmeat ravigote, boiled shrimp, sliced tomato and a refined lemon-tarragon Dijon vinaigrette. The Gulf Fish (available in full and demi portions) is lightly battered and cooked to perfection with your choice of Amandine, Muenier or Praline Sauce. One of the most outstanding dishes is also one that many diners may overlook - the Chicken Tableau is an excellent example of a chef who knows his way around the bird. Succulent herb roasted chicken breast was juxtaposed with a crispy, moist boneless thigh, served with the classic combo of potatoes tossed with ham, garlic, peas and Creole spices, then topped with a creamy Hollandaise sauce. Be SURE to save room for dessert! Pastry chef extraordinaire Stephanie Bernard skillfully crafts elegantly presented and scrumptious desserts including a mouth-watering Chocolate Banana Crepe filled with pecan chocolate cream topped with bruleed bananas and banana anglaise, a heavenly Angel Cream Crepe with dolce de leche filling, fresh berries and Chantilly cream, and Tart A La Bouille, a divine Cajun sweet dough with a vanilla custard center, drizzled with Old New Orleans Spiced Rum caramel Sauce. Chocolate lovers will drool over the "Hot Chocolate Pot de Crème," infused with just the right touch of cayenne pepper, topped with housemade marshmallow fluff. The decor is warm, stylish and understated, allowing the original architecture of the historic building to shine. A magnificent wrap around balcony, which overlooks Jackson Square, is where I foresee spending many evenings sipping one of their tasty signature cocktails!

Galatoire's 33 Bar & Steak (215 Bourbon St.)
The name Galatoire's is synonymous with fine dining in New Orleans. The legendary, Bourbon Street restaurant has been beloved by locals and visitors for more than a century (not much has changed, namely the menu, over the years.) So, when the current owners announced the purchase of the adjacent building with plans to open a new bar and restaurant, it quickly became one of the most talked about expansions in recent years. Galatoire's 33, a nod to the former address of the historic structure, opened this spring much to the delight of many. The rich decor of the newly restored building feels like a step back in time. Exposed dark wooden beams, opulent crystal chandeliers, marble top tables and masculine leather chairs perfectly accent the elegant, grandiose bar. The equally lavish second story provides over 2,000 square feet of private parties and events space. Sophisticated, yet approachable, the traditional steakhouse is overseen by Galatoire's Executive Chef Michael Sichel. The classic steakhouse menu offers USDA prime cuts including ribeye, T-Bone, New York strip and certified Black Angus filets. A house-smoked pork chop, a veal rib chop, beef Wellington and Lobster Thermador round out the signature entrees. Side dishes that include crabmeat au gratin, cauliflower au gratin, hash browns, brown butter mushrooms, and Brussels sprouts, among others, are served family-style. With such a spectacular bar, the cocktail scene here has quickly taken off with the "who's who" of New Orleans regularly sipping classic, hand-crafted cocktails such as the Sazarac, Brandy Milk Punch or Old Fashioned. Enjoy live music with local renowned pianist A.J. Loria every Friday and Saturday nights starting at 9pm.

Mariza (2900 Chartres St.)
The dynamic duo of Executive Chef Ian Schnoebelen and General Manager Laurie Casebonne of local fav Iris has done it again! Located in the trendy Bywater neighborhood, which is in the midst of a restaurant boom and just steps away from the Vieux Carre, Mariza threw open its doors earlier this year to terrific reviews. Schnoebelen, a Best New Chef award winner from Food & Wine Magazine, has ventured into Italian-inspired cuisine at this new casual eatery. The raw bar showcases seafood at its finest with plump Louisiana Oysters on the half shell, Yellowfin Tuna Carpaccio with arugula, olives and Parmesan cheese, and a delightful Red Snapper Crudo with savory fennel pesto and tomato olive oil. Ideal for sharing are the Salumi of the day plate or the Cheese of the day plate with dried fruits and nuts. Chef Schnoebelen's marriage of cured meats with cool salad is sublime and all are worth checking out. The Salami & Gorgonzola Salad with beet chips is truly a work of art, as is the equally delicious Bresoala and arugula with olives, lemon and Parmesan. Not to be outdone are the tangy Goat Ricota Bruschetta with kale and balsamico and the Burrata Costini and Tomatoes with basil pesto, shoots and sprouts. Stand out, housemade pastas include Potato Gnocchi with kale, spring onions and ricotta, Short Ribs Rigatoni with wild mushrooms and olive mascarpone and the Duck Ragout Papardelle with perfectly smoked duck breast and liver mousse. Signature pizzas include Fresh Mozzarella with fennel and arugula salad, Lardo with white sauce and pickled peppers and Felino Salame with red onion and olive. Very reasonably priced entree selections such as Duck Leg Confit with local veggies, grilled beets, proscuitto and mushroom vinaigrette and the succulent Braised Lamb Belly with creamy polenta and tomato will have you begging for more! Top off your dining experience with Strawberry Panna Cotta or Chocolate Terrine with sea salt and candied blood orange. The menu boasts a fine selection of vegetarian and gluten free options as well. Mariza also offers a nice, affordable Italian-driven wine list, as well as a unique collection of "After Dinner Sippers."

Bombay Club
The Bombay Club, the sophisticated, award-winning British-inspired martini bar and restaurant nestled just steps off of bustling Bourbon Street, recently welcomed the return of Executive Chef Nick Gile. The highly touted chef spent about eight years leading the kitchen before he took a few years off to "spread his wings" and travel. "I'm back, refreshed and ready to infuse some new things into the Bombay Club," he said. A native of Portland, ME, Nick originally came to New Orleans knowing that the famous food city would afford him the chance to expand his repertoire. He worked with some of the city's most notable chefs including Andrea Apuzzo and the late Jamie Shannon, and continued grow while cultivating his own style of cooking. It was during this time that he began a friendship with Richard Fiske, the owner of the Bombay Club. Although Nick left New Orleans in 1998, he and Richard remained close friends and Richard soon began plotting to lure Nick back to New Orleans. In early 2002 he was successful, and between 2002 and 2009 Nick and The Bombay Club received numerous accolades including Best Restaurant Bar by Sante Magazine. In late 2009 Nick left the Crescent City a second time to focus on expanding his culinary knowledge through travels to Asia, Europe, and the Caribbean, as well as South and Central America. Once again, Nick returned to his adopted city and lucky for us, his talent for blending fresh local ingredients and flavors can be experienced nightly at The Bombay Club. His renewed passion for sausages and cured meats is evident on the new bar menu with specialty items such as house-made charcuterie and duck pate, However, even with his newfound respect for all things international, the Bombay Club's menu will retain its distinctive English flair with tempting dishes like his savory Braised Steak and English Stout Pie and the ever-popular Bombay Filet topped with English Stilton cheese and Red Wine Bordelaise. Also, new at The Bombay Club is a nightly Happy Hour with drinks specials and $1 sliders.

Restaurant R'evolution (777 Bienville St.)
Since its opening in 2012, Restaurant R'evolution, the brainchild of nationally acclaimed chefs Rick Tramonto and Louisiana native John Folse, has been recognized time and time again, including being named one of the 70 Best New Restaurants in the World by Conde Nast Traveler and its most recent honor as one of Wine Enthusiast's 100 Best Wine Restaurants in America. And, now with the addition of R'Evolution's NEW Jazz Brunch, Sundays in the Vieux Carre are tastier than ever! Each Sunday enjoy the jazzy sound of the Playhouse Strolling Jazz Trio as you indulge in a creative brunch menu featuring modern, imaginative reinterpretations of classic Cajun and Creole cuisine. Chef de Cuisine Chris Lusk has created a magical menu with tempting starters such as: Corn and Crab Cappuccino with Black Truffle and Popcorn, Beer Battered Crab Beignets with four Remoulades, Strawberry Pain Perdu with Mixed Berries and Whipped Cream and Cajun Fried Oyster Salad with crispy Bacon and Blue Cheese dressing. Palate pleasing entree selections such as Eggs a la Crème with Crawfish, Smoked Paprika and Cajun Caviar, Short Rib Grillades and Gravy Spanish Style with Creole Tomato Grits and fried Oregano, Sheep's Milk Ricotta Gnocchi with Lobster, Vanilla, Tarragon and Lobster Roe, Paneed Veal Chop with warm Crabmeat Salad and Truffle Aioli, and 4-Bone Rack of Lamb are sure to keep you coming back week after week! Served Sundays from 10:30am until 2pm, this NOLA-style brunch would not be complete without lively libations. Don't miss these refreshing and delectable signature brunch cocktails: Sparkling Cucumber Fresco, Sparkling Blackberry Smash, Sparkling Cocktail R'Evolution and Sparkling Punch.

Steamboat Natchez
Take a romantic cruise along the might Mississippi River and enjoy the Steamboat Natchez's new Sunday Jazz Brunch! This uniquely New Orleans dining experience will take off twice each Sunday at 11:30am and 2:30pm from the riverfront near JAX Brewery. Tap your toes to traditional Jazz music by Duke Heitger's Steamboat Stompers, as you chow down on a scrumptious, classic Creole and Cajun-inspired brunch spread. Delectable dishes include Chicken Sauce Piquant, Creamed Spinach, House Cured Ham, Garden Veggie and Fontina Cheese Frittata, Creole Shrimp and Pasta Salad, Applewood Smoked Bacon, Southern Style Grits, Fresh Fruit, Natchez Bread Pudding, Yogurt Cups and Red Velvet Hot Cakes. In a city where Sunday mornings are a social time to relish in the merrymaking of the night prior, the Steamboat Natchez Sunday Jazz Brunch will welcome locals and visitors alike to pass a good time aboard the boat.

These new eateries are on the horizon" Stay tuned for details to come!