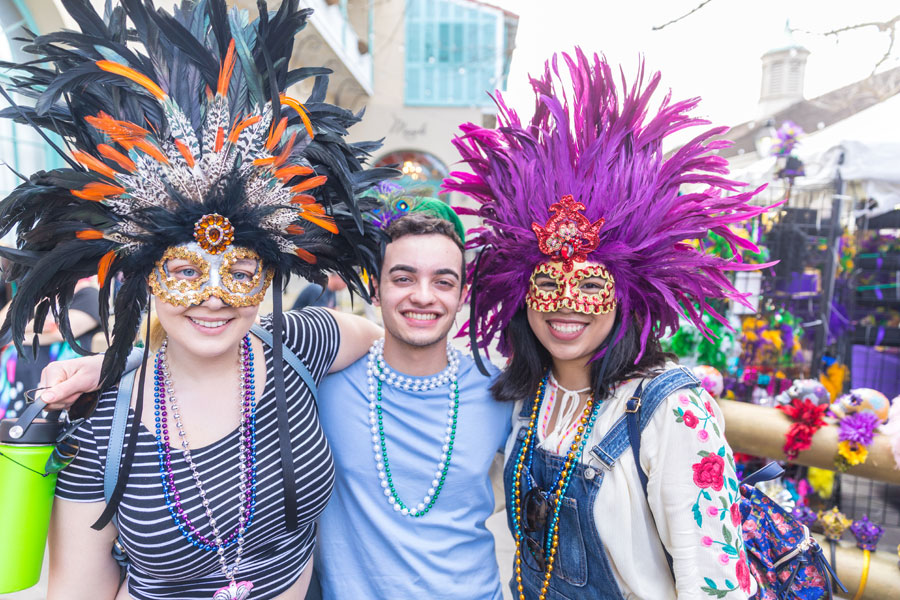 On Fat Tuesday, people wear masks to go incognito and unleash their alter ego. The practice of disguising one's true identity behind a mask dates back to the European celebration of Carnival interlaced with customs of pagan Rome. In the beginning, donning masks during Mardi Gras allowed wearers to escape societal and class constraints. Masked carnival goers were free to be whomever they wanted to be and mingle with whatever class they desired. On Fat Tuesday, wearing masks adds to the enigma and debauchery of celebrations throughout the French Quarter.

It’s never too late to pull your costume together for Mardi Gras, and your persona starts with the perfect mask. The Friday before Mardi Gras through Lundi Gras, February 21st through the 24th , be sure to visit the Mardi Gras Market in Dutch Alley. Here you will find the most important part of every costume, a mask! This event draws mask makers from around the country to vend their creations. The event includes four days of live music, food vendors, and revelry. Try on a few and see what suits your fancy! You will certainly be glad you did when you get to experience the euphoria of setting your alter ego free on Mardi Gras Day.

On Sunday, March 15, be sure to take in the St. Joseph’s Day Celebration in the Farmer’s Market. Festivities include an on-site altar to honor St. Joseph assembled by St. Augustine Church, a Mardi Gras Indian presentation on St. Joseph’s Day traditions, and a second-line parade.

The tradition of the St. Joseph’s Day altar is observed with fervor in New Orleans. The tradition began in the late 1800s when Sicilian immigrants settled in New Orleans. St. Joseph’s Day is observed here on March 19 to a much larger degree than it is elsewhere, even Sicily. Every Catholic high school and church in New Orleans displays an elaborate St. Joseph’s Day altar to honor their patron saint. The lush and bountiful altars traditionally have three sections representing the Holy Trinity, with St. Joseph’s statue at the center. The beautiful altars are decorated by devout parishioners with statues, flowers, photos of loved ones, candles and food, including citrus, fanciful shellfish shaped breads, dozens of varieties of cookies, fava beans, and maybe even a lamb cake! You will probably be treated to a bowl of meatless Pasta Milanese topped with breadcrumbs, representing Joseph’s carpentry sawdust. Swing by Jackson Square and view the abundant altar at St. Louis Cathedral. My favorite St. Joseph’s Day food is the fig-filled anise cuccidati cookie, which is also traditionally made at Christmas. At the end of St. Joseph’s Day, the altar is symbolically broken in the Tupa Tupa ceremony by costumed children pretending to look for shelter and finding sustenance at the altar. The food and donations are distributed to the public and to charity. You will probably also get handed a fava bean for luck, as this legume sustained the Sicilians through the famine, as well as a bag of cookies to take home. And if you manage to steal a lemon from the altar it means you will get married or have a baby by the next St. Joseph’s Day… so be careful!

The annual Italian-American St. Joseph’s Day parade in the French Quarter is a local favorite. The evening of Saturday, March 21, shortly after 6 pm, there will be food, wine, and Italian music on the streets of the French Quarter and lots of inebriated guys in black tuxedos reveling into the night. They enjoy giving silk flowers, lucky fava beans, kisses, and pearly white, red or green beads to enthusiastic bystanders as they dance and sing the hours away, stopping at various bars along the way. Join in the rolling party and celebrate along with them; on this evening we are all Italian!