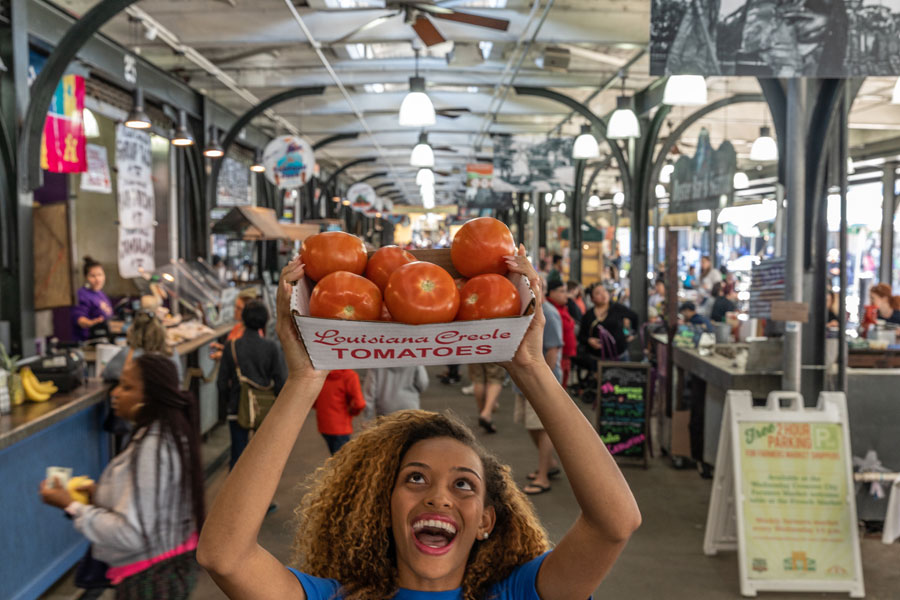 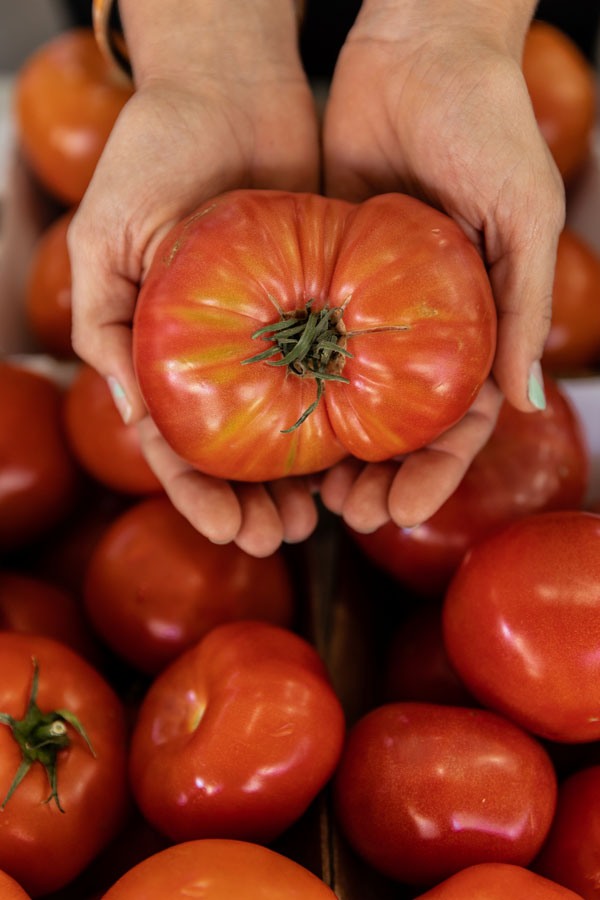 In New Orleans, a rite of summer is our first taste of the coveted and meaty Creole tomato. The Creole tomato was originally imported from the West Indies and thrives in southern Louisiana's rich soil and subtropical climate. When the farmers in nearby St. Bernard and Plaquemines parishes first called their tomatoes Creole, it meant they were grown in the rich alluvial soil of the area and vine ripened because they did not have to be transported long distances to market. This gave them a rich flavor. It did not indicate a particular cultivar, but in 1969 Louisiana State University released a tomato cultivar named “Creole” that is suitable for our climate and has become the tomato we know and love.

Founded as a Native American trading post predating European colonization, the French Market is the oldest of its kind in the United States. While the Market has existed on the same site since 1791, each new decade and governing flag has brought dramatic changes and helped to secure its special place in the hearts of the people of New Orleans. The original Vegetable Market or Halle des Légumes was the main produce stand for the Quarter from 1882 to the 1930s. Designed by Joseph Pilié, it was said in 1926 that “for fruits and vegetables, the Vegetable Market appears to be unrivalled.”

Thus, it is not a surprise that the French Market hosts a celebration of our favorite fruit. Yes, it is scientifically categorized as a fruit and no, we don’t make daiquiris with them! However, I can’t wait to savor the Bloody Mary Market in Dutch Alley with many variations on the popular cocktail. On the weekend of June 8th and 9th, tomato lovers will rejoice as we honor Louisiana's produce, farmers and our unique cuisine of which the Creole tomato is a star. The free Creole Tomato Festival is beloved for its quirky traditions such as life-sized tomatoes strolling the French Market, Dutch Alley, and the New Orleans Jazz Museum at the Old U.S. Mint as they hand out tomato-shaped fans. It’s fun but a bit messy to compete in the tomato eating contests-- no hands! Watch the auctioning off of the first tomatoes of the season to local chefs and then sit back in the shade of the French Market and enjoy sampling dishes from the culinary stage highlighting Creole tomato cooking demonstrations. There is live music on two stages, children’s activities, and a culinary stage highlighting Creole tomato cooking demonstrations in the French Market.

Food booths compete for most creative, most traditional, tastiest and healthiest dishes. Indulge in the delicious creations prepared by chefs from the area, and shop for fresh local produce and cookbooks. They offer Creole tomato favorites like crispy fried green tomatoes with remoulade sauce, Creole tomato with shrimp salad, stuffed shrimp with grilled Creole tomato over jasmine rice, Creole tomato basil crepes, Creole tomato gelato, Creole tomato crawfish pies, blooming onion on a bed of Creole tomato, and more. Succulent tomatoes are essential in many of New Orleans’ popular dishes. Chefs and diners love their versatility and unique flavor. If you can’t get your fill at the festival, look for the many French Quarter restaurants offering special dinners in June starring our popular tomato, a taste sensation not to be missed!