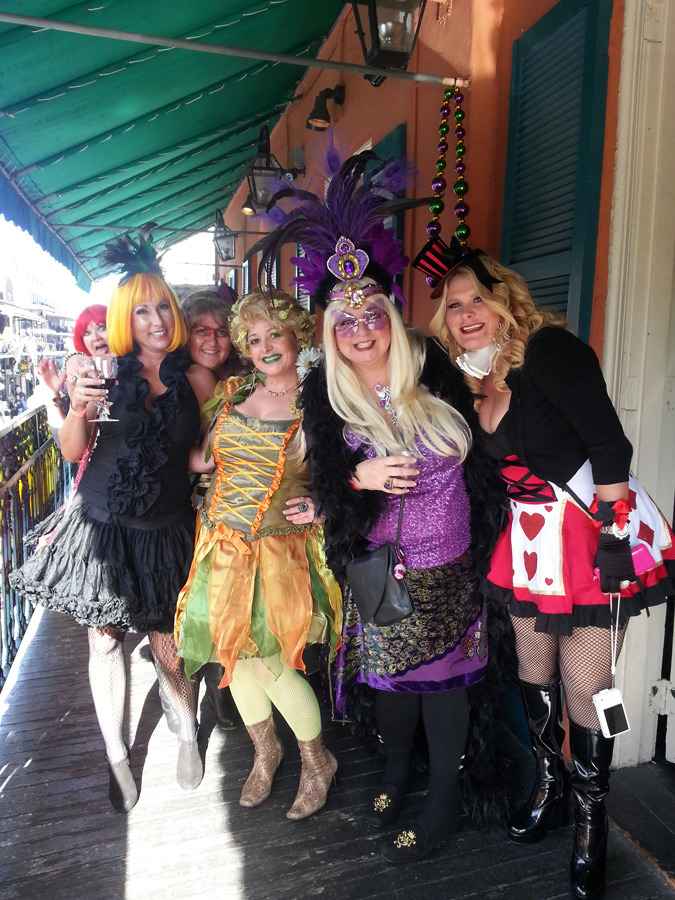 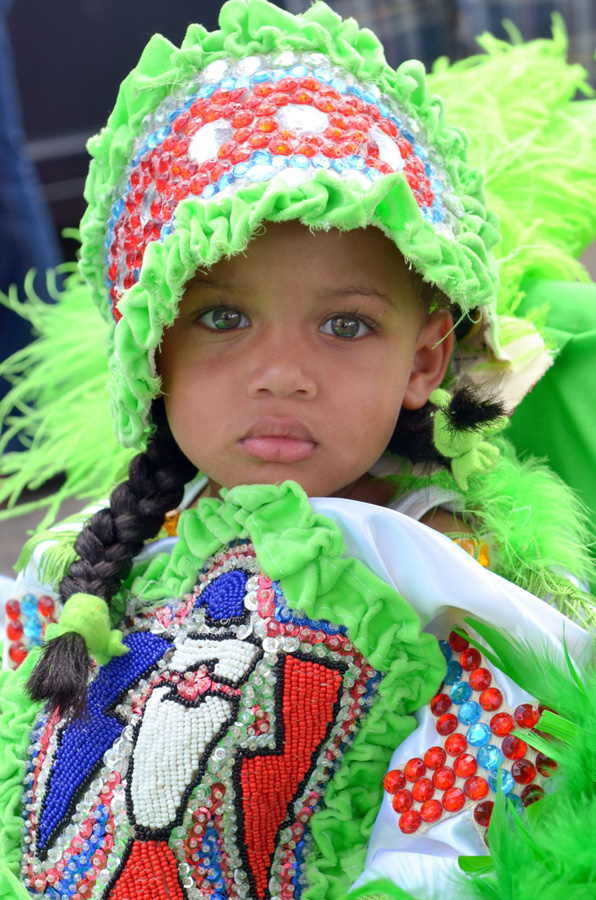 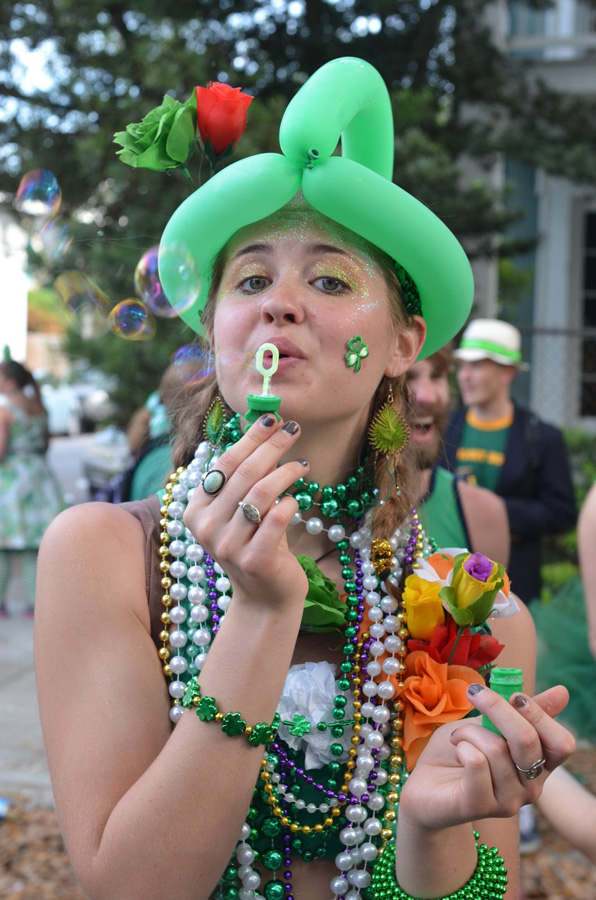 The "Greatest Show on Earth," otherwise known as Mardi Gras will be celebrated early this year on February 14th. The biggest free party thrown in North America always falls 46 days before Easter and is the city's most popular attraction. Visitors and locals alike love the party atmosphere, the crowds, costumed revelers, and the camaraderie.

The Mardi Gras parades are organized by Carnival Krewes that begin parading at least two weeks before Fat Tuesday. The float riders toss throws to the crowd who often yell, "Throw me something, Mister!" The most common throws are strings of colorful plastic beads, aluminum or wooden doubloons usually impressed with their krewe logos, decorated plastic throw cups, and small inexpensive toys. Major krewes follow the same parade schedule and route each year, mostly along St. Charles Avenue and Canal Street on the upriver side of the French Quarter. The traditional colors of Mardi Gras are purple for justice, green for faith, and gold for power. Errol Laborde shows the above-mentioned meanings of the Mardi Gras colors to be false. In his book "Krewe: The Early New Orleans Carnival: Comus to Zulu," he gives a much simpler origin, having to do primarily with looking good. Yes, New Orleanians really think that purple, green, and gold look fabulous together!

While the large motorized floats of the big parades have been prohibited since the early 1970s from going down the Quarter's narrow streets due to size restrictions, you should take a short jaunt to Canal Street to see the big parades of the grandest krewes. However, there are many wonderful walking krewes that may have mule or man powered small floats to be found in the Quarter. There are numerous parties, costume contests, small marching krewes, parading jazz bands, and groups of revelers converging on the streets of the French Quarter on Mardi Gras day, known as "Fat Tuesday."

The first Mardi Gras parade to roll through the French Quarter every year is the decadent Krewe du Vieux, which is definitely adult oriented and extremely satirical. It starts at Elysian Fields at Chartres at 6:30 p.m. on January 31st. They carry on old traditions such as hand-made, human or mule-drawn floats and showcase twenty of New Orleans most incredible brass bands. Hand-made unique and often lewd throws, costumes, themes, and floats make it the only parade where it is inappropriate to bring children yet it provides hilarious adult entertainment and is highly recommended.

Before the big day of Carnival, one of the marching krewes to catch if you love wine is the Krewe of Cork, founded in 2000. This Bacchanalian group strolls down Royal and Bourbon Streets on February 6th celebrating wine, food, and fun. They begin on Royal Street between St. Peter and Toulouse at 3 p.m. The 400 members parade through the French Quarter donning wine and grape related costumes. There will be wine, of course, a brass band, and more wine.

On February 13th be sure to catch the annual "Greasing of the Poles" in front of the Royal Sonesta Hotel at 300 Bourbon Street. This long standing tradition of greasing the support poles as a means to deter over-zealous revelers from shimmying up to the coveted balcony space above. This popular Mardi Gras event has evolved into one of the most unique carnival displays of the season and is a popular must-see for locals and visitors. The festivities begin at 10 a.m. in front of the Royal Sonesta Hotel's main entrance with a brass band to get things rolling in the Carnival spirit. The King and Queen of Zulu are in attendance as well as local dignitaries and special guests. The actual Greasing is a competitive event where four celebrity greasers apply Vaseline to the wrought iron poles and creatively vie for top votes from our panel of judges. It's a truly "only in New Orleans" experience!

On Friday, February 13th through Monday, February 16th from 10a.m. to 6p.m., get ready for the revelry by shopping at the Mask Market in the French Market's Dutch Alley at the intersection of Decatur and Dumaine Streets. Here you will find an amazing selection of handmade masks by artisans from around the country. It's the perfect place to "get your Mardi Gras on!"

On February 13th at 1:30 p.m., The Divine Protectors of Endangered Pleasures begin their annual Promenade on Bourbon and Royal Streets in divinely beaded costumes. The DIVAs, an all female group, their escorts, the Elvi, and their brass band, The Riverside Ramblers provide a spirited and colorful show for all the citizens of their Protectorate. The focal point, or focal points in this case, are the elaborately crafted beaded bustiers for which the DIVAs are known. The bustier, which must be hand- made, begged, borrowed or stolen, is a prerequisite for membership in the Divine Protectors. The DIVAs march, dance, careen, stumble and tap dance their way through a parade route starting at Arnaud's on Bourbon Street, stop at Pat O'Brien's Patio Bar, and return to Arnaud's by way of Royal Street. They can also be seen prior to and after the Promenade on the Bourbon Street Balcony at Arnaud's restaurant. See if you can catch one of the coveted DIVA beads from the balcony!

Finally, Fat Tuesday arrives and you should be ready for a fun-filled day of Bacchanalian revelry! Don a costume to become a part of the party rather than just a spectator! One of the first marching krewes you will see coming down Canal Street and rolling into the French Quarter around 9 a.m. are Pete Fountain's Half-Fast Marching Club with Pete Fountain and other local jazz musicians playing through most of the parade. After a brief interlude on Canal Street, the Club enters the French Quarter at Bourbon Street and wanders through the French Quarter eventually ending at the Riverfront Hilton in the early afternoon.

Following Pete Fountain's Club, Mondo Kayo Social and Marching Club triumphantly dances down Canal Street with the color and joy of Caribbean Carnival, then continue on to Jackson Square. Finally they wind their way over to Chartres at Frenchmen Street where they dance and play until dark.

The Zulu Social Aid & Pleasure Club is the first big parade to march down Canal Street on Fat Tuesday. Founded in 1916, Zulu is New Orleans' largest predominantly African American carnival organization known for its blackfaced krewe members wearing grass skirts and its unique throw of hand-painted coconuts called the "Golden Nugget" to the crowd. In the early 1900s, other parading organizations threw fancy glass necklaces that were handmade and expensive. The working men of Zulu could not afford expensive treats, but still wanted to give a special prize to lucky parade goers. The men decided to purchase coconuts from the French Market because they were unique and inexpensive. Painted and adorned coconuts became popular with the club starting in the late 1940s. If you catch a coconut, count yourself extremely lucky!

After Zulu, Rex stages one of the city's most celebrated parades on Mardi Gras Day. Rex is Latin for "King", and Rex reigns as "The King of Carnival" . Founded in 1872, Rex has held more parades in New Orleans than any other organization. Its official song is "If Ever I Cease to Love", a quirky tune from the 1870s musical "Bluebeard". Rex still assembles floats using techniques that have spanned generations, entirely by hand. The theme for each year's parade is decided more than a year in advance, and as soon as the parade is over on Mardi Gras Day, float artists begin work on the next year's parade. It takes thousands of man-hours to create an entirely new parade, and it is for this reason, as well as the organization's commitment to its history and traditions, that many consider the Rex parade to be the highlight and most beautiful sight of New Orleans carnival. Rex's theme this year honors the bicentennial of the Battle of New Orleans and other battles and their heroes, is "Wars That Shaped Early America."

Just when your head stops spinning from Mardi Gras, don some green clothing and claim to be Irish because St. Patrick's Day is celebrated in the French Quarter in the form of more parades! It's always the perfect season for another celebration ... after all, it's New Orleans, and we love to parade and party in the streets! Men and women in walking groups from various Irish marching clubs in the city dress in tuxedoes, kilts, and costumes of green to give out white and green flowers and beads, drink green beer, Guinness Stout, or Jameson Irish Whiskey and to kiss lucky parade goers along the route to the music of bagpipers and drummers. The parade's most famous throws are cabbages, carrots, onions, potatoes...everything needed for a hearty Irish Stew" and MoonPies!

On March 13th, Molly's at the Market Irish Parade rolls at 6 p.m. from 1107 Decatur Street. Arrive early and imbibe and mingle with the many marching groups in kilts or tuxedoes and riders in carriages. Then join in the pub-crawl through the French Quarter that stops at several Irish watering holes. They even have a rolling Irish pub for between stops!

Pace yourself because the next evening, March 14th, the Italian-American St. Joseph's Parade wanders down Royal and Chartres Streets. Though it includes sixteen floats, marching bands and a whole lot of guys with puckered lips dressed in tuxedos, only the marchers and bands are allowed to venture deep into the French Quarter.

On March 15th, enjoy live music, authentic Italian food, and St. Joseph's Day altars on display in the French Market, all celebrating Italian (specifically Sicilian) culture with this "only in New Orleans" holiday.

On March 17th, the Downtown Irish Club Parade begins in the nearby Bywater neighborhood at 6 p.m., and proceeds up Royal to Decatur, then up Bienville to Bourbon. The parade makes several "pit stops" along their way, so be patient! They may not arrive until 8 p.m.!

Just when you catch your breath from all the street parties and parades and get your beads packed away, it's festival season! French Quarter Festival, April 9th " 12th is the largest free music festival in the United States. Twenty one stages throughout the French Quarter celebrate local music and represent every genre from traditional and contemporary jazz to R&B, New Orleans funk, brass bands, folk, gospel, Latin, Zydeco, classical, cabaret, and international music as well as a music stage for children. Our greatest restaurants create "The World's Largest Jazz Brunch" in Jackson Square, the Louisiana State Museum's Old U.S. Mint, Decatur Street, and Woldenberg Riverfront Park is a signature event featuring authentic local cuisine from over one hundred renowned area restaurants. French Quarter Festival has been consistently voted "favorite festival" , "favorite food festival" , and "favorite event open to the public" by locals.

We love our street parades, block parties, and festivals here in the French Quarter! There's never a dull moment and we live to celebrate life and our cultural heritage. Join us any time of the year and "Laissez les bon temps rouler!" " a Cajun expression meaning "Let the good times roll!" It strongly conveys our "joie de vivre" or "joy of living" attitude that pervades all who come to revel in the magical festivities in the Vieux Carre!