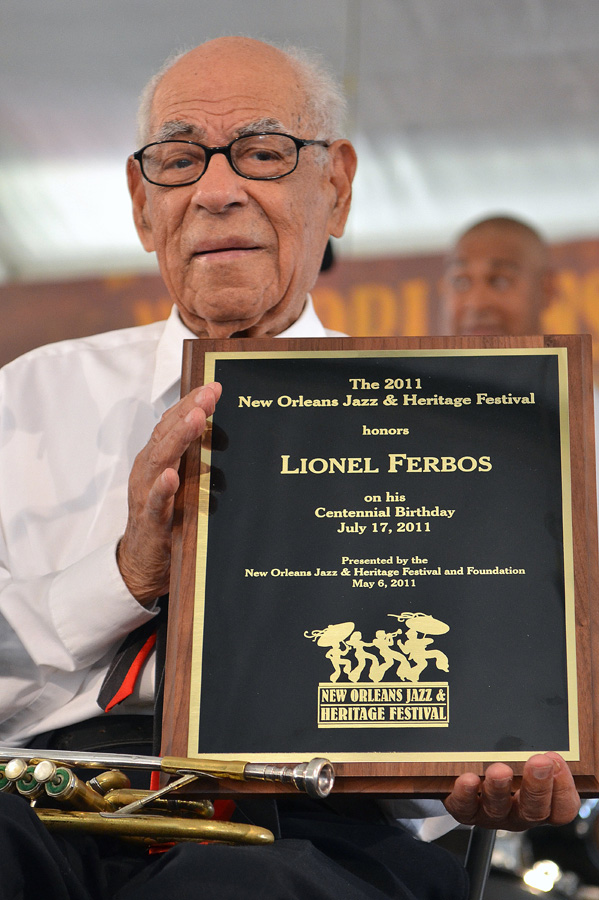 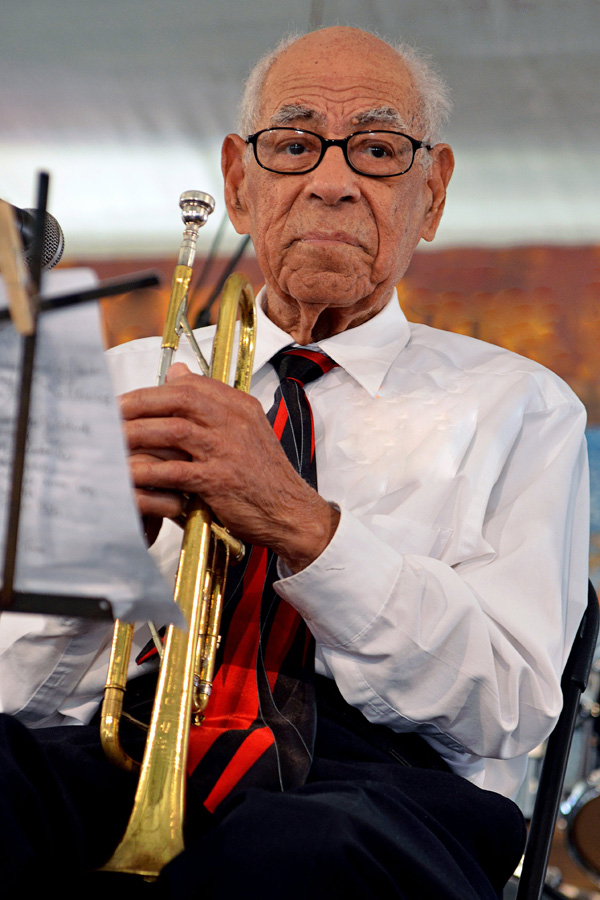 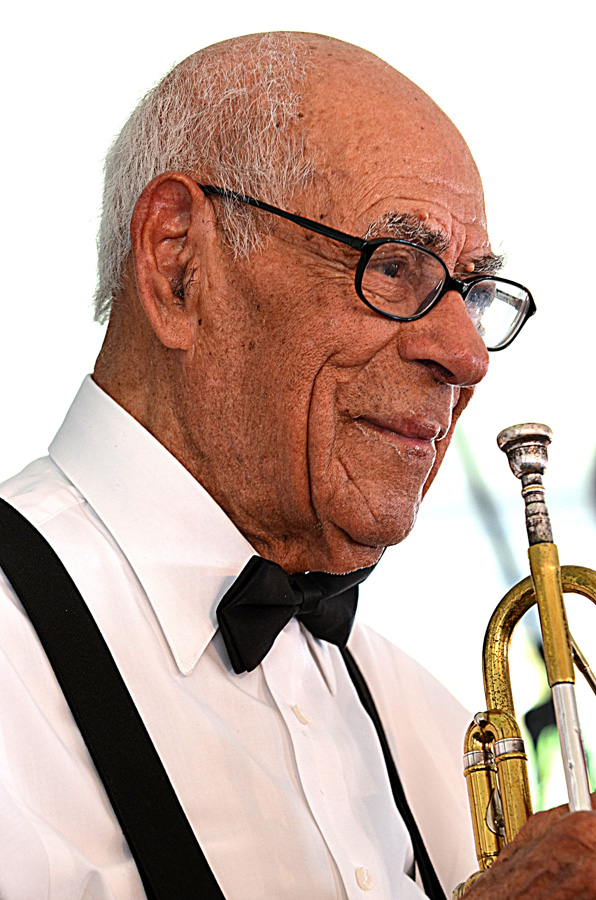 Jazz trumpeter Lionel Ferbos is widely considered the oldest performing musician on the planet. At 101 years young, we adore our eldest statesman of traditional jazz, a native New Orleanian who appears at the Palm Court Jazz Cafe, where he leads the Palm Court Jazz Band each Saturday night. He brings his mastery of the music of a bygone era to his regular gig at the Palm Court, the French Quarter mecca for traditional jazz enthusiasts. "I've had a wonderful life with music," Ferbos says. "As long as I have teeth, I'll keep playing. You can't play trumpet without teeth." Befitting a man nearly the age of the music itself, his face shows some of the wear of eight decades of playing, but his music is timeless.

Jazz masters Danny Barker, Pud Brown, George Lewis, and Chester Zardis were all regulars at the Palm Court Cafe. Now it is Ferbos crooning old standards in a smooth, muddy voice at the Decatur Street hot spot, thrilling the audience with tunes like "When the Saints Go Marching In," "St. James Infirmary," "I'm Gonna Sit Right Down and Write Myself a Letter" and "When You're Smiling." Ferbos plays these traditional jazz standards the way Jelly Roll Morton said they should be played: "Soft and sweet, with plenty of rhythm."

He has played at all of the New Orleans Jazz and Heritage Festivals, at the French Quarter Festival, and at the Satchmo Summer Fest, where he competes with trumpeters less than half his age. Through his long career he has performed with many of this city's legends including saxophonist/bandleader Harold Dejan, saxophonist Captain Handy, and pianist Walter "Fats" Pichon as well as the New Orleans Ragtime Orchestra.

Lionel Ferbos, the son of a Creole tinsmith, was born on July 17, 1911 just outside the French Quarter in the Creole 7th Ward. That was six years before the first-known jazz recordings were released by the Original Dixieland Jazz Band. In his formative years, the improvisational sounds of fellow New Orleanians Louis Armstrong, Sidney Bechet, and Jelly Roll Morton were revolutionizing jazz and American music. Ferbos chose to stick with the more traditional orchestral sound, learning to read music and playing in big bands. In the 1930s, he played with the 48-member black band organized by the Works Progress Administration during the Great Depression, and he is the sole surviving member from that ensemble. In the 1960s, Ferbos left music to help run his father's sheet metal business. It was not until Ferbos reached his late 50's that his music career truly blossomed. In 1970, musician and bandleader Lars Edegran needed a trumpet player for his New Orleans Ragtime Orchestra. He found Ferbos, pulling him out of musical obscurity. "He represents a style of playing you don't see anymore," Edegran says. "He's the only one left from that generation." From there, his career led to countless tours through the States and abroad, including his first trips to Europe, an appearance at the Newport Jazz Festival, film soundtracks (including Pretty Baby, which he considers a career highlight,) the hit show, "One Mo' Time," and numerous recordings.

His beautiful sweet trumpet tone and warm vocal style have endeared him to musicians and audiences worldwide. His keen sense of humor, gentlemanly manner, and dapper dress style has made it easy for him to be instantly accepted and well-liked by everyone he meets. Lionel Ferbos' career has been long and distinguished. He has been the recipient of countless awards over the years, most recently being recognized by the New Orleans Jazz and Heritage Foundation. Despite growing up with asthma, occasional episodes of ill health, and the loss of two of the people closest to him, his son, Lionel, Jr., then his dear wife of 75 years, Marguerite, he continues to do what he loves to do. He still practices at least 45 minutes each day to "keep his chops." There are no signs of his putting his horn down anytime soon as he continues to influence many of today's jazz greats. If you think "I'm Looking Over a Four-Leaf Clover" is an old number, consider that Ferbos was a teenager when it was written. He can play "The Sheik of Araby" with enough bravura to make an audience spontaneously break into a second line. Treat yourself to the sounds of a bygone era and watch him perform with the vigor of a man half his age at the Palm Court Cafe, 1204 Decatur Street, and (504) 525-0200. Open Wednesday - Sunday with dinner served from 7 to 11p.m.