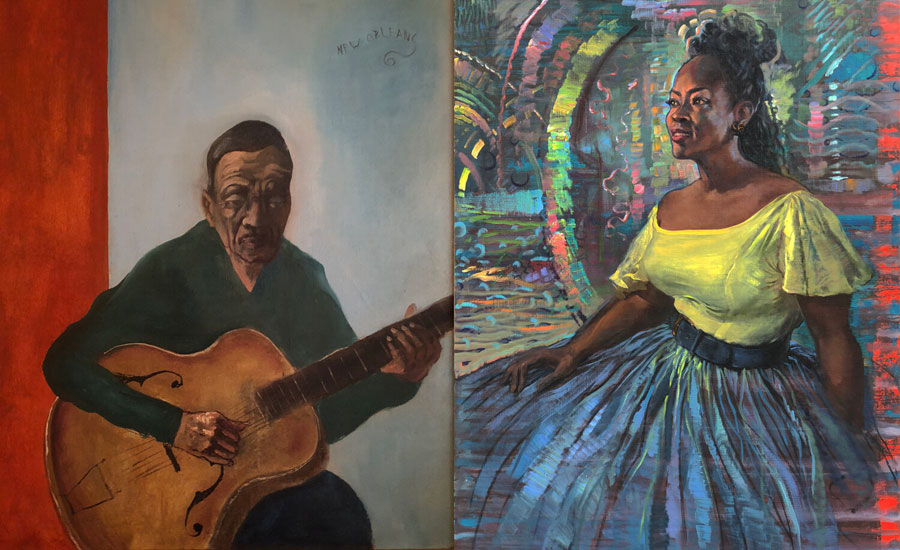 The New Orleans Jazz Museum will debut a new exhibition entitled, “New Orleans Music Observed: The Art of Noel Rockmore and Emilie Rhys.” Visitors are invited to the free opening reception on Thursday, January 30, 2020, from 6-8 pm featuring live music and light refreshments. This new exhibition brings together for the first time the musical portraits of acclaimed artists, Noel Rockmore and Emilie Rhys.

The late Noel Rockmore and his daughter Emilie Rhys are both renowned for their portraits of musicians in New Orleans. Rockmore (1928-1995) and Rhys (1956-present) both have used their unique vision not only to paint musicians but also to reveal their personalities and ways of approaching their music. This exhibit pairs them together for the first time supplemented by the holdings of the New Orleans Jazz Museum, which has the most extensive collection of early jazz artifacts in the world.

“I could not be more thrilled to be chosen by the New Orleans Jazz Museum for the opportunity to exhibit some of my music artwork alongside that of my late father, Noel Rockmore,” Rhys stated. “This is the first time our work will be displayed on museum walls concurrently, and I can’t wait to see what the reaction is from visitors to the show.”

Noel Rockmore was born December 15, 1928 in New York City to artist parents. He started studying art and music at age nine. By the time he was a young man, his work was in group exhibitions at the Metropolitan Museum, Whitney Museum, Museum of Modern Art, and The Pennsylvania Academy of Fine Arts; he had his first one-man gallery show in 1955 in New York City.

Rockmore moved to New Orleans in 1959 and immediately jumped into the bohemian world of the French Quarter. His subjects included street performers, writers, artists, musicians, and other assorted characters. His most famous work came from commissions from art dealer, Larry Borenstein, whose gallery on St. Peter Street became Preservation Hall. Borenstein asked Rockmore to paint the traditional jazz musicians who played his gallery and later the hall. He did both formal sittings and informal sketch type portraits.

“The work of both Emilie Rhys and Noel Rockmore show skill, technique, and passion. ” said music curator, David Kunian. “Their portraits of musicians offer their pronounced and sensitive insight both to the music and the players.”

Emilie Rhys was born in New York City in 1956 and received no formal art training. Celebrated for her pen and ink drawings of musicians produced live in New Orleans music venues, she is also a painter of oil portraits and various other genres. Her art career spans more than forty years. Rhys first lived in the city in 1977 with her father while working as a portrait painter on Jackson Square. That same year, she created a mural in the historic Skyscraper building at St. Peter and Royal Streets.

In 2011, Rhys returned to live in the French Quarter and immersed herself in the city’s music scene. Five years later, to showcase her burgeoning music-art inventory, she opened her Toulouse Street gallery, Scene by Rhys Fine Art. Her work is featured in numerous collections around the globe.

“The relationship of music and visual arts has long been one of mutual exchange and influence and will be celebrated in our exhibition of Emilie Rhys and Noel Rockmore’s work,” said New Orleans Jazz Museum Director, Greg Lambousy, “Emilie has been a longtime friend of the museum and can often be found sketching the many live musicians who perform here. I am especially excited to see her portrait on exhibit of our Jazz Curator Emeritus, Don Marquis.”

The exhibition will display instruments such as Ernie Cagnolatti’s trumpet and George Lewis’ clarinet that were played by the subjects of the portraits and sometimes featured in the paintings themselves. It promises to illuminate new insights into the work of these great artists, the venerated musicians who are their subjects, and even the mysterious nature of New Orleans music and New Orleans itself.