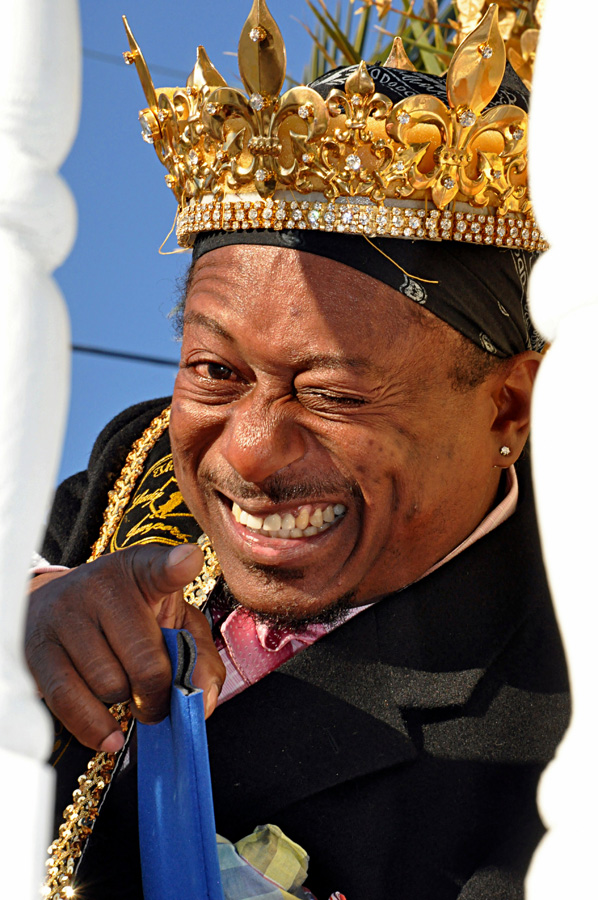 Proud of his humble roots and contributions to New Orleans music, bandleader, vocalist, and jazz trumpeter Kermit Ruffins claims Louis Armstrong as an early role model. He sings with an off-the-cuff charm that is the spitting image of our beloved Crescent City icon, "Satchmo," as he plays his trumpet with a bright, silvery tone. The jazz served up by our native Orleanian with a sunny disposition is as Louisiana as dirty rice and embodies the very essence of New Orleans jazz.

In Kermit's world, food and music go together like red beans and rice. The joy of New Orleans food figures prominently in his music, and he has opened his own restaurant and music venue that has the elusive quality that tourists love: local authenticity. Kermit's Treme' Speakeasy Restaurant 1535 Basin St., (504) 309-5828 in the historic Treme neighborhood serves large portions of traditional New Orleans soul food, Creole-style country dishes, and boiled seafood mainly cooked by himself. This corner bar is less than a half-mile from the French Quarter and a cheap cab ride away. Kermit and his Barbeque Swingers play jazz standards, show tunes, and many original pieces at his Speakeasy on Sundays and Mondays from 6 until 7:30pm.

Kermit, a fixture on the New Orleans jazz scene, lends authenticity to the popular HBO series Treme' by playing himself. New Orleans, known for both celebrity chefs and celebrity musicians, lacks combination musician-chefs and he handily fills this niche. He often shares red beans and rice with barbequed meat that he cooks on his grill for his fans. Television food celebrities, Jamie Oliver and Andrew Zimmern, have even touted Kermit's recipes.

Kermit started playing trumpet in 8th grade and co-founded the Rebirth Brass Band in 1983 while attending high school in the Treme neighborhood, frequently busking the French Quarter for tips. Rebirth's creation was inspired by The Dirty Dozen Brass Band, credited with bringing influences of funk and contemporary bebop into New Orleans style brass bands. Though he grew up in a decade when Michael Jackson, Bruce Springsteen and Madonna were at the top of playlists, Ruffins still vividly and emotionally recalls the moment when Louis Armstrong became his musical universe. "When I started out playing, it was down on the streets in the French Quarter for tips, and we'd sit and watch all the guys in suits going inside to play in the clubs," he said. "I was watching one day when all of a sudden I heard one trumpet on the juke box, and it was Louis doing a solo in When You're Smiling. I was so overwhelmed that I went that day and bought all his music that I could find. From then on, whenever my friends got together to play, we'd be drinking, eating barbecue and watching Louis Armstrong."

Kermit founded the Barbecue Swingers in 1992, a traditional jazz quintet, and they have played almost every Thursday around 8pm since then at Vaughan's Lounge, 4229 Dauphine St., (504) 947-5562. Deep in the Bywater neighborhood, Vaughan's is a down-home, funky blues and jazz dive in a residential area that is popular with both locals and visitors. It's a taxi ride from the French Quarter, but on Thursday nights when Kermit is playing, it's packed and a requisite New Orleans scene. Try some of Kermit's barbequed turkey necks that he grills up before the show!

Whether listening to a track on his newest CD, Happy Talk, engaging him in conversation or hearing his voice on an answering machine message, one word springs immediately to mind to describe Kermit Ruffins. Passion. He lives it, plays it and sings about it, and nowhere is it more evident than when he discusses the swinging, good-time jazz that lured him in as a teenager and continues to whet his appetite even three decades and eleven solo recordings later.

A visit earlier this year to "Satchmo's" former home in New York, since labeled a national landmark and transformed into a museum, was similarly life changing for Kermit who eagerly, and humbly, accepts any comparisons to his idol. "I really can't put into words what that meant," he said. "You look at the stairs out front where he would give lessons to neighborhood kids, and then you go through the house and see his rooms and hear his conversations; it was so powerful for me. I was very choked up. That's someone who really led one of America's true art forms. He was the cherry on top of New Orleans music. And now I see it being passed on to younger kids, and for me to have a role in that and to maybe do the things he did is so spiritual to me."

Kermit is also a good friend of Irvin Mayfield, and sometimes competes with him at Irvin Mayfield's Jazz Playhouse in the Royal Sonesta, 300 Bourbon Street, (504) 586-0300. Ruffins and Mayfield first squared off onstage years ago and Mayfield stated, "People love it. There's a tradition and history around trumpet battles. Whether or not people know jazz or like jazz, people understand the idea of a competition. It's developed into a fun rivalry." Recently, Mayfield's mother attended on the same night as Ruffins' mother.

"My mother sold me out," Mayfield said. "She wound up being on Team Kermit."

Hundreds of shows and barbecues later, promoting the status of jazz is among Ruffins' pet projects. He has become one of the city's signature iconic symbols and was even featured on the 2013 French Quarter Festival poster. Catch one of his performances for a memorable taste of iconic New Orleans jazz.