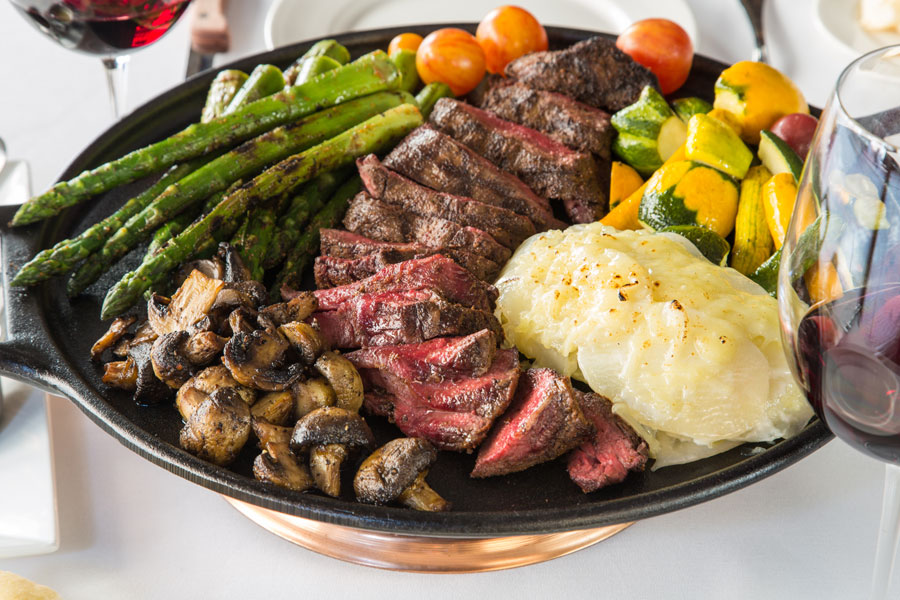 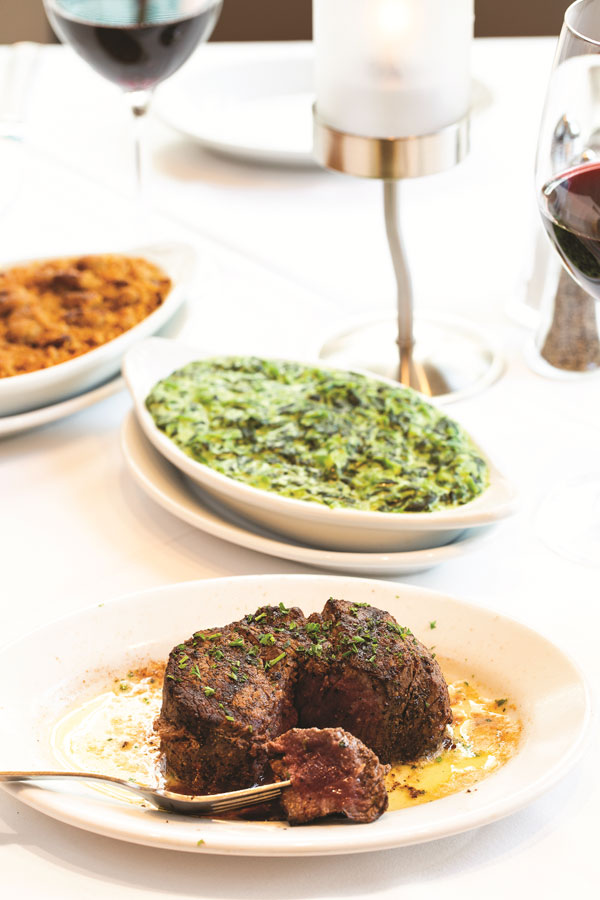 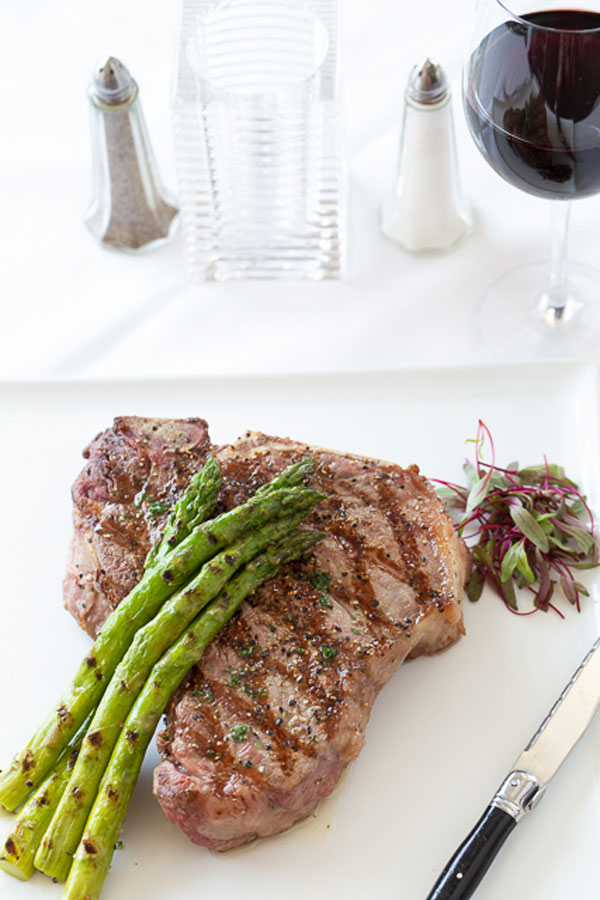 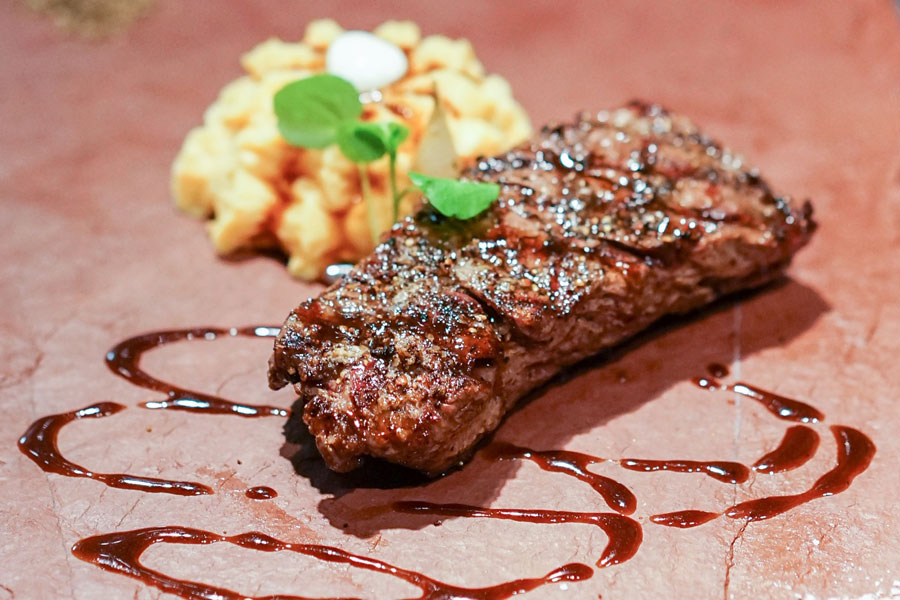 Though boiled crawfish, blackened fish, shrimp remoulade, and chargrilled oysters consume the spotlight in New Orleans dining, this seafood town has a long history of steakhouses--and the downtown area has some of the most luxurious and interesting.

Steakhouses typically stick to a particular formula: quality cuts of beef, iceberg lettuce salads, creamed spinach, and potatoes cooked a plethora of ways all served among the shadows of a clubby, masculine, dark-wood paneled dining room. Though New Orleans has some that expertly follow that playlist, most of them don’t. (And even those that do mix in a ton of New Orleans classics.)

From dark eateries dishing Argentine-style steaks with chimichurri to bright, cosmopolitan restaurants serving Middle Eastern-inspired appetizers as a prelude to dry-aged steaks to clubby spots that offer the steaks with French sauces along with accompaniments like gumbo and New Orleans-style barbecue shrimp, New Orleans is a wonderland of these meat meccas. Here are some of the very best in the downtown area.

If New Orleans has a king of beef, it’s Desi Vega. This New Orleans restaurant industry veteran owns several restaurants around town: Desi Vega’s Prime Burgers and Shakes in Harahan, Mr. John’s Steakhouse on St. Charles Avenue in the Garden District, Desi Vega’s Seafood and Steaks in Metairie, and the luminous Desi Vega’s in the CBD, with which he solidified his reputation and grew a mini-empire.

Unlike steakhouses that espouse dark wood and the embellished ambiance of a gentlemanly library or private club, over a dozen floor-to-ceiling windows overlooking a corner of St. Charles Avenue wash Desi Vega’s crisp white walls with light.

Vega spent many years in the New Orleans restaurant scene, earning his chops under the iconic Ella Brennan at Commander’s Palace, powerhouse Ruth Fertel at Ruth’s Chris Steakhouse, and under Emeril Lagasse at Emeril’s Delmonico. He opened Desi Vega’s in the CBD in 2013 with partners Rodney Salvaggio and Paul Varisco.

For Saints home games, Desi Vega’s opens its lounge at noon for eye-openers before kick-off and starts serving a 3 p.m. in the dining room. (The restaurant is normally closed on Sundays.)

Though Ruth’s Chris Steakhouse is no longer locally owned, this legendary steakhouse sprang from New Orleans in 1965 after single mother Ruth Fertel found a classified ad in the Times Picayune for the sale of Chris’s Steakhouse, a 60-seat restaurant on N. Broad that had failed six times under previous ownership. Against advice, she mortgaged her home to pay for it, hoping it would be a good way to pay for her two sons’ college educations.

The former horse trainer (the first female horse trainer in Louisiana) had no restaurant experience, but she learned every aspect of her steakhouse business including butchering. She staffed her restaurant with the hardest working people she knew--single mothers. In fact, the entire waitstaff was female.

She franchised Ruth’s Chris in 1970, growing the once unsuccessful steakhouse to over 80 locations. The impeccable USDA Prime midwestern steaks come out sizzling on a 500-degree plate. In addition to the steakhouse standards, the luxurious restaurant serves a large number of sides including creamed spinach, grilled asparagus, sweet potato casserole, and lobster mac and cheese. New Orleans favorites like barbecue shrimp, crème brûlèe, and white chocolate bread pudding are also on the menu.

There are plenty of non-steak reasons to dine at Ruth’s Chris as well, like the chicken breast stuffed with garlic herb cheese, creamy lobster bisque, and chilled seafood tower.

With a massive Irish whiskey selection and tableside martinis, Dickie Brennan’s raises the bar for any steakhouse anywhere. Be sure to order the black and gold martini with 24-karat edible gold leaf and Cajun caviar stuffed black olives. (They’re good any day, but especially good on Saints game days..

The sparsely decorated and intensely masculine interior with tiny white and black tiles covering the floor and loads of dark wood paneling lets the food, booze, and service star as the core of this restaurant.

Popular with folks stopping in for a business lunch, Dickie Brennan’s is located in the French Quarter between Bourbon and Royal. Discounted parking available next door.

The bar opens daily at 4 p.m. (3 p.m. on Saturdays) with dinner service starting at 5:30 p.m. Happy hour runs weekdays from 5 p.m. to 7 p.m. with select cocktails and bar snacks, like mini beef Wellingtons for$5.

Fall also marks the return of popular Friday lunch from 11:30 p.m. to 2:30 p.m. with classic cocktails only a buck. Also look for the local steak board, a new dish coming this fall with humanely raised, sustainable meat from Raine’s Farm in Louisiana and Home Place Pastures in Mississippi, served with the chef’s choice of sauce and garnish.

This dry-aged beef jewel box got its start in Israel when owners Doris Rebi Chia and Itai Ben Eli opened Doris Butchers in Israel. They expanded to Costa Rica with the first Doris Metropolitan before landing in the French Quarter with their first U.S. location on Chartres Street just a block from Jackson Square in the French Quarter. Since then, it’s become one of New Orleans’ favorite restaurants.

Visiting this European-chic restaurant with walls lined with reclining bottles of wine, a glass case displaying dry-aging beef, a lush courtyard, a horseshoe shaped bar with views of the kitchen, and an interior washed in neutral tones with pops of green is an opulent, almost exotic, experience.

In addition to dry-aged steaks, much of the menu hints at the restaurant’s Middle Eastern heritage, like an appetizer of charred eggplant, tahini tomato concasse, pinenuts, and sumac. There are also plenty of vegetables on the menu that don’t involve the cream and butter typical of other steakhouses.

Chef Adolfo Garcia opened this Argentine steakhouse in 2006 in a tiny spot on Fulton Street. Its popularity outgrew this petite home, and La Boca moved to a larger location eight years later. Located walking distance from the Convention Center, this dimly lit restaurant with walls of exposed brick has been churning out Argentinian steaks for years.

With at least 13 different cuts of beef each night including “outside” skirt steaks, a habit-forming housemade chimichurri sauce, plus a huge selection of Argentinian wines, this eatery is unlike any of the others on this list.

Appetizers include classic Argentinian offerings like empanadas, chorizo, blood sausage, and grilled Argentine cheese with olive oil and oregano, as well as desserts like dulce de leche ice cream, crepes filled with caramelized condensed milk, and more. Also, be sure to try the French fries, which happen to be one of the most beloved offerings on the menu.