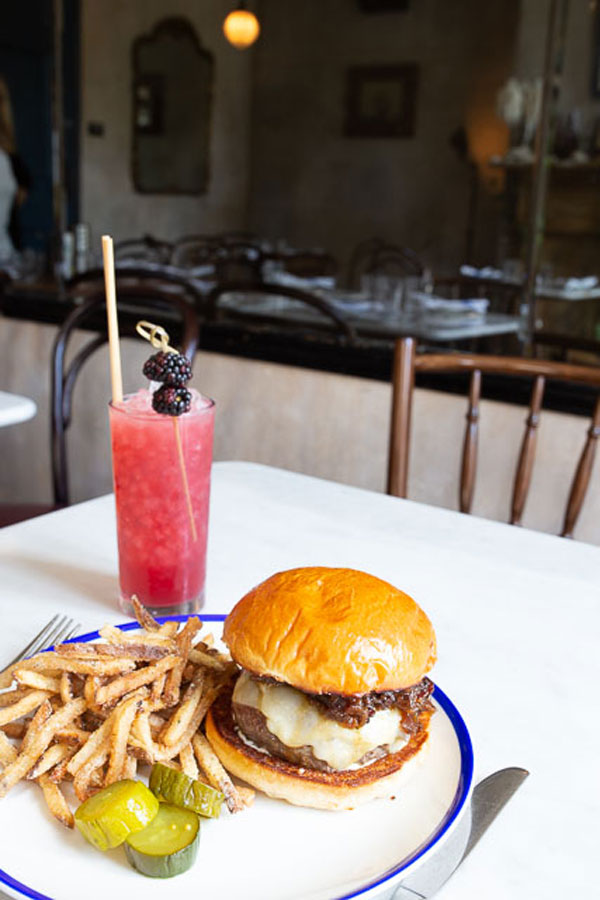 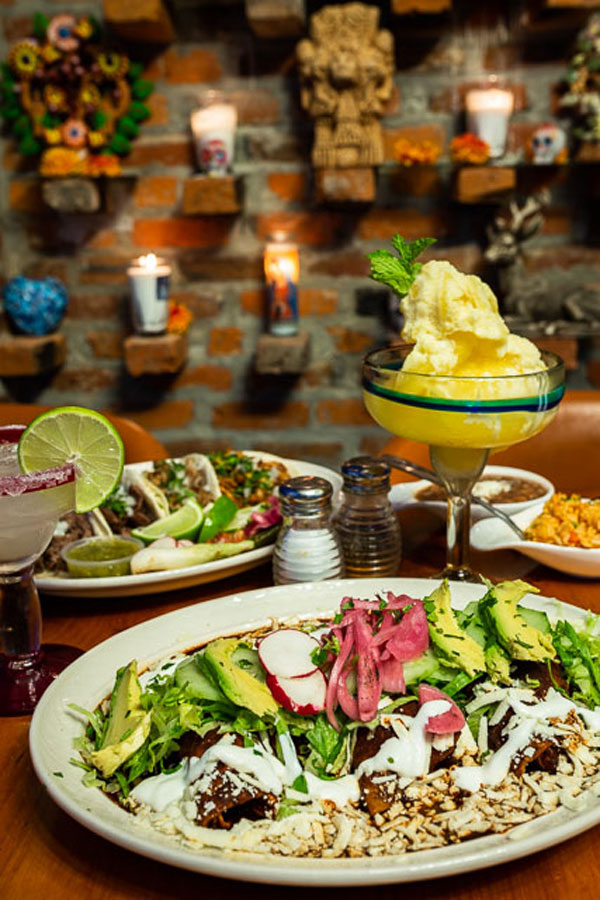 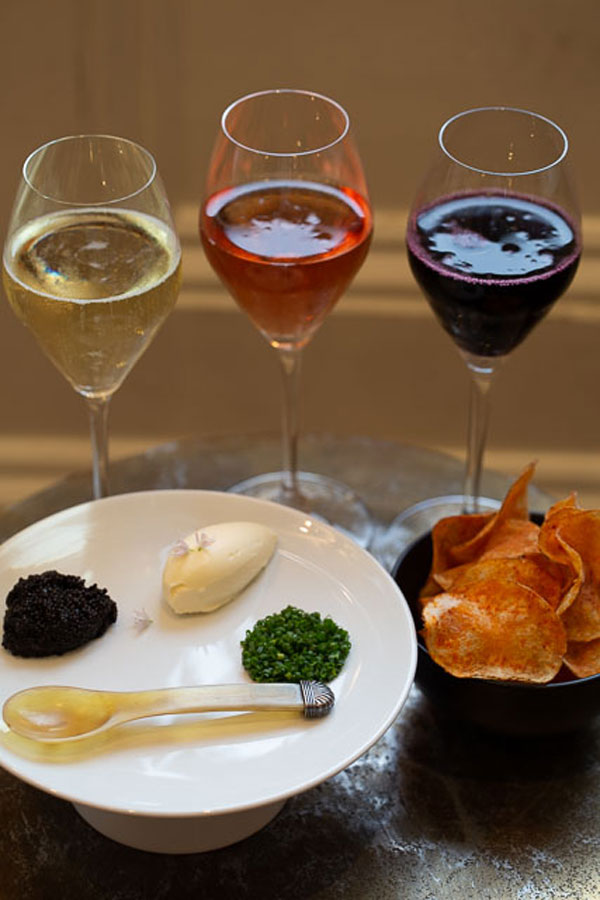 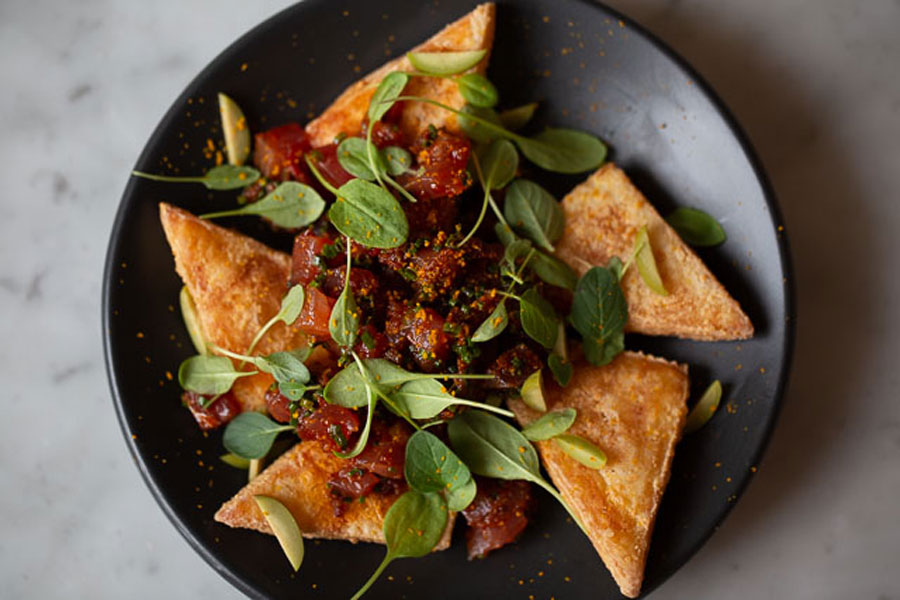 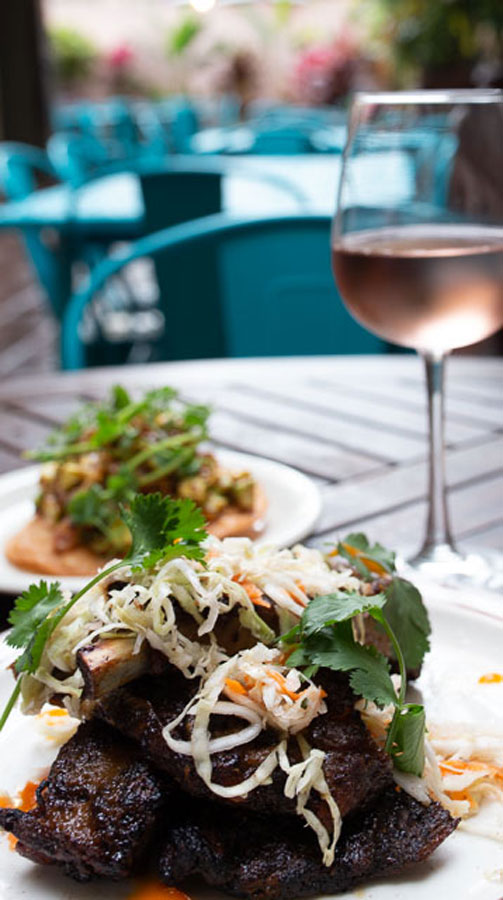 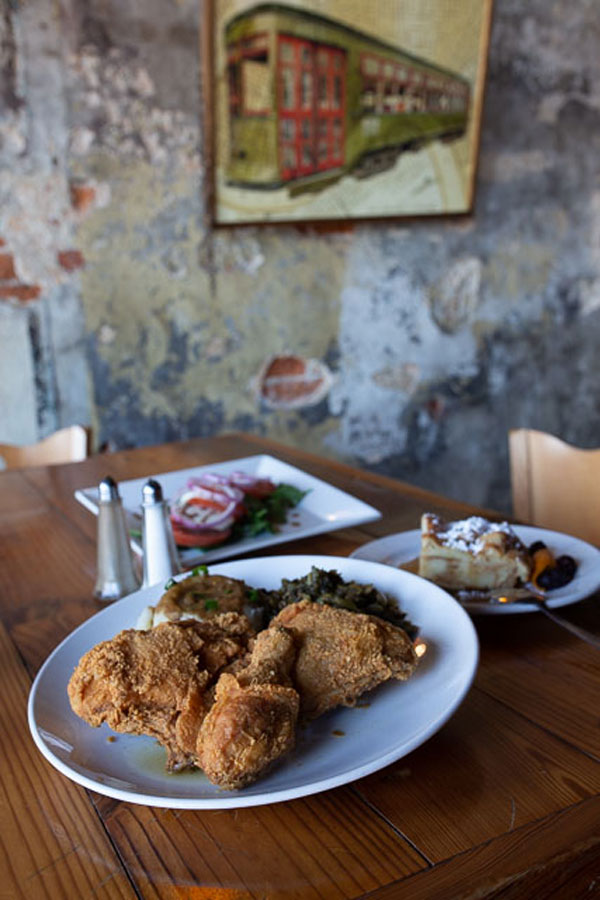 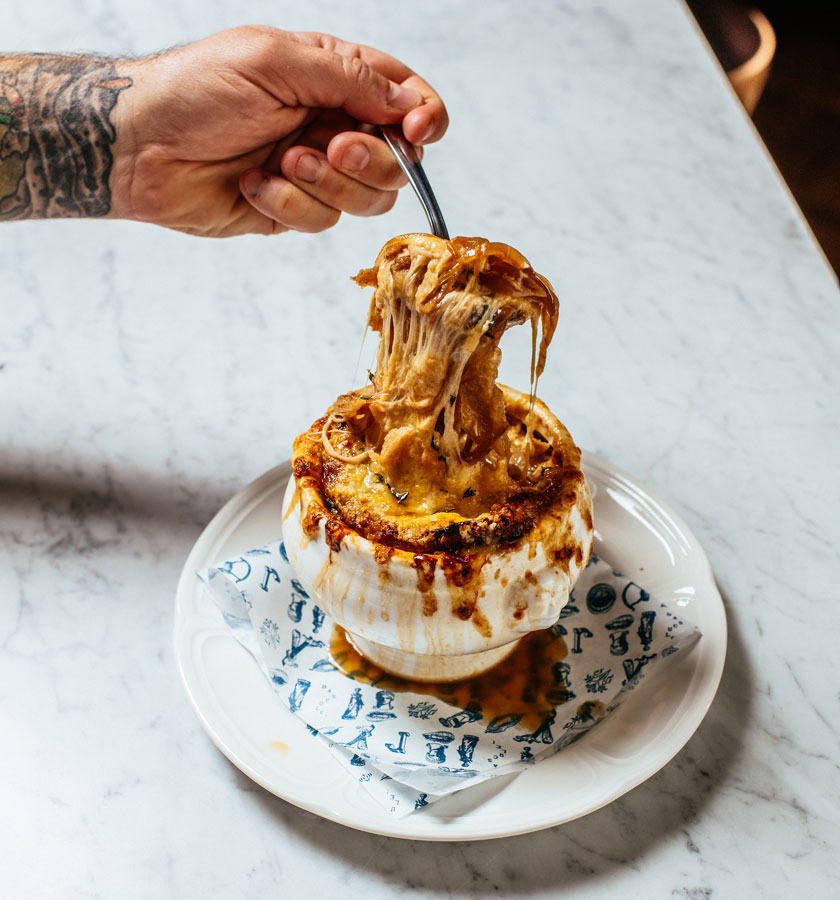 It’s easy to miss the standard dinner hour in New Orleans. Maybe a trip to the theater pushed the meal back or the entire shrimp po-boy you devoured for lunch monopolized your stomach real estate.

Just because many restaurants turn off their burners around 10 p.m. doesn’t mean anyone needs to miss a meal though. Sure, the city is dotted with no-frills, 24-hour joints that will get you fed at any hour, but this list is for the times when a decent meal with all the frills is the goal.

With plenty of options in the downtown or French Quarter area, late night dining means slurping fresh oysters bellied up to a thick marble bar, tucking into a tower of fresh seafood, sipping Champagne while popping caviar and pommes frites, or devouring a few tacos while the moon hangs high.

It’s hard to know how the Crescent City, with its Francophile leanings, ever existed without a sparkling wine bar--yet it did until the glorious Effervescence Bubbles + Bites popped open in the spring of 2017. By the end of the year, Rampart Street’s charming sparkling wine house had won Eater New Orleans Bar of the Year award.

The bar manages to remain decidedly unfussy while providing an elegant atmosphere where sparkling chandeliers spill light onto marble-topped tables and the gold-topped bar. With 30 bubbles by the glass, nine sparkling wine flights, other wines, and a few beers that cover a variety of price points, the bar remains an approachable and beloved neighborhood spot that lives its mantra to celebrate every single day.

The glass-walled kitchen preparesprecisely executed dishes until 12:30 a.m on Fridays and Saturdays (until 10:30 p.m. on Wednesdays and Thursdays), catering to an eclectic crowd with a dedicated late-night menu. This includes a caviar menu that spans price points and tastes with “a luxurious Kaluga fusion caviar, a delicious local bowfin caviar, and an affordable vegetarian beluga lentil ‘caviar,’” owner Crystal Hinds says.

The current late-night menu also boasts Murder Point oysters with harissa mignonette and-- the newest dish on the menu--spicy, chilled yellowfin tuna tartare served with a warm and filling chickpea panisse (a chickpea cake whose creamy interior is encased with a delicately crispy exterior) and dressed in a tomato soffritto. Crispy Brussels sprouts arrive at the table with roasted garlic cashew dip and Gulf bottarga while the standard pommes frites come with a seasonal aioli. The grilled half wheel of luscious Brillat-Savarin cheese, served with toasted bread and dates, is the best reason in the world to go ahead and order another bottle of Champagne.

Even if bottles aren’t still popping by the end of the meal, dessert is popping in the form of a popcorn pot de creme inspired by Hinds and team’s affection for popcorn with a glass of bubbles.

A meal in New Orleans can make any man a king, even late at night when the city itself still has bright eyes and a full oyster bar. It’s just part of New Orleans’ special style of joie de vivre.

Located in the ultra-hip Ace Hotel in the CBD, Seaworthy occupies three floors of an 1832 Creole cottage that seats 115. (A courtyard seats an additional 40.) Each floor feels as intimate as a dark secret, with distressed finishings, original staircase, and candles with layers of dripped wax.

The small marble oyster bar on the first floor features bivalves from American coastal waters until 1 a.m. every single day. A late night menu kicks in from 11 p.m. until 1 a.m. each evening with caviar from France (the least expensive), Louisiana, and Georgia (the most expensive). Late night appetizers like ceviche, rillette, and pork belly add to the decadence.

Seaworthy showcases sustainable seafood, but dang it’s got a bomb burger (50/50 brisket and chuck) topped with fontal cheese, country ham, and garlic aioli. Luckily, the burger sticks out the day and makes it to the late night menu along with a crawfish roll that takes its cues from a lobster roll.

The late night menu keeps things relaxed with an entire menu section of beer and shot pairings, plus daiquiris, cocktails, wine, and occasionally a special punch.

James Beard Award-winning chef Justin Devillier’s feverishly anticipated third restaurant just opened its doors at the tail -end of January, so dining at odd hours might actually be the best bet for those who forgot a reservation at this chic Parisian-style brasserie.

Chef Dan Causgrove, who formerly led the impeccable Seaworthy kitchen and worked as Devillier’s sous chef at his award-winning La Petite Grocery, is the executive chef at Justine. Just like Seaworthy, Causgrove is serving a swoon-worthy late-night menu until 1 a.m. on Fridays and Saturdays (the restaurant closes at 11 p.m. on other days).

The big draw of this late night menu is a selection of raw oysters from the East Coast and the Gulf Coast. Other decadent options include onion soup, a burger crowned with Emmentaler, a salad niçoise topped with yellowfin tuna confit, a sandwich filled with duck fatfried chicken paillard, a 14 ounce-ribeye, and mussels and frites.

The 200-seat restaurant itself, designed by award-winning design firm Farouki Farouki, will likely win the city’s restaurant design awards this year with its candlelit masonry walls, diamond-patterned smoke glass mirrors, lots of greenery, and a fountain designed to recall an absinthe decanter.

With a dinner menu that doesn’t stop until midnight on Friday and Saturdays, guests can cap (or begin) their night with late-night dining in this sepia-toned, rum-centric bar with distressed walls, floor-to-ceiling arched windows, and a long marble bar dotted with plenty of fresh herbs and citrus.

Cane and Table looks to the Caribbean for its food and drink menu inspiration. The Caribbean has long held considerable influence on New Orleans, especially considering its role keeping New Orleans wet during the dry days of Prohibition. In fact, many consider New Orleans to be the Caribbean’s northernmost city.

Unlike other late night dining spots, this spot serves its full dinner menu until close, including gems like black-eyed pea hummus, tuna tostadas, empanadas, rice tinted with squid ink, tuna a la plancha, and tres leches cake. The back patio provides a perfectly tranquil oasis on a hot, humid night for enjoying that late-night.

Cane and Table stays open until 11 p.m. on Sunday through Thursday. On Fridays and Saturdays, dinnertime stretches on until midnight. Keep on eye out for a new cocktail menu after Jazz Fest.

Open seven days a week until 2 a.m. and named for the patron saint of cooks, this restaurant was built with service industry workers’ late night dining needs in mind. The casual menu takes its inspiration from Louisiana cuisine with oysters topped with tasso cream, a fried seafood platter, red beans and rice, fried chicken, collard greens, and crawfish mac and cheese.

Of course, the menu changes some each season. Recently, St. Lawrence added catfish and shrimp maque choux to its offerings. Once soft-shell crab season starts rolling, look for softshell crab bits to hit the menu.

In addition to a full menu, Saint Lawrence, like its sister restaurant St. Cecilia, serves seasonal fresh fruit daiquiris like the Pimm’s Cup. There are plenty of cocktails as well as over 65 beers on tap.

The cafe’s long, narrow interior includes simple furnishings, an exposed brick wall, and large French doors opening to N. Peters Street adds to the atmosphere. If Egyptian linens and soft pillows are more your style, St. Cecilia offers delivery through Postmates making it a fine option for late night dining from the comfort of bed.

Service industry workers get $1 off anything over $3 until midnight and $2 off the same after midnight.

If there was ever a late night meal that is more comforting than tacos, do let us know. This petite Mexican restaurant keeps its ovens burning until 4 a.m. every day but Tuesday, with tacos filled with everything from lengua (beef tongue) to vegetarian nopales (sauteed cactus and onions). There are so many choices that the way to go is “Mix & Match,” allowing a choice of three tacos.

Appetizers include old standards like guacamole and queso fundido, as well as the super-trendy and extremely delicious Mexican street corn covered in mayo and crema and rolled in salty cotija cheese, guajillo pepper seasoning, and fresh cilantro.

Plus, there’s a full bar with plenty of agave options and margaritas to keep the party going. An added bonus--the chairs are large and comfortable.