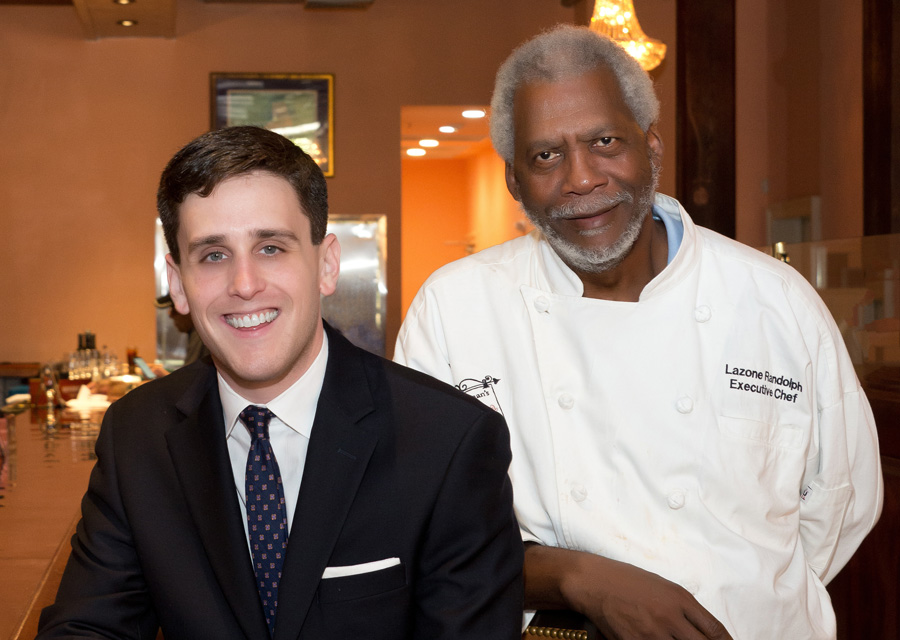 He’s been addressed by many colloquial titles in his more than 50-year cooking career. “Star of the Show,” being the latest. Ted Brennan’s Decatur Executive Chef Lazone Randolph has resumed the role he was meant to play, and did, for decades.

When the descendants of New Orleans’ Brennan family restaurant dynasty stepped down from the renowned Brennan’s on Royal Street and reached out to begin another Brennan restaurant several blocks away, they knew they could count on Chef Lazone to join them in their new enterprise.

“The Rock,” is how Chef Lazone is described by third generation members of the Brennan family who recently opened Ted Brennan’s Decatur restaurant in the French Quarter. Ted Brennan, the son of Brennan’s restaurant- founder, Owen Brennan, managed Brennan’s for 40 years with his two brothers after the passing of their father.

After the Royal Street restaurant was sold (subsequently bought by another family member restaurateur, Ralph Brennan and Terry White), Ted Brennan and children, Teddy and Bridget Brennan Tyrrell proceeded to find and open their new place. Complications, renovation, and other matters stalled the project for longer periods than expected, but the family was committed. Sadly, they lost their father along the way due to a heart attack, but the project went on, now dedicated as a legacy to their father and his heritage.

Teddy Brennan said, “Chef Lazone played a huge part in helping us to continue and attain our goals. He was largely responsible for keeping in contact with former staff members and recruiting them to rejoin us, both kitchen and front of the house staff.”

Chef Lazone has spent his entire career with the Brennan family at Brennan’s on Royal Street. In 1965, just after graduating from Carver High School, he began as a dishwasher. Under the tutelage of several generations of New Orleans’ royal restaurant family, he began cooking, which he always aspired to do.

“Quality, consistency, following the recipes, and style were what mattered,” he said.

“Miss Ella (Brennan),” Owen Brennan Sr.’s younger sister, “used to hire European chefs,” Randolph noted. “These guys had so much knowledge and I learned a considerable amount from them. Our kitchen staff actually got free lessons from these amazing culinary professionals.”

During his years at the Royal Street Brennan’s, Randolph traveled to London to cook for a large group at the United States Embassy, and was a guest chef at London’s Hotel Meridien for several weeks. He also traveled to Ireland for a Delta Airlines promotion, and to Hawaii to prepare food for a large meeting planners convention.

Perhaps one of Chef Lazone’s most cherished compliments is from Ted Brennan and his brothers, Owen ”Pip” Jr. and Jimmy in 2013, commenting that Chef Lazone was appreciated as “one of the finest employees Brennan’s has ever known.”

His passion for Creole cooking and devotion to the Brennan family members, who steered him along the way, is heartfelt and evident in every course he prepares.