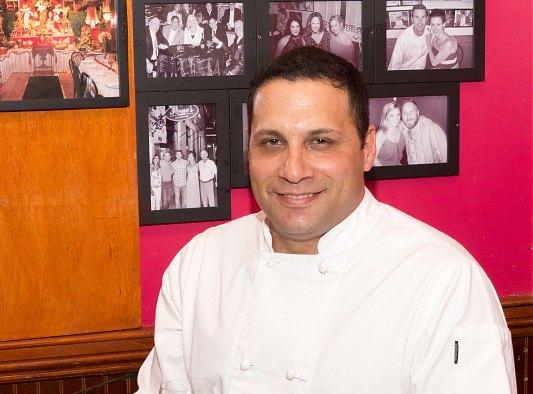 Upon appearance, Nicholas Scalco may appear more like a top-notch athlete than an acclaimed chef, but then, both profiles are correct.

But cooking was not his first choice as a career. Although he grew up in several of his family’s New Orleans‘ restaurants, he filled the roles of valet, busser and dishwasher on occasion—the closest he got to the kitchen.

But after high school and a stint in the military, “I realized I wanted to go to culinary school, learn to be a chef, and become knowledgeable about the restaurant business,” he said.

During his military service, he was stationed in Okinawa and North Carolina, and then sent to California where he experienced many varied restaurants. ”I gained an appreciation for cooking skills and developed an interest in different food cultures and a love for the craft,” he said.

After four years in the Marines, Scalco chose the California Culinary Academy in San Francisco to further his education. He continued dining at the city’s excellent restaurants and expanded his wine knowledge with visits to the Napa and Sonoma wine country.

Through the Academy’s culinary program, Scalco externed at Commander’s Palace, where he had the opportunity to work under the late, highly honored Chef Jamie Shannon.

Following graduation, Scalco worked in Irene’s kitchen for a few months, before leaving for his first trip to Italy.

“My mom arranged with a wine exporter friend for me to work at his favorite restaurant in his home town, San Benedetto in Abruzzi. He also set me up in a 1,000 sq. ft. apartment on the beach on the Adriatic Sea,” said Scalco.

“I didn’t speak any Italian, and I was washing dishes and doing prep work in an all-Italian kitchen. I thought, ‘Wow, now I know how Mexicans feel in the U.S.’“

In the restaurant, San Savino, Scalco was taken under the wing of a lady named Rosa. “I was there for six months and learned the regional cuisine,” he said. After returning to New Orleans, he alternated working at Commander’s and Irene’s with a short stint at Gautreau’s wedged in between. In 2000, he went to work at Irene’s full-time and was named chef de cuisine in 2006.

Although the menu reflects a great deal of what he learned on his sojourn in Italy and other travels, he never stops reading, watching the food network and dining out to gain inspiration. “Watching the Food Network is just like sitting in class at culinary school,” he said with refreshing candor.