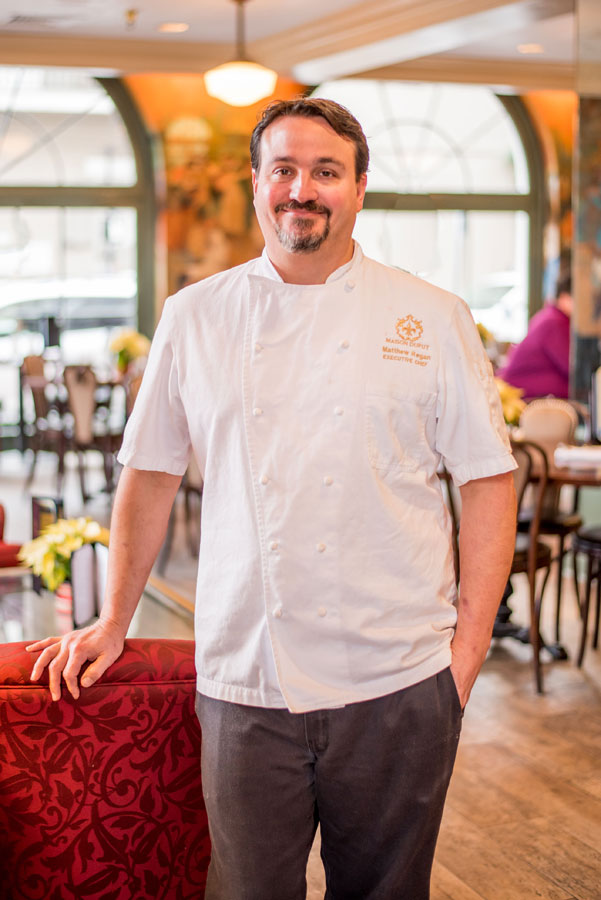 Regan developed a following as executive chef at Luke, a beloved restaurant that is part of the Besh Restaurant Group co-owned by celebrated Chef John Besh.

Regan’s tasteful talents are not just in the culinary arts. A native of Pittsburg, PA, Regan gained his college degree in classical guitar followed by graduate school in the music arts.

During those years, he worked in restaurants in the “front of the house,” waiting tables. But, he adds, “I was always more interested in what was going on in the kitchen.”

Regan and his young family eventually moved to New Orleans. Surrounded by numerous fabulous dining establishments, he was inspired to shift gears. Cuisine was to become his forté.

“The energy of the kitchen was the most magnetic part of it,” said Regan. He compares his two artistic passions – playing classical music and cooking – as “show time!”

His first job here was at the renowned Emeril’s, as a line cook. “I stayed a year, which was possibly the equivalent of going to culinary school,” he laughed. Regan’s follow-up chef position was a five-year stint at Victoria Inn in Lafitte, Louisiana.

The Besh organization welcomed him next where he spent six years working at Besh Steak, America Sector, and Luke, which he describes as “high octane”—that energy thing again!

Regan expresses his experiences with the Besh group: “The amount of talent was amazing! Just working with these chefs was an education.”

After Luke, he joined the Hyatt Regency’s Vitascope Hall as chef de cuisine, earning a silver medal at the 2016 New Orleans Food and Wine Experience.

Regan describes his cooking as modern Gulf Coast. “Our cuisine is locally inspired,” he said. “We seek out the freshest, seasonal ingredients to create our traditional Cajun, Creole, and other specialties.”