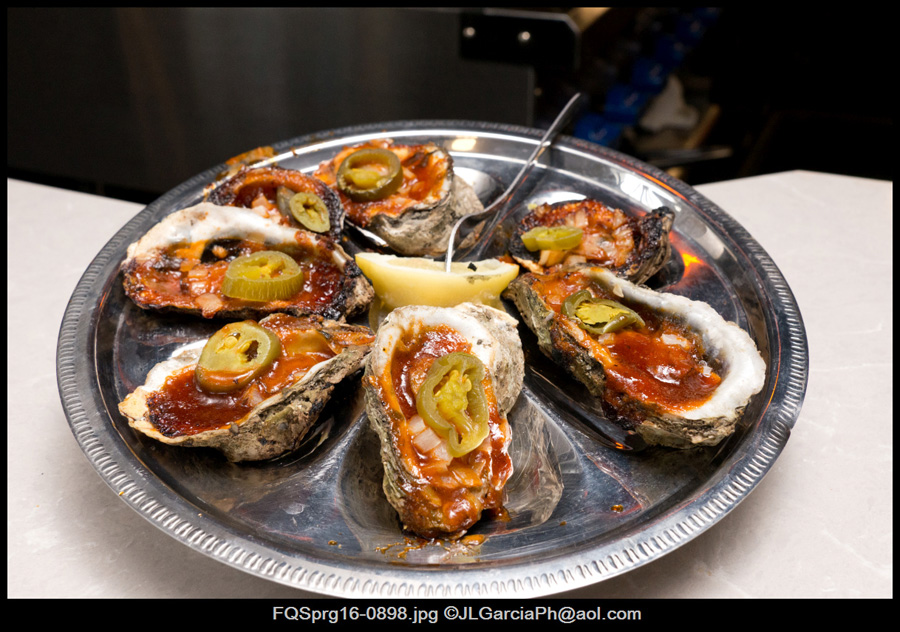 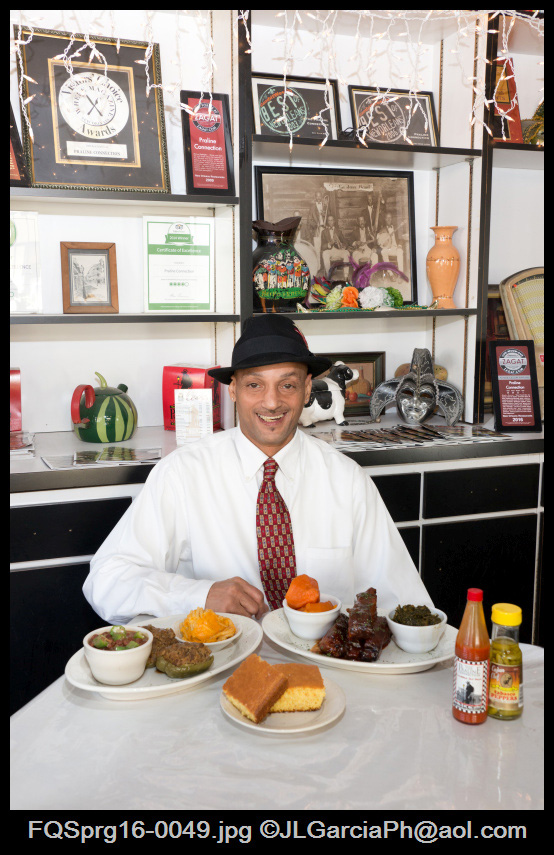 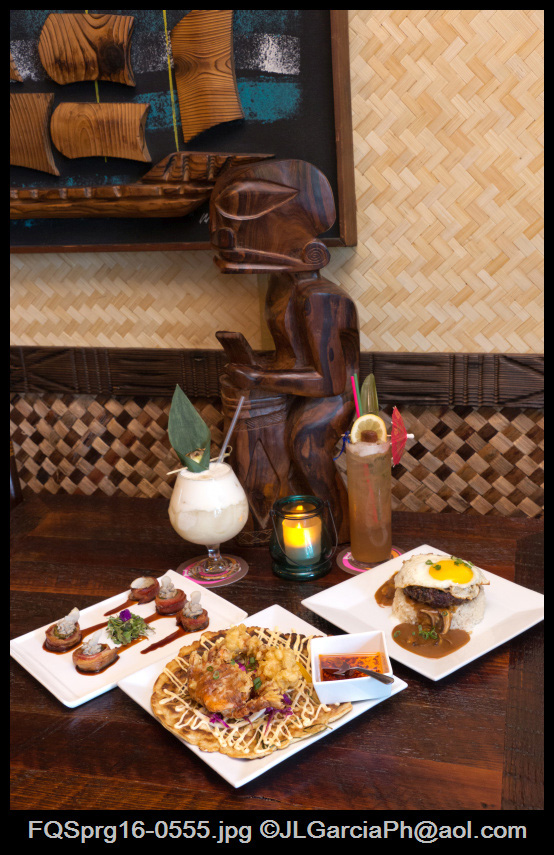 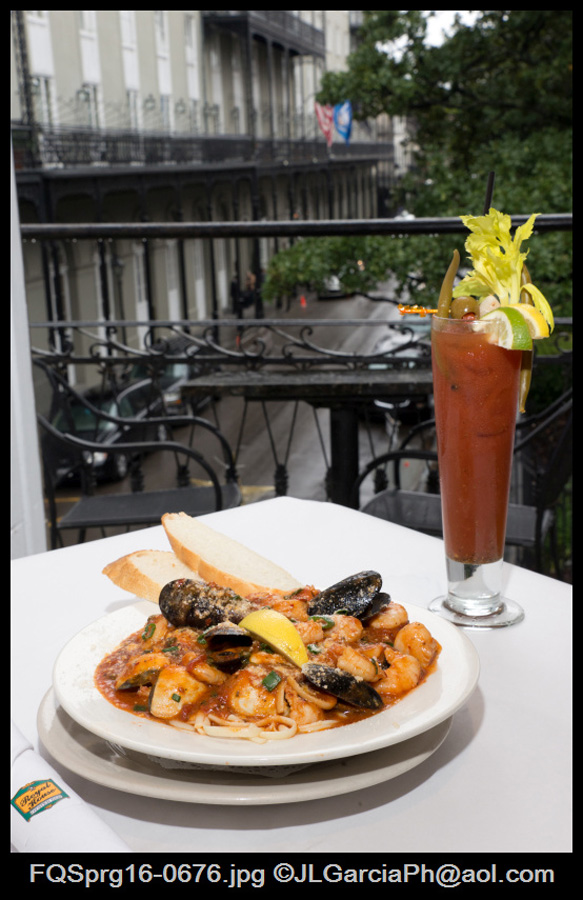 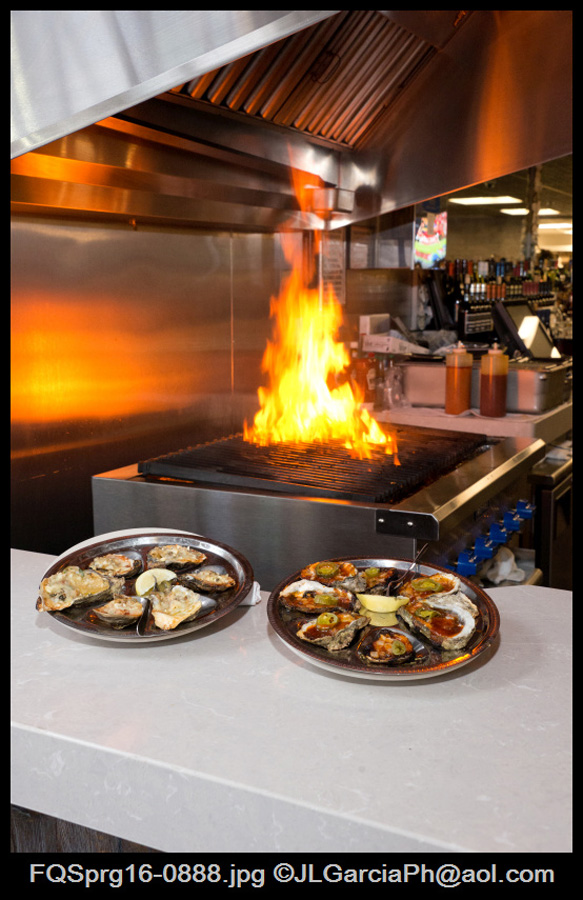 Visitors to New Orleans as well as residents make it a point to spend time in the neighborhood for which the city is justly renowned. Everyone, no matter how short or long the visit, spends time in the French Quarter.

While the French Quarter’s architectural style is actually Spanish -- two great fires in the late 1700s when the city was ruled by Spain, followed by the area being rebuilt in that country’s colonial style -- the wonders of the district never fail to enchant. Art and antique galleries, a myriad of boutiques, music clubs, cocktail bars, and restaurants, all bid everyone welcome.

While the pleasures of the Quarter are numerous, it usually is the dining that causes the most discussion among travelers and locals alike. The cuisine of New Orleans is famous, and rightly so, thanks to indigenous ingredients and classic methods of preparation that are done to perfection.

In the very middle of this busy district is the Royal House Café, located on one the Quarter’s most famous streets, Royal Street, at the intersection of St. Louis, another well-known street. It is at the Royal House Café where native preparation meets indigenous ingredients and the results are simply astounding.

Oysters are served year-round in a wide variety of preparations, or with no preparation whatsoever, as in their natural state: raw! Fried seafood is done to perfection. The dishes on which New Orleans’ culinary reputation is built are served here in traditional fashion, which is to say simply delicious.

Jambalaya, red beans, gumbo, bisque, po-boys, crab claws and meat, etoufee, redfish, and some of the finest steaks served anywhere are all here, assuring that everyone will have anything they want, prepared just the way they like it.

There is balcony dining if desired, or enjoy the experience from a comfortable vantage point in the interior of this historic setting and watch the continual floor show that passes by on the street,

No matter where else you dine in the Crescent City, your Royal House Oyster Bar and Café experience will remain a fond memory and a topic of lively conversation!

The rich, authentic native cuisine of New Orleans is one of the magnets that attracts people from around the world. Who doesn’t enjoy a bowl of filé gumbo, a plate of red beans, a savory crawfish etoufee, or that universal comfort food, fried chicken?

While there are many restaurants in town in which to enjoy such local favorites, one of the best that is frequented by locals is Praline Connection. For over 25 years, this restaurant, with two locations, has been serving the dishes on which New Orleans built its reputation for great dining.

Back in 1990, Curtis and Gloria Moore and Cecil Kaigler developed a food delivery concept to assist busy mothers who did not have the time to properly create meals for their families. These native New Orleanians knew very well the joy and rewards of home-cooking because that’s how they were raised. It soon became obvious that the ability to deliver was not going to satisfy the demand, so in 1990 they opened the doors to their restaurant on Frenchmen Street in the Faubourg Marigny, the first suburb of New Orleans just below the French Quarter.

The restaurant was a smashing success from opening day. Serving the three styles of cuisines that are so important to the history of New Orleans — Soul, Creole and Cajun — these talented and dedicated culinary artists do not hold back with flavors or proper ingredients.

An interesting side development is that the Praline Connection was an early supporter of the entire Marigny entertainment district. Music venues are all around the restaurant. Some of the best and most well-known local artists perform at nearby clubs every night.

If you miss the chance to have the Praline Connection’s real tastes of New Orleans in the Marigny, and there’s a flight in your future, you can also catch the same great food, and your plane, at New Orleans' Louis Armstrong International Airport.

And while we’re on the subject, a new, traditional New Orleans restaurant, Creole House, recently opened its doors on the city’s major thoroughfare, Canal Street, which forms the upriver boundary of the French Quarter.

Canal Street was originally planned as a real canal to act as a divider between the French and Creole neighborhoods of the Vieux Carre and the American Sector which incudes the Central Business District and Warehouse District. The canal was never built, however, and the street, instead, provides that boundary. Canal Street also divides uptown – the part of the city that lies upriver – and downtown, the land on the downriver side of Canal Street.

Because the layout of the city follows the twists and turns of the River, these descriptives are used to give directions. Rather than north, south, east or west, compass points in New Orleans become, uptown or downtown; and upriver or downriver, according to proximity to the Mississippi River; and proximity to Lake Pontchartrain. Since no one can really tell exactly where they are from a compass, local directions become, “I’ll be on the downtown, lake corner,” or, something like, “Let’s meet on the uptown river side.”

As for Creole House, it can be found on the downtown, lake side just off the corner of Canal and Decatur streets. The restaurant is nestled among nearby attractions like the Aquarium of the Americas, Audubon Butterfly Garden and Insectarium in the historic Custom House, movie theatres with adult beverages, other restaurants, hotels, bars and shopping …all in close vicinity.

Creole House offers a full menu all day, so stopping by for a drink, snack, quick lunch or even a 4 to 5-course dinner is easy and can be a comfortable break to recharge from shopping, museum hopping and other area activities.

In addition to the restaurant’s fresh shucked raw oysters, chargrilled, bacon garlic and other sauce-topped baked varieties of the bi-valves are available.

Traditional Chicken and Andouille Gumbo, French Onion Soup and a quartet of salads can be enjoyed as appetizers or entrée portions. Sandwiches include a large variety of famous po-boys as well as the muffaletta, both originating in New Orleans.

For larger plates entrees span the gamut from Seafood Platters, to “A Taste of the Bayou,” to Shrimp & Grits, Canal Street Redfish to Black Angus Rib-Eye Steak. And many more offerings.

And now for something different… but equally enchanting! New Orleans’ fare is much more expansive than the traditional Creole and Cajun food the city is known for …. That gumbo pot of explorers, pirates, settlers, immigrants, etc., who blew by here over the past nearly 300 years, have all left their mark – or skillet – firmly imprinted on New Orleans’ culinary culture. The city’s cuisine emerged over time from the intermingling and sharing of ingredients, roots, herbs, techniques and styles, all brought here through the Port of New Orleans from just about every nation on earth.

While bowing in gratitude to everyone who shared their most treasured cooking experiences, recipes and historical methods, we need to give a salute to the efforts of Latitude 29’s Jeff “Beachbum” Berry, whose passion, talent and dedication drove him to revitalize the Tiki culture for younger generations.

He traveled the world to learn more and gather lost recipes of sacred, secret drinks and collect existing artifacts He toured and lectured, personally reviving the concept of Tiki culture, publishing 6 books about Tiki with his wife, author Annene Kaye.

The couple opened Latitude 29, their fabulous Tiki bar and restaurant just a little more than a year ago. In a very short time, it has become “the place” to go. The drinks alone can make enthusiasts want to hug the bartender! They are that good!

All the original classic and famous Tiki drinks are here like Mai Tai, Navy Grog, Zombie, Missionary’s Downfall and others along with many new creations.

The food is excellent, with starters like the Dumpling Burger, a grilled pork-stuffing patty; classic Bacon-Wrapped Rumaki; Shrimp in Blankets; Sweet and Savory Pork Ribs; and a Five-Spice Pork Rillette.

The food and drinks are spectacular, the ambience welcoming and the picture perfect surroundings make for a very special evening.