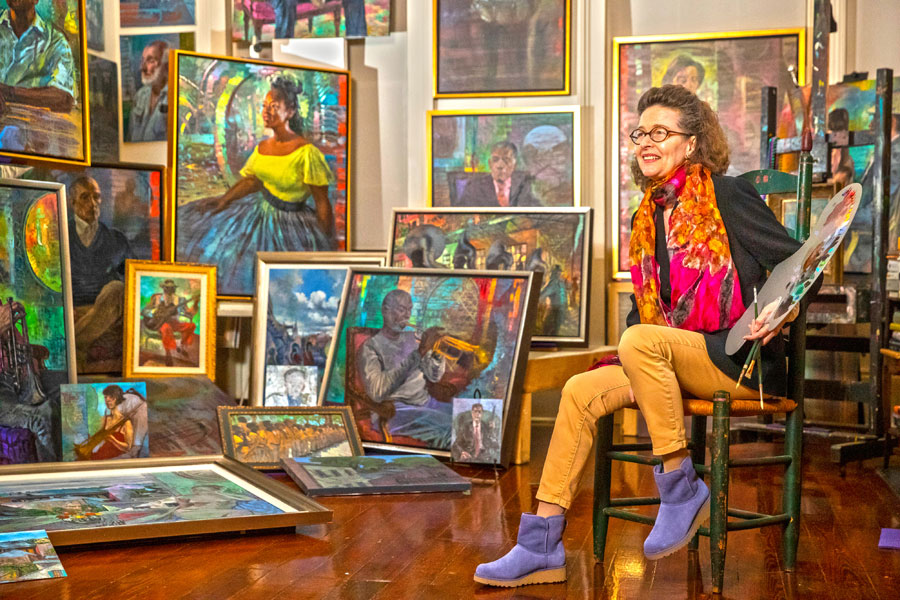 Artist Emilie Rhys will be celebrating the start of 2020 with a historic exhibit at the New Orleans Jazz Museum. Featuring her work together with that of her father, Noel Rockmore, this will be the first time the two artists have been celebrated in one showing. Rhys brings her live oil portraiture to the event in a magnificent scale; the sizes of the pieces are notable with some as large as 30 x 40 inches. Emilie has gained fame for her live sitting portraits, and this show is no exception. The work has been created over multiple sittings with musicians in her studio. Only one piece was not created live. That is the largest piece measuring 48 x 60 inches, featuring a 12 or 13-year-old Louis Armstrong along with the brass band from the Colored Waif’s Home of New Orleans.

Rhys used historical pictures to create the centerpiece of the show. With an opening date of January 30, 2020, the New Orleans Jazz Museum will host the show New Orleans Music Observed: The Art of Noel Rockmore and Emilie Rhys.

Rockmore claimed local fame after his career flourished in New York City. His series at Preservation Hall stands out as some of the city’s most iconic paintings in any one location and draws crowds there to see the work. Rockmore’s part of the father-daughter show will take paintings from the Preservation Hall collection, the Historic New Orleans Collection, and the Ogden Museum (my personal favorite collection of his) and join them together with live paintings and studio portraiture.

A secret for those smart enough to attend the show is that, despite having worked in oils for over 40 years, Emilie has become known more for her pen and ink work, the main focus of her career. She took a detour and refocused on oil paints specifically for this show.

The highlight and the sole mural in the show is one that was created by Rockmore in 1977 with some painterly assistance from Emilie Rhys herself when she was around the age of 20. The fact that the father-daughter pair have only recently become celebrated again after a nearly twenty year gap adds a poignant note to an exhibition that some may say is long overdue.

Keep your eyes peeled around Satchmo Fest for a catalog of the show featuring a major biographical story by local author John Ed Bradley in addition to round table discussions between Emilie and musicians about the challenges of “music art.” The catalog is designed not only to celebrate the artists but the act of live musical portraiture and painting.

The show will run at the New Orleans Jazz Museum through Labor Day weekend and is a must- see for musicians and art lovers--great minds and talents coming together to bring an experience the likes of which New Orleans has rarely seen.