Excellence... Anything but Plain & Simple THNOC Art of the City: Postmodern to Post-Katrina 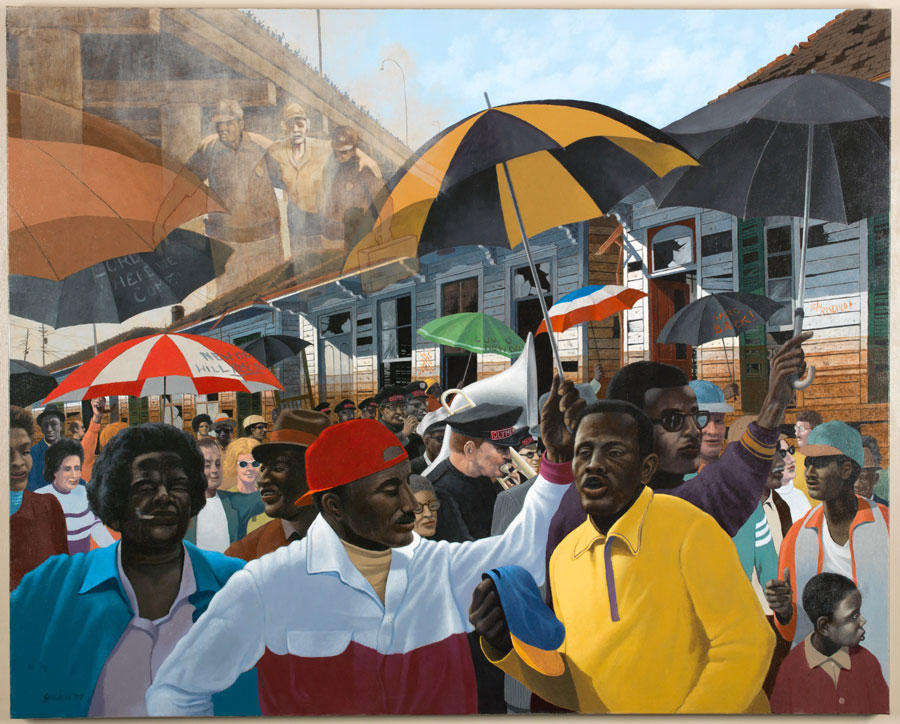 Once upon a time, on a flight to a faraway land, a boy met a very wise man who shared a bit of knowledge. As the boy complained about stiff seats, weak cocktails, and being bumped to coach, the man told the boy that, often times, the best part about getting to a new place is the how you get there, more so than the destination itself. When the flight was over, and the boy decided that he had sat next to a crazy person all the way to London, he stopped and thought about the man’s words. Yes, the boy thought, I most definitely sat next to a crazy person.

New Orleans, in particular, is one of those places where the journeys are supremely interesting. Ask anyone who lives here, and we will tell you we love the spring--festival season, the oak trees, and the streetcars. But ask us how we got here and you just might find some very interesting tales peppered with Southern flare and even a dash of unexpected charm. My friends have their own stories that we tell amongst ourselves on a regular basis. Adam came to New Orleans to change the world one mind at time by teaching public school; Marti came to learn to cook; Frank came to flip houses and ended up flipping his lid over a bartender at The Saturn Lounge; and as for my own story, we can just leave that with a 5,6,7,8...Thank you, Miss Rose. Our stories are what make us, and we make New Orleans. Or is it the other way around?

The Historic New Orleans Collection has long been a catalyst for celebrating our city and the people who have made it a place that locals love and visitors can’t wait to come back to. Positioned in the center of it all on Royal Street, this impressive display of knowledge and love for New Orleans’ journey through time is evident the moment you step through the museum’s doors. THNOC’s journey has recently taken a new and exciting turn of its own. With the renovation and restoration of 520 Royal Street, formerly WDSU television news headquarters, the collection has added the Art of the City: Postmodern to Post-Katrina, presented by The Helis Foundation exhibit to its world-class collection. Art of the City’s focus is on artists who have deeply invested in the journey of New Orleans, from the 1984 World’s Fair to the present. Whether they are local artists or artists drawn to the city and its enigmatic energy, this is an assemblage of life in New Orleans over the past three decades.

Guest curator and local artist, Jan Gilbert, can be credited for the vitality of the collection. Assisted by Priscilla Lawrence, President and CEO of THNOC, Gilbert managed to select, arrange, and depict a hands-on journey of the New Orleans art landscape. “I wanted to curate this as if you were walking through New Orleans with a dash of this neighborhood and then a dash of another,” Gilbert said as she beamed standing in front of a painting of a shotgun house credited to Jamie Mitchell. “You may know him as Michalopoulos,” she said, smiling. That is when I realized this collection is not just a collection of art, but also an eruption of love, admiration, and hope. Gilbert and Lawrence have succeeded in sending us on a whirlwind tour of New Orleans neighborhood by neighborhood. The city comes to life visually and the best part is realizing just how much you know about our city that you didn’t even know you knew. The journey through the collection is riveting, humbling, and most importantly, inspiring. The duo has assembled approximately 75 artists that rode the waves of changes, adversity, and celebrations in a city known for its multicultural and multidirectional thinking.

The galleries encompass works from artists like William Greiner, whose piece “Loungers” is a view from the roof of the New Orleans Athletic Club, a skyline we see every day. Behind the care and deliberateness of the exhibit, though, this regular vision becomes a beacon of pride.

A particularly enticing piece of the collection is the mannequin commissioned posthumously by the widow Antoinette K-Doe of her late husband Ernie, the iconic, self-proclaimed “Emperor Of The World.” The mannequin would accompany Antoinette on her car rides through the city and made her as much a local celebrity as the magnanimous man to whom she was married.

Deborah Luster works her way into the collection with, perhaps, the most controversial images. Her collection of gelatin silver prints of homicide scenes are shot in a circle and give the impression that you could be seeing the location through either a camera’s lens, or the barrel of a gun. It captures you and gives just a bite-sized taste of some of the urban dangers we face as we journey through paradise.

Humor is no stranger to this city we love, and you will get a dash of just that with Page Moran’s “Tennessee’s Nuts.” Encased in a glass cube are actual pecans taken from the tree that once stood at Tennessee Williams’ home on Dumaine Street. The installation tells the story of Moran and her relationship with Williams’ handyman, Mr. Campbell. Quintessentially New Orleans is all I can say about this, a loving play on the idea that Tennessee Williams’ eccentric reputation and often outlandish behavior will not be forgotten amongst New Orleanians.

Krista Jurisich, Elizabeth Catlett, and George Dureau are just a few of the other iconic creators included. Gilbert chose a fabulous entry for Dureau: a piece that is a departure from what became his most recognizable and iconic work, “View from My Balcony,” is an image of the artist’s literal origins, illustrating where he began as an artist. The list of collaborators and influencers seems virtually endless, and the exhibition is punctuated with state-of-the-art touch screen, interactive media. Visitors to Art of the City can bank on ever-changing and growing additions at THNOC, including more multimedia and cutting edge technology designed to embrace the organization’s mission to bring us closer to our roots.

One of the most impressively curated, continuing collections to date, its sheer perfection should come as no surprise to anyone familiar with the strong and intelligent backbone that Pricilla Lawrence offers. As the leader of this effort to teach us about the world in which we live, this New Orleans we love, Lawrence and her all-star staff guides viewers to respect the journeys of those who got us to where we are today. In the end, we’ve been shown that The Historic New Orleans Collection is, and will continue to be, a leader amongst history museums.

Art of the City marks the organization as a critical locale for New Orleanians to learn about themselves, their city, and their fellow inhabitants. More importantly, it has become a place that gives meaning to our journey, and the journeys of those who came before us. Our journeys are an influential part of the core that defines the person we are, and the things that we will bring into the world we share. How we got here, or anywhere, is truly an amazing part of us whether we realize it or not.

It wasn’t until many years later that the boy, now a man, understood what the travelling stranger meant. Sometimes you have to put down the inflight magazine and listen to someone else tell you about the path you are about to take. It’s in that moment, when you are listening, that you can sit back and enjoy where you’ve been, where you’re going, and, most importantly, how you got here.